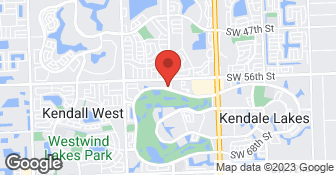 Our Certified Home Inspectors will spend three to four hours thoroughly evaluating all aspects of the Property you are purchasing, from the Roof to the Basement and all areas in between... We want you to come along with us during the course of the home inspection in Miami. Okay, if you're a seasoned home buyer it may not be as important that you're there the entire time. However, if you are new to the home buying process, it's very important that you're there from start to finish. We'll not only inspect the house you're buying, but we'll share with you what needs to be maintained and why. You'll get a real education about your new home....

This experience was frustrating from the very beginning! When I tried to make the reservation, it wouldn't accept my information. I called the following day and spent almost 30 minutes on the phone with Atlantic trying to resolve the issue. Their representative finally said, "Contact your bank or American Express... something is wrong with your card." She then paused and said, "Oh, we don't accept Amex." Totally aggravating and unnecessary when that should have been made very clear from the beginning, and certainly a known issue for an employee. The inspection itself went fine and I paid for an additional mold test on top of the $800 I already spent. After that, it became EXTREMELY difficult to have anyone answer my questions. I texted. I emailed. I left voicemails. It took me 3 days to get an inspector to finally call me back to discuss the results. I shared these results with an industrial hygienist who was very concerned about the method of sampling. No outdoor sample was made for a comparison, which he explained is like speeding but without having anything to compare it to the numbers are meaningless. No samples were taken in either bedroom, where one had visible issues with the ceiling. I ultimately paid for another company to come in and do a proper mold inspection. The second company found TOXIC MOLD in the bedroom that Atlantic did not detect! Both realtors involved in the transaction were a bit surprised how unprofessional Atlantic was and I certainly would not recommend them to anyone.

While still Indiana resident, requested pre-closing inspection by Atlantic Building Inspections to buy condominium in West Palm Beach, Inspection came clean in February 2020, and I closed on the property. After all COVID-19 troubles during the this yearn and my apartment staying empty all time I moved in 10 days ago. Turns out that the refrigerator's frame is irreparably broken, dishwasher is not functional, several handles in the bathrooms are not functioning properly, outside water outlet is defective. I contacted Atlantic to inquire why such lousy service was performed and how the inspector missed all these problems. The response of the owner was: (1) the person who performed this service left the company, and Atlantic thus does not bear any responsibility (2) many things could have happened inside my apartment blatantly implying that I lie about condo being empty before I moved in, (3) they are going to do nothing to satisfy the issue. I can prove any point I made above and will go to a small court in WPB to defend my consumer rights. Just wonder why this self-proclaimed "reputable" company can't find a way to satisfy the customer as opposed to respond with empty words online. Caveat emptor Alex Khariton

We bought a home recently and due to the review decided to go with this company. Shortly after moving in we realized that by having the main area lights on and plugging something into an outlet it would trip the breaker. We did not have to try hard to make this happen multiple times. We called an electrician and he was surprised to see multiple rooms all wired to the same circuit. Also a huge fire hazard by having a 20 amp running to a 15 amp. When we reached out to them they sent us pictures from our installation showing "lights on and the AC on" meaning that the breaker didn't trip so there was no problem. This was $1000 in electric work that they are claiming didn't exist. EVERYTHING they did is something I could have done myself. Our electrician was angry that they had not done their job and was saying that it was not up to code. We are also having some major sewer issues that would not have been hard to find but you will need to pay someone else as they do not look in anything. This makes the sewer warranty useless. I would plead you to use a different company.

Their report said, "The air conditioning system operated with normal control today and is functioning as intended." That's bogus. I don't think it was functioning properly. What stood out was that they failed to find a faulty air conditioning. As soon as we did the final walk-through on the home, we found out that it was faulty. So they should have found that, it wasn't just thermostat.

Everything went great. Miguel called prior to the appointment to let us know he was on his way. He showed up on time and went right to work. He was very polite. Out attic is very difficult to get into and he got right up there and did what he needed to do without any complaint. Our mitigation survey was prepared the same day and sent to us within a few hours. Very professional. Will definitely use Atlantic Building Inspections again in the future.

They are just very well organized. Everything was on line as far as the setup was concerned.

Twice I used ABI and their Inspector Miguel Chirino. First time he spent 6 hours inspecting a house we wanted to buy and he did an outstanding job (more than 400 pictures were taken). Nothing at all went unnoticed and thanks to them we decided that property was not for us. The 2nd. time was another house (much newer) and Miguel was again he Inspector (we asked for him). He confirmed the level of professionalism he had before and his opinion made us buy this one. I hope i won't need another Inspection in years but if I do i'd not hesitate for a minute nor shop around for another Inspection Company as ABI had it all

I was not present for the inspection due to work related complications; however, inspection was done as promised and report was very easy to read/understand.

The inspector was on time and professional. The report was provided via email in approximately 3 days from inspection as agreed. I have no complaints with this service.

Description of Work
Commercial inspection on a 4 plex

Dear (Member name removed), Thank you for taking you, valuable, time to write this review of our work. Good luck with your purchase and please let us know if you need anything else.
5.0

Boy, am I glad I found Carlos on Angie's List. In a city filled with charlatans and fly-by-night contractors, Carlos was a breath of fresh air from beginning to end. First, it was easy to schedule the appointment. His answering service was prompt, attentive, and scheduled the appointment with no problems. Second, follow-up was great. They make appropriate use of email, text messaging, and phone calls to confirm, schedule, and remind you of the appointment. Payment, disclosures, etc., were all handled electronically, which is my preference, but I'm sure they can accommodate old-school methods as well. Guess what! They actually arrived on time! What a treat. Carlos should up with another one of his inspectors and the guy from the termite inspection company they subcontract out to arrived shortly thereafter. All were very courteous, professional, and thorough. The inspection was very thorough. When buying our last home, the inspection took about 45 minutes. Carlos's inspection took about 3 hours. The house was inspected from top to bottom. I tried to stay out of his way and let him do his job. When a couple of major issues popped up, he would call me over to explain and after the whole inspection was over, we chatted for a good 20 minutes to debrief. He struck the perfect balance between letting us know the magnitude of the issues encountered. In other words, he didn't minimize the issues or make them seem worse than they were "just to cover his butt." Briefly, this house looked beautiful and it was in a beautiful neighborhood. Guess what the inspection revealed ----- it was a painted pig (my words, not Carlos'). I can't even begin to tell you all of the major things that were wrong with it, several that were fundamental structural problems that we would not have discovered if a thorough inspection was not done. I won't lie, we were terribly disappointed with the outcome, we loved the house, but we were so glad to know exactly what we would have been walking into, and we chose to walk away. It was also not pleasant to have spent $625 on these inspections (the house inspection only was $375 or so, but we also scheduled to do the other inspections) and not have a house or deal to show for it. However, god knows who much it would have cost us to deal with the issues the house had if we had moved forward. In sum, I could not be happier with Carlos and his company. I would use them again (and did -- see another review) and would highly recommend him.

We are a family owned and operated property restoration company in SFL. We rehabilitate properties after disasters from storms/hurricanes to pre loss conditions. Apart from our core buisness we offer professional and affordable pressure washing services. We are licensed and insured.  …

Full- Service Residential and Commercial recovery for mold, water, and fire remediation. At IES, we have cleaning, mitigation, remediation and restoration certified and licensed professionals&nbsp;ready fo respond at a moment’s notice. We deal with all types and sizes of water, sewage or mud damage. We guaranty proper assessment using the most up to date equipment to effectively dry out your home or business. Our goal is to prevent secondary damages while keeping the integrity of your residence or business and safely, swiftly get your life back to normal.  …

*All work supervised by Gary Rosen PhD Biochemistry/Molecular Biology (UCLA). *We do not use any hazardous chemicals that leave a chemical residue. We are a green, chemical free company. *State licensed building contractor with a specialty in mold and water damage. Florida state licensed mold contractor. Building contractor's insurance PLUS mold/environmental professional liability insurance. *Mold Assessment for Mold Sensitive People (combination of testing and inspection to find what air testing alone cannot find). * Non-emergency sewage and bio-cleanup. *Most mold/water damage jobs involving a few areas can be completed in 1-2 days including remediation and drywall build back. **Free Estimates for Homeowners Only.  …

Insured
All statements concerning insurance, licenses, and bonds are informational only, and are self-reported. Since insurance, licenses and bonds can expire and can be cancelled, homeowners should always check such information for themselves.To find more licensing information for your state, visit our Find Licensing Requirements page.
General Information
Free Estimates
Yes
Eco-Friendly Accreditations
No
Payment Options
Check, Visa, MasterCard, American Express, PayPal
Senior Discount
5%
Warranties
No

Atlantic Building Inspections is currently rated 4.5 overall out of 5.

No, Atlantic Building Inspections does not offer eco-friendly accreditations.

No, Atlantic Building Inspections does not offer a senior discount.

No, Atlantic Building Inspections does not offer warranties.

Are there any services Atlantic Building Inspections does not offer?