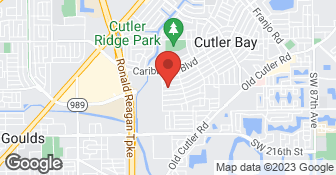 Agramontes Painting has been on Angie's List since 2006 and we are experienced, licensed professional painters. We do both interior and exterior painting. We also provide expert pressure washing services to include roofs, driveways, pool decks and boats. You will be pleased with our work, please read our work history. Our customers are number 1 with us!...

Oscar from Agramontes Painting was very amicable, punctual and accomodating. He had already packed everything into his truck to leave when my wife pointed out a small detail he missed. Without hesitation, he unloaded everything and touched up the spot. He did not leave a mess, which was most important for me. He left paint only where it was supposed to be! He did a considerable amount of repair work. Three other Angie's List top rated painters came out for an estimate. Only one of these three painters emailed an estimate for almost four times ($5,500) what Agramontes Painting charged. The other two gave me verbal estimates after they inspected my property, but never emailed me the estimate. Both wanted more than Agramontes Painting. None of them ever provided proof of insurance or contractor's license. I called two other painters, not on Angie's List, who did work for me before. One never called back. The other asked me to send photos of the house, which I did, but I never heard back from him. Doesn't seem like anybody needs the work! Times must be good! When Oscar came to see the house he gave me a written estimate on the spot and gave me copies of his insurance and license. I'm not an expert, but I cannot imagine the $5,500 job would look any better or last any longer than what I got for $1,500. Also, the other painters wanted me to move all kinds stuff out of the way, including a gazebo. Since they all asked me to move these, I asked Oscar if he wanted me to move these items. He said he would work around them and he did.

My elderly parents needed their home painted. I would highly recommend this company. Oscar not only did a wonderful job but also assisted/helped my parents in making decisions of colors, etc. He was very professional and went out of his way to please my parents. My parents were not only super happy with the finished product but enjoyed having Oscar at the house. He was very reasonable when compared to other companies. I would highly recommend him. Is very refreshing to receive such great customer service.

Description of Work
Exterior painting of a residence

We are remodeling our home and the last step was to paint our home. We called this company and a few others to shop around, but we decided to hire them. Nice and hard working people. Fair prices. They get the job done right and fast.

Exceedingly well. Oscar returned my call within a day, visited my residence the next day and provided a quote. Was able to start that same week and did a fantastic job on our house. Like it was his own. Warm, professional and dedicated to his craft. I would recommend Agramontes to anyone that needs to paint their house.

The job was nicely done and the also did power washing and exterior painting, they did a great job.

Description of Work
They did a interior painting.

he did a nice job with the pressure cleaning and painting...in the process he broke the skylight and put a piece of plastic to cover the hole.

Description of Work
pressure cleaning and painting of roof

Mr. Sanchez is a consummate professional. He arrived early for the estimate inspection and gladly answered any questions I had concerning the painting process. Once we decided to utilize Agramontes for our painting needs, Mr. Sanchez arrived early and explained what would tasks would take place each day. Mr. Sanchez displayed a can-do attitude and a wealth of knowledge concerning the painting process. It was a pleasure not having to fret over the details. We are very happy with the final product.

excellent. Oscar is a gentleman. He is very punctual, courteous, and is a very hard worker. always willing to help and please his customer.

Description of Work
our house need a painting and some minor repairs.

Fair price and excellent work. Finished ahead of schedule and was very punctual and professional.

not great! I don't know what paint he used or what color to fix the areas that are bubbling.

Description of Work
Oscar painted my home 2 years ago. For a residence, the painting job was sloppy. He forgot sections of the house and I had to call him back several times. The paint is now 2 yrs. old and is bubbling in places. The paint is under warrantee but I am happy to pay to have it fixed. Oscar is nowhere to be found. I have called him a dozen times to find out what type of paint he used and the color so that I could match it. No returned phone call in weeks. Oscar is a very nice guy but 2 yrs. after getting my house painted and paying over $11,000 I may have to re-paint it!

Description of Work
Pressure clean and paint roof and fence

Agramontes Painting was very knowledgeable and patience with all my questions .His crew was very respectful and efficient. had a lot of attention on detail and am very happy with the outcome of the paint.He used the best products that Sherwin Williams has to offer .He pressure washed,primed,and..

Very well as usual ; I’ve used their services before and highly recommend it.

Excellent job . Mr.Sanchez is an excellent painter overall as a handyman. Not only he performed a great job but was always on top of every detail of everything that had to do with the exterior and interior of the house. Always on time and willing to make His job a perfect one. I highly recommend Him for any future job in my House.

Description of Work
Painting exterior and interior and washing outside walls

Oscar finished the work on my home and I was very happy with the quality of work, from his professionalism, punctuality in finishing my home on time, and through his hard work making sure every detail on my house was perfect. He finished my home, and my father was so impressed that he hired him to paint his house as well, his house also came out exceptionally well. He did a truly fantastic job!

Oscar kept changing little things he was going to do. He was supposed to fix some wood, fix windows, do a lot of caulking and holes that needed to be filled. Some of this was done, but not all. The day I inspected the paint job I found over 30 areas in the front of the house alone where the paint job was not acceptable. The trim around the windows was not properly done because the paint was bleeding. The front door was not painted properly. There are areas where I can still see the old color on the door. Evidently he didn't put 2 coats on the door. There are many areas where you can see the old color underneath the new color. No tape was used on the windows. There was a lot of paint that we had to scrape off of the windows. There are parts of the roof that are brown now because he didn't cover the roof when he sprayed. When I questioned him he was very insulted, as was I. I'm not sure why he thinks someone would accept this kind of work. I have hired another painter to fix all of the areas that are not acceptable to me. Oscar was extremely unprofessional when I addressed my concerns and I feel like I have been ripped off.

Description of Work
I hired Agramontes Painting to do some exterior painting.

IT WAS FANTASTIC!!!! OSCAR IS GREAT AND VERY EASY TO WORK WITH ON EVERY PROJECT. HE TRULY GIVES 1000%.

He was a total professional. He showed up on time, finished when he said. His prices were fair, willing to negotiate. We were very happy with him. He did a great job and is above board. He went above the call of duty. If I was going to recommend a painter, he would get my recommendation.

Description of Work
They did a painting project for our townhouse community.

It went absolutely perfect! Oscar is a total gem and he is very responsible He goes out of his way to make you know you got your money's worth AND HE COMPLETELY DELIVERS. He will be our permanent painter.

Everything went great! Oscar was very accommodating and did nit rush or become agitated when we stalled when trying to choose the right color paint. He was always on to,e and very thorough. He pressure cleaned the entire property, even areas he wasn't painting. Our house looks incredible! I would highly recommend. We've been doing projects on our house for over two years straight and these were the finishing touches. Oscar was the easiest and most honest and professional person we dealt with. It was a nice change of pace form the hassles and problems we've encountered with every other person we have dealt with.

Description of Work
Entire house(exterior) painted - including the gate, storage shed and driveway.

We used Oscar to do interior painting on our home and the work he did was horrible. There are visible streaks of the paint roller all over the house and the quality of paint he used was vey poor. The paint is not holding up and has discolored. We have been calling him to come back and fix the work he did and he does not return the calls.

Agramontes Painting did an excellent job in the required assets. Very organized and clean. Showed much responsibility and care for his job. The job was done on time with a reasonable price.

Description of Work
Paint for the exterior, painting for interior, and pressure washing.

Never responded to message posted here or to phone voicemail

IT WAS ABSOLUTELY FANTASTIC!!! OSCAR WAS SO PROFESSIONAL AND ALWAYS ON TIME. HIS WORK WAS SO WONDERFUL! I PLAN ON HIRING HIM OVER AND OVER AGAIN UNTIL WE SELL OUR HOME. HE REALLY BROUGHT OUR HOME BACK TO LIFE!!!

Description of Work
The outside of the house painted, The driveway painted, roof steam cleaning, trim,doors,back and front patio and porch painted.

Zoom locksmith can do it all. Fast and Reliable service. We have the experience and dedication to bring your dreams to reality! We guarantee your satisfaction, and we won’t leave until the job is done right. Our team has quality experience in this industry, and we make sure our customers are happy before we leave. Call or click to schedule an estimate today!  …

*Super Service Award Winner* A-Best Locksmith has been a leader in the locksmith business for over 15 years. We offer reliable service, quality workmanship, and competitive prices, 24 hours a day, 7 days a week. No job too big or small we do it all. Contact A-Best Locksmith Today!  …

Bonded
Insured
All statements concerning insurance, licenses, and bonds are informational only, and are self-reported. Since insurance, licenses and bonds can expire and can be cancelled, homeowners should always check such information for themselves.To find more licensing information for your state, visit our Find Licensing Requirements page.
General Information
Free Estimates
Yes
Eco-Friendly Accreditations
No
Payment Options
Check
Senior Discount
10%
Emergency Service
Yes
Warranties
No

How is Agramontes Painting overall rated?

Agramontes Painting is currently rated 4.8 overall out of 5.

What days are Agramontes Painting open?

No, Agramontes Painting does not offer eco-friendly accreditations.

Are warranties offered by Agramontes Painting?

No, Agramontes Painting does not offer warranties.

What services does Agramontes Painting offer?