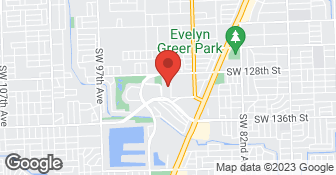 Description of Work
They were contracted to install floors in my new home. He asked that I pay with a check. Horrible mistake. He stole our money and did not install our floors. We had to sue him. We settled with a mediator and he never paid the settlement. He has been sued and has stolen money from countless customers.

Description of Work
Came and measured one day. Installed it the next day. VERY professional and recommend this company for any of your flooring needs

The owner, Rob, is very professional and courteous. He helped me decide between the various carpets I was considering and gave me a very good price. Other stores in the area did not even come close to his price. He said it is because he does a lot of large volume commercial jobs that give him access to wholesale prices that his competition cannot get. That is possible as, for example, they are the only company that is allowed to install flooring in my office building (which is what gave a peace of mind about going with the lowest bidder). About 10 days after we placed the order, the carpet arrived and a very professional crew of 3 installers and 2 carpenters installed the carpet in one day. That is remarkable because normally a 1500 square foot job that includes stairs and having to move a lot of furniture takes at least two days. The carpenters were there to take apart our canopy bed professionally and to screw in our sub-floor that was lose. Given all the extra work needed to be done by the carpenters makes the price even more remarkable. The only negative that I have found is that in some places they did not fit the padding under the carpet very well and you can feel the gap as you walk. The install crew was very professional and fast, but you could tell that they were used to commercial jobs where speed sometimes takes precedence over precision. Again, the overall quality is great and I would request the same crew again if I needed carpet installed, but I am a perfectionist and the gaps in the padding are minor imperfections that could have been avoided. I will use Rob and Ace Flooring for all my carpet needs in Miami.

Description of Work
They replaced the carpet in the upstairs area of my house with a really high end and durable carpet.

Description of Work
We had the entire floor of our 3100 square foot home taken out, and we had both tile and air brushed laminate installed.

Overall the project went pretty well. We had to have hurricane shutters removed by another company before the tile could be replaced. Since we live in a high rise condominium, there are hoops to jump through to get approval from the Board of Directors before a permit could be issued by the City for the shutters to be removed so there were delays and coordination problems in getting the shutters removed and the tile replaced that were no fault of Ace Flooring. What I was not happy about, was that there was no protective covering placed over the tile in the living room leading out to the balconies. I placed protective plastic over the bedroom carpeting myself, and laid towels and sheets down over the living room tile to protect it. Even so, I still had to vacuum and mop the floors and wash the sheets and towels each time day after he left. I also had to clean the tile dust off the sliding glass doors and, since we live in a condominium, this had to be done by hand as you can't just hose it down like you would normally do in a home. The procedure would have much easier for me if rubber matting (or even cardboard) had been placed over the tile floors in the living area. Ace did a very nice job with selecting and replacing the tile, however, if I had it to do over again, I would have insisted that some protective covering be placed over the existing tiles in the living area so I didn't have to put so much work into cleaning up.

Description of Work
THEY REPLACED THE WOOD FLOORING IN THREE ROOMS.

We are committed to providing our customers with excellent customer service and flooring that is sustainable, affordable, and exquisite, giving your home or business an overall new and improved look. Nathan’s Carpet ensures that our customers are completely satisfied with every aspect of the work we do. We begin with you and end with you, no middleman involved. Contact us today for a free estimate. We do not offer Tile Flooring.  …

We specialize in installation, repairs, refinishing, staining, and bleaching of hardwood flooring. Our employees have been in this business for more than 15 yrs.  …

We are so proud to have won the 2013 Angie's List Super Service Award. We hold our customers' satisfaction to the utmost importance. Check out our great reviews so you understand why you should choose Red Fine Hardwood Floors over the competition. 5 employees. No subs. Cost determined by the job. Travel charges may apply. No service fees. ADDITIONAL CONTACT- ARMANDO DIAZ. .  …

Ace Flooring Systems Inc. is currently rated 4.2 overall out of 5.

No, Ace Flooring Systems Inc. does not offer eco-friendly accreditations.

No, Ace Flooring Systems Inc. does not offer a senior discount.