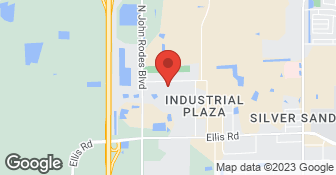 He sucks. He was to install windows for me and he had someone else to do the work that are not professional. The work was a little bit sloppy, disconnected my security alarms even though he told me that it won't be affected and I also bought some screen for bad weather and took 2 years for it and I think he had been collecting money upfront and he was out of business and called his office to follow-up but did not return phone calls. 10 months ago he came out to give solution bu we'll never work with them again. It was horrible and took them 2 years.

This was a nightmare. I want to be specific that the person responsible for this nightmare is Ron Catti who formerly operated under the business name "Total Home Enterprise". I originally signed a contract close to two years ago, and to date I am still waiting to have the job finished. The windows were installed fine. However, the nightmare started when I was waiting to have the Hurricane shutters installed. I financed the project through Enerbank, who has been very supportive and helpful with this issue. I was provided two separate checks, one to give to Ron Catti at the beginning of the job and the other on the date of the completion of the job. When the windows were installed, Ron Catti informed me that the shutters had been ordered and should be arriving any day. Due to fault of my own, I gave him the second half of the payment. I have since learned that this was a mistake, however I simply didn't know any better and trusted Ron Catti. This has been close to two years and the shutters still haven't been installed. After completion of the window project I waited a couple of weeks. I called Mr. Catti to follow up. He told me that he was waiting on the shipment. The weeks turned into months. I called him religiously until he simply stopped returning my calls. I mailed a certified letter to his place of business which was returned. I learned he closed his business. I called Enerbank to inform them of my dilemma. They were kind enough to start calling him too. About one year ago, someone came with the shutters. We learned that Ron Catti took the wrong measurements and the screens didn't fit. For the past year I have contacted him consistently. He stopped answering my calls or returning my calls. Enerbank did the same and he also stopped returning or answering the calls. When Enerbank used a different phone number, Mr. Catti answered, as he didn't recognize the number. He was informed that if he didn't install the shutters which were already paid for he would be sued. This went on for the last year. I finally asked my son to call him and Mr. Catti answered. My son informed him the shutters needed to be delivered immediately. When my son tried to follow up with Mr. Catti, he stopped answering his calls as well. My son used a different phone and needless to say, Mr. Catti answered. Now that he has my son's two numbers he will not answer them as well. Last Friday Mr. Catti dropped of the shutters and left. The hardware is missing and the shutters are not installed as of yet. I tried calling Mr. Catti but again he is not returning my calls. Enerbank will assist me in getting the screens installed as they feel bad that Mr. Catti let me down, didn't stand behind his work and lied to me for the past two years or simply avoided any phone calls at all. I will never use All Florida Exterior simply because Mr. Catti is now working there and his business manners are non existent. He does not stand behind his work or word. He will lie and avoid phone calls and is fast in collecting money for work not completed.

Description of Work
The provider, who was formerly known under a different business name, Total Home Enterprises operated by Ron Catti, installed windows in my house as well as Armor Screen Hurricane Shutters. He is now employed with All Florida Exteriors.

I had spent about 45 minutes with them and they were selling products, and I signed a contract. I had to pay them half down for the hurricane resistant windows. After they measured the windows, no one came back. After about 4 weeks, I called both of the numbers on the contract, and both numbers were non workable. I tried this for two months, and no answer. At that point I went to city hall, and reported this. I know now that no permit had been applied to do any work. There are several of us that our out a lot of money.

Description of Work
They originally came out to estimate to install four windows.

They said that it would take a couple of weeks. I called them after a few weeks and they said the supplies were not in yet. I called them back again for a third time and I didn't get an anwser. I gave them a deposit $1875.00 before the work was started. They never showed up and left town. The landlord of where their office is located didn't even know that they left.

Description of Work
They were supposed to install 6 windows on back porch and also install a stone door.

Initially the overall work went well once the work began. Chad Barnes was the foreman in charge of the actual work and was very courteous while working. Once the cabinets were refaced and the counter tops installed there were obvious mistakes that needed to be corrected. The countertop had a split in it and because it was one piece, a new one would have to be reordered and replaced. The caulking all around was uneven and very messy looking and it was agreed would also need to be redone. There were a couple of places where the facing was loose and glue was used very sloppily. One of the doors had a knick on it and was reordered as well as some of the nail gun holes were not filled. One corner of the countertop was left with a very sharp edge that ripped a brand new blouse of mine and needs to be replaced. Because we have a lifetime guarantee on the cabinets and a 5 year guarantee on the countertop I believed Chad when he said that as soon as the replacement top was in (in about a week) he would return to correct all of the mistakes. He lead me to believe that his men (helpers) would not be able to be paid until our job was paid for,so in my lack of judgment I paid and thus the saga begins. Calls to Chad went unanswered except for the occasional excuse call as to why he would not be able to make it. A week turned to a month and so on, I finally notified Ron Catti(owner\operator) and to his credit he did come out and take pictures and was puzzled as to the messy work, because Chad was "one of the best in the business." To his discredit he promised that the work would be corrected and done in a timely manner. Well the check was cashed in June and I am still waiting for Mr. Catti (Total Home Ent) to come and correct the mistakes. Initially I did place a restriction on them that I (not my husband) needed to be present which would have limited time restraints, but then opened it up to anytime and still have not had any further response.

Considering the weather it did not take them long to paint my entire house. The quality of the job was excellent, my house looks really beautiful. The price was a little high but not bad. I would recommend them to anyone.

Description of Work
I had him paint the entire exterior of my home, windows, trim, doors, eaves and gutters. My home is 3,912 square feet and the work took him 4-5 days considering the weather.

The Painterman and Son LLC

We provide interior and exterior painting services in Brevard County. Drywall repair is available for preparation of interior painting surfaces. Experience, quality, and excellent customer service set us apart from the rest. We always show up and we complete the job to your satisfaction. The Painterman and Son is a family owned and operated business with 35 years of experience in drywall repair and painting. While we are a new business to the area, we look forward to serving the Brevard County community with pride.  …

*** We are still accepting all service call requests. Minor or major issues are welcomed. We can service your home with minimal physical contact and can even pay online! Our safety measures have increased dramatically due to the COVID virus. And will use every measure possible to keep you, your family and our employees safe! *** Top Coat – Top Quality Painting Proudly Painting Brevard County Professional Painters You Can Trust! Residential and Commercial Painting Top Coat offers a wide range of painting services including interior and exterior painting, deck staining, drywall and plaster repair, wall paper and popcorn ceiling removal, pressure washing and wall prep. You get top quality work at an affordable price. We start projects on time and finish on time. Top Coat is your Top Choice For all your painting needs Experienced, professional, uniformed painters. Laser measurement for accurate quotes. Licensed, bonded, and insured. Discounts for active military, veterans, and first responders.  …

Painting exterior & interior Pressure Washing-house,pool deck,roof,fence.. Concrete stains We are a small family owned and ran business. Quality and timely project completion is our goal. Darrin has 15 years experience with two different companies painting residential and commercial buildings.. We are a new business looking for friendly new customers! We guarantee your satisfaction, and we won't leave until the job is done right. We pride ourselves on the quality work we provide, while delivering great customer service! Call or click for your FREE estimate today!  …

Total Home Enterprises is currently rated 1.8 overall out of 5.

No, Total Home Enterprises does not offer eco-friendly accreditations.