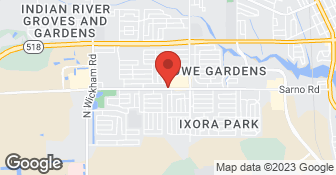 Bugs don't stand a chance with Orange Pest Control. Best pest control and termite protection services in Melbourne, FL and Brevard County. Providing proven effective treatments that are safe for your family and pets. We guarantee to take care of your bug problem or your money back....

Avoid this company like the plague! I used Orange Pest Control for 3 years. My yard became infested with crab grass, sedge, broad leaf weeds, and many other weeds. When I first contacted them about my concern, Jonathan Robertson, one of the owners, came out to look at my yard. He stated that there was nothing they could do about the crab grass. However, crab grass is a weed. Upon further research on it, I discovered that there were definitely things that should have been being done to treat and prevent the crab grass from taking over my yard. Therefore, I contacted Orange Pest Control again. When I called and spoke to Brooke and told her I wanted Jonathan to come back out to my property, she stated that Jonathan schedules his own appointments and she would let him know to contact me. Over a week passed and Jonathan still had not contacted me. Therefore, I called Orange Pest Control a second time. I again spoke with Brooke, shared with her that I had not yet heard from Jonathan and it had been over a week, and that I still needed him to come out to my property to look at my yard. She reiterated that he schedules his own appointments but that she would relay the message to Jonathan again. Two more days passed and still no word from Jonathan. So I called Orange Pest Control for the third time and relayed the same message to Brooke. Marcus ended up calling me a short while later, not Jonathan, and he scheduled to come out to my property four days later. I met with Marcus, showed him my yard, pointed out all of the infestation of crabgrass, sedge, etc. throughout my entire lawn, told him how completely unacceptable my yard looked considering it was being serviced by them, and reminded him of what their website states regarding weed control and 100% guaranteed. He asked what I wanted them to do to fix the problem. I told him that because my yard was completely infested with crab grass, sedge, etc., the only option I could see to fix my yard was to get new sod put down. Marcus informed me that he did not have the ability to make that kind of decision, but that he would go back, speak to Jonathan, and let him know. It has now been 4 weeks since my meeting with Marcus and I have not heard a word back from anyone at Orange Pest Control. This company’s website states, “Our values define our company and every job we do- humility, excellence, and responsive communication,” as well as, "Weed control to eliminate unsightly growth and prevent new ones from popping up" and "Your Dream Lawn 100% Guaranteed." This company has completely fallen short on all of their advertising promises! Add to that Jonathan’s lack of professionalism and work ethic, this is a company to stay clear of!

Locally owned and operated. With 15 years experience in the Pest Control. We treat for termites, roaches, spiders, ants, fleas, ticks, bees, and wasps. We also provide lawn fertilization, and weed control as well.  …

Orange Pest Control is currently rated 1 overall out of 5.

No, Orange Pest Control does not offer eco-friendly accreditations.