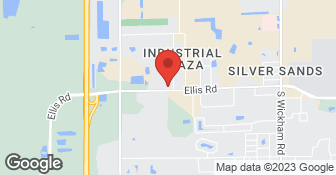 Call A Greayter Hand and remember “If it’s not exceptional it’s Unacceptable!”  …

Property Renovations & Construction is a Licensed and Insured Roofing, Windows and Doors Contractor . We pride ourselves on our Quality of work, Customer Satisfaction, and our Business Integrity. We specialize in exterior renovations including, Residential and Commercial Roofing, impact Windows and Doors. We are experts in saving Home & Business Owners thousands of dollars every day by renovating their assets with energy efficient and storm protection products.  …

The work went very well, I've used them before, and everything was very good, very responsive and professional. They arrived on time as scheduled.

This is the third time working with them. I cant praise them enough. Great all the way through

Description of Work
Put enclosure up

About 5 years ago we had our porch enclosed, we chose Malabar Products and they did a very good job. I am very disappointed and frankly shocked with our recent experience. After 2 years in a row of hurricane preparations we decided to get hurricane protection for the porch. The first people we called and the people we thought would do the job was Malaber Products. Toby came to the house took measurements and stated he would email us the estimate the end of the following week. It's been over 4 weeks and 5 unreturned phone calls. I am totally surprised by this. I thought they were a company with enough integrity to at least tell us they don't want the job. I saw on another sites reviews that this happened to someone else.

We closed off our back porch under existing roof to create another room in the house, under air. Their planner came out to see the area and made some helpful suggestions. Then Marty, the planner, came up with plan and price later that week. The job required a concrete contractor to build a knee wall and he was excellent! Then Marty returned for final measurements to order window and door units which were expertly installed several weeks later. Tom, owner of Malabar Products made sure all details were correct and the project was all done to code with a proper building permit. This not only very useful extra space it has added value to our home.

My experience was very negative. My husband and I had an aluminum porch put on the backyard in 2000. We had another one put on in 2011. There were some sort of manufacturing defect when the aluminum coating didn't stay on it. I have six months to try to get someone to do something about it. Definitely, not anybody I would do business with again. I'm calling to complain that my whole front porch, 12 feet out and 48 feet long, it's the focal point of my property. It's supposed to be aluminum and it's supposed to be bronzed colored. Now it' all silver because the bronze aluminum powder coating didn't stick in the process. Its just literally flaking off. I called them to look at it. They told me they're not the ones who supplied the product so I would have to get a hold of their supplier. Four months later, she gets a hold of me. I said, you weren't smart enough to call Malabar products to get my phone number, you waited four months. She does a complete walk around. She doesn't see any reason why this should be happening other than manufacturer defect. She tells me she would get back to me and let me know. There's a possibility they might cut a piece of my aluminum frame off and send it to the company that they got it from to see if there's anything they can do for us since it looks like its a manufacturer's defect. That was three months ago and I still haven't heard from anybody. There's no way I'm letting them cut off a piece of y aluminum frame that's holding up a roof and the screen porch to find out anything. I called the guy at Malabar product, he had the nerve to say to me, we're only a two-man operation and we have a bunch of new customers. I said, if I had known that you were a two-man operation when I did business with you, I wouldn't have done so, one. Number two, maybe your new clients would like to know how well you treat your old clients. Their price is very reasonable. We went with them on the second porch out of loyalty and the fact that we have priced around and they were in the middle of the road. If I had just gotten the product that I wanted that looked like the back porch, I'd be a happy camper right now. I had come to find out, they're just a two-man operation. They get their product from somebody else who gets their products from somebody else. When you're trying to hold them to test for the material defect, you're like trying to chase a ghost. I called to get somebody out here in November. He came out, used this nail to scrape off a large section of it. I didn't see anybody again until February or March time frame. That was that lady who told me she lost my phone number. They came out and they were very polite. I will never use them again.

Description of Work
My husband and I had an aluminum porch.

Great work. Crew was very professional and did an excellent job. Very impressed with the cleanup. Room was spotless when they finished. Will gladly recommend them.

Everyone I spoke with or had dealings with at Malabar Products was friendly and helpful. They also were prompt at returning my calls and notifying me of install dates, delivery dates and the like. Fred, the actual installer did an incredible job. His work is neat, and the porch looks great, He did details I never knew were involved in screening. I had the "Pet Screen" put in as I have 2 Labs. It really does work well because one of the Labs attempted to hurl himself through it to get to a squirrel and the dog bounced off the screen! It also keeps the room much cooler because it reflects the UV rays, it also has much greater privacy. Fantastic job on the front door too. Fred is a very neat and keep the job site clean and removes all of his mess. I would recommend Malabar Products to anyone.

Great! I was impressed with all hard work and the overall job.

Description of Work
They enclosed my front door with a screen and security door.