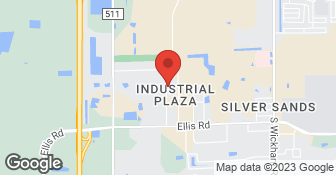 Anderson Brothers, Inc is a family owned and operated business. We are a second generation Florida home improvement contractor....

After 30 successful years in the construction industry we have realized the importance of energy conservation and efficiency. We specialize in windows, doors, siding and exterior painting. Our staff is fully trained, licensed and certified. Allow your family to be serviced by our family.  …

A to Z GC - Home Improvement

ENERGY AND HOME IMPROVEMENT What started out as a small engineering practice has transformed into a trusted brand in both the solar power and HVAC industries, as well as an expansion into the roofing, windows, and door niches. A to Z GC is a team of skilled professionals that aspire to make both the process of “going solar” and building hurricane proof homes an achievable option for everyone. Based in Southern Florida, we understand how important it is to our clients to be energy efficient and feel safe within their homes.  …

We offer the highest quality Hurricane Shutters available along with professional service all at a very reasonable price. Just ask your neighbors! We take pride in our "A+" rating with the Better Business Bureau and we are a member of the Titusville Area Chamber Of Commerce. All installations are performed by our employees, NO subcontractors. We offer Galvanized, Aluminum and Clear Panel Systems, Accordion Shutter Systems, Roll-Up Shutters, Bahamas, Colonials and Hurricane Netting Systems. We also offer maintenance and service of your existing shutters. Schedule a Free In-Home Estimate- We travel to you with samples of all products and a respect of your time. We guide you through all the options and find the best solution for your needs.  …

one month before storm, lost shingles and had major leaks sent 3 e-mails and called was told twice he was coming out that day no show no call backs no nothing there are even nail heads showing also shingles not below drip edge I told them during install the type vent ridge would leak I was told it was new and improved and was promised it would not leak well it did a lot. I would stay away from the...

Description of Work
Had a new roof put on

Never fixed the leak, blew off phone calls, once the check cleared for the roof they were unavailable and unreachable. UNPROFESSIONAL

Had Mike work on roof to stop leak back in October of 2016.The leak is still not fixed after several attempts to fix it.Now they keep saying that they are going to come out and fix it or refund my money back.But now I keep getting blown off and ignored.I don't believe they intend to honor their commitment and do the job I paid them for.

Description of Work
I hired Glass Guru to replace windows in our townhome.We just happen to have a hurricane hit right before they did the job.Dale said Mike with Anderson brothers who is run by Dale's brother;could fix a leak in our roof.Dale and Mike said they would do it for $1250.00 cash.We are happy so far with windows.Still waiting on minor repairs

Description of Work
They replaced all my windows with impact windows.

We were contacted by Jackie today with an update, we will let you know how it goes.

Description of Work
We're still waiting for front doors that we ordered almost 3 months ago! We really liked Dale who came out for the estimate, the price was right and they were the only company that had the doors we liked. However, we were told that the doors would be in 1-3 weeks from order and then no contact when that didn't happen. We have had to initiate the status calls and it feels like we're being avoided. At this point we am not confident about the company that now calls themselves The Glass Guru. We expect a prompt, definite installation appointment, proof of all insurance and warranties as well as proper permits to regain our trust. If not, we will be forced to take legal action.

The door did take longer than expected. We have since installed it and they appear to be happy with everything now.
1.0

Unlike others who have recommended the window installation work of Anderson Brothers, Inc., we were very dissatisfied with their services. We received our bid ($6,265) on 1/2/14 to replace eight windows with Softlite Double-Hung Impact Glass windows. While not a bargain, we accepted the bid as offered because it was in line with others we?d received and Dale (the owner and bidder) was personable and seemed professional. The company?s professionalism ended there. We paid our $2,000 deposit on 2/12/14 and were told the windows should arrive from the manufacturer in approximately three weeks. After four weeks had elapsed, we called to ask what was going on. We were told the manufacturer was ?backed up? and Anderson couldn?t predict when our windows would arrive. We found that reply odd: a company that deals with a limited number of manufacturers should know its business well enough to give its customers accurate information. Instead of three weeks, the windows arrived in five. The windows were installed, as promised, in one day (3/21/14). We were unhappy with several less-than-professional actions by the installers that day. Without asking, they posted two advertising signs in our yard by driving stakes into the ground, which could easily have damaged sprinkler system pipes. The signs advertised Window Guru, leading us to believe the work had been subcontracted to another company. The signs were left in our yard at day?s end. One of the workmen inattentively walked through a closed screen door, ripping out the screen. It was re-screened but with an annoying sag and was later repaired properly, on a subsequent visit. Two window sills were deeply gouged, then inadequately caulked. The worst mistake, however, occurred in our main bathroom: instead of the window we ordered, with completely frosted glass, the one installed was frosted on the upper half while the bottom half (looking into the shower) was clear. The mistake was blamed on the manufacturer and we were told a replacement would take, you guessed it, approximately three weeks. Really? The manufacturer?s mistake and it would take them three weeks to rectify it? No concern on the part of Anderson Brothers (who had been paid in full) to demand a faster replacement? No concern that my wife and any guests would be showering in a fish bowl? But wait! It turned out that the replacement window was ready in NINE WEEKS. During that time, we received no phone calls of explanation or apology. Our inquiries were answered with terse vagueness and seeming unconcern. Very unprofessional! During this interim, we arranged to have a workman return to re-caulk the window sill gouges. The appointment was set for 9:00 A.M. on a Friday. My wife arranged her schedule to be home at that time. The workman called at 11:00 A.M. to report he was ?running late.? He called two hours late then told her he would arrive at 1:00 P.M., six hours after the original appointment. His actual arrival time? 3:00 P.M., EIGHT HOURS LATE! My wife?s entire day having been wasted, she called and spoke to Dale Anderson and requested compensation of $100. He basically laughed in her face. But the lack of professionalism didn?t end there. The replacement window was installed on 6/3/14. It was fully frosted, but IT DIDN?T FIT! That?s right, it was a half-inch too small, meaning it couldn?t be locked. The second replacement window? Right again, ready in three weeks! It was installed on June 27, 2014, completing an eight window installation that was begun three and a half months earlier. The final installer told my wife, ?Don?t take it personally, but I hope I never see you again.? He needn?t have worried; no one from Anderson Windows/Window Guru will ever see us, as customers, again!

They were very efficient and I don't think it took them much time to put them in. They are very nice windows and when they put in the screens I was really satisfied and had no problems at all.

Description of Work
I used Anderson Brothers Inc to do my windows when I first moved into my house in 1998.

They were great and absolutely perfect. They did a good job, they cleaned up their mess and we don't have problems with the windows. Their service was excellent and prompt.

Description of Work
They installed our windows and doors.

Windows and doors were as advertised.. very impressed with overall quality

Description of Work
Supplied hurricanne impact windows for a remodel