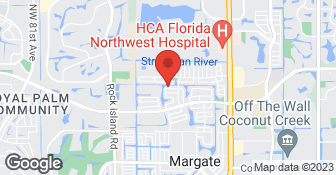 Air Rescue is a full service residential air conditioning & heating company. We are a family owned and operated company with over 30 years of experience servicing and installing air conditioning systems. We offer a level of service that you just can't find in corporate HVAC companies. The extreme heat of South Florida demands that your A/C system receives an annual check up and service for proper cooling. Our qualified, professional HVAC technicians will perform a complete evaluation of your air conditioning system, identify problems, and give a detailed honest estimate before starting any air conditioning and heating repair services. We will make sure your system is working at peak performance which will continually save you money on your cooling and heating bills month after month. We can often offer same-day service, so give us a call today!...

Perfect! I called the office - Denise, the Office Manager, was friendly and understood the need for urgency. She called back within 10 minutes and advised that Carlos would be over within an hour. And he was! Carlos always shows up with a smile and goes right to work. It turned out that while I was out shopping there was a power surge during the storm. Carlos fixed the breaker and said he was going to replace it with a stronger one so that this would not happen again. He's the best!

A/c was not cooling.Called Air Rescue .Carlos came right away. Fixed unit quickly. Changed out compressor motor and fan. He is very professional and prompt. Does great work. He will stay with job until it’s completed no matter how complex. Will use him again if A/c has problems in future.

Thank you for the wonderful review. Carlos takes great pride in his work and stands behind it. Reviews helps us to stay on track with our customer service and greatly appreciate your time in writing this!
1.0

Stay away from this company. Carlos was hired to check my AC which was not cooling. He supposedly added Frion to it, but he never even opened the equipment to see what was wrong. He charged $350 dollars cash after 5 minutes, claiming he would send the receipt via email, he didn't even stay to see if it was actually starting to cool down. i called him in the afternoon that same day, saying that the AC was in the same condition that when he came, and he stated that i had to wait 24 hours for it to cool down, which is a false statement since the equipment should have started to cool down little by little. We called him on Sunday and he came with a bad attitude, always saying that our AC was out of warranty (he insisted on that since the first day) He left saying he d try to get the parts from the warranty and he never showed up again. It was a completely rip off. Please stay away.

Description of Work
HE WAS HIRED TO FIX THE AC.

Your father told us it was a tiny leak because he had it filled previously. Upon receiving that information we added freon and a leak sealer. The temperature in the house was close to 85 degrees, and you were told it would take 24 hours to remove all the heat since the unit was down for several days. Then we received a second call that the unit was not cooling, Carlos went back again and checked the unit and it was out of freon again. He checked the condensation line and found oily residue coming from the line, upon that find he told the owner it was the evaporator coil leaking and it wasn't a tiny hole as I was told. Any experienced technician does not need to remove the door when oil is already being found coming out of the condensation line. The unit is registered in your name and the house is registered in your fathers name. Anytime we go to replace a Rheem part at Gemaire in Pompano Beach the registration must match the county records. Please keep in mind this was a Sunday call which is normally a $200.00 emergency service call. I'm sorry you felt I had a bad attitude, I was in the kitchen with your mother and father and were laughing and joking. I even accidentally took his phone and brought right back and we laughed about it. Good luck to you.
5.0

Carlos was wonderful in every step of the installation of the new unit. He was prompt, very professional and I would not hesitate to recommend him to anyone. It was a pleasure doing business with him.

Thank you so much for the wonderful review! Enjoy your new ac unit !
5.0

Mr. Garcia is a consummate professional. The air conditioner that he installed in my home is the finest unit in the 32 years of me living in this home. The workmanship is first rate it is truly a work of art. From the signing of the contract to the pulling of permits Mr. Garcia delivers what he contracts at the price he quotes and I would not hesitate to use Air Rescue again. It’s a pleasure to work with people that care.

Thank you so much for this amazing review. We appreciate you taking the time to write this. We always stand behind our work!
5.0

They came out on 8-29-18 and then Friday we had a new A/c unit. They worked their magic since my father was ill.

Description of Work
Whole a/c needed to be repalce

I'm glad we could make your father comfortable, we try to move swiftly since the temperatures in South Florida can be brutal. Thank you for your review !
5.0

Carlos did a fantastic job! He is very knowledgeable, prompt, honest, reliable and exceptionally fair on price. I will use Air Rescue from here on out. I wouldn't trust anyone but him at this point.

We appreciate your time in giving us this fantastic review!
5.0

They responded right away to my message on Angie's list even though it was 8 pm. Carlos came the next day; identified the problem and explained it to me. Fixed it. Fast, friendly and efficient.

Thank you so much for your time in giving us this review. It helps us to stay on track in our continuing efforts to service our customers.
5.0

On 3/21 I wrote a review and gave a rating of “f”. As I stated Carlos from Air Rescue Had been out to my house 10 times and was due for the 11th the very next day. The system that had been installed was giving us problems from inception it was a major major headache. I’m now changing my rating to an overall “a”. Only 11th trip Carlos got on the phone with the Trane manufacture’s representative put me on the phone as well and Carlos was adamant the Trane send a rep out to the house. That actually happened within an hour. I’m pleased to say that we are now one week post repair and this AC is working like the way I had hoped it would 11 months ago. If you want someone who stands behind their work and I mean really stands behind their work Carlos and Air Rescue is the company for you to go with. He stuck with it till it was right, at no extra cost to me.

Wow ! Thank you so much for the time and effort to write this review and detail all the events that transpired. Even though we don't build the equipment we still stand behind our work with great pride.
5.0

We couldn’g be happier with the service. Carlos and his team were fast, knowledgeable, and pleasant to work with. The price was very competitive, and the work was done on time with no glitches. I would recommend them without reservation.

Description of Work
We had our electrical service panel replaced, and a new AC system installed

Thank you Mr. [Member Name Removed] for taking the time to give us this wonderful review. We value you as a customer, if we can do anything please give our office a call.

How is Air Rescue Cooling and Heating Inc overall rated?

Air Rescue Cooling and Heating Inc is currently rated 4.8 overall out of 5.

What days are Air Rescue Cooling and Heating Inc open?

No, Air Rescue Cooling and Heating Inc does not offer eco-friendly accreditations.

Are warranties offered by Air Rescue Cooling and Heating Inc?

What services does Air Rescue Cooling and Heating Inc offer?

Are there any services Air Rescue Cooling and Heating Inc does not offer?