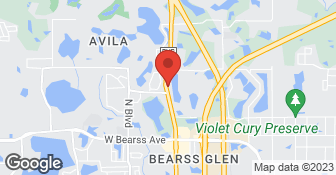 BEWARE DO NOT WASTE YOUR MONEY ON MORGAN EXTERIORS! PAID IN FULL AND THEY WILL NOT FINISH THE WORK. THOUSANDS IN DAMAGE TO MY HOME. LOOK AT MY PICTURES THIS COMPANY IS HORRID FROM TOP TO BOTTOM BE WARNED!

Description of Work
Siding and paint

Company policy is apparently that both husband and wife be present for an estimate to be given. Waste of my time, as no decision would have been made in any fashion today. Sounds like high pressure sales.

We apologize for any upset. We follow the recommendations of every best business practice to ensure you get the best service possible . This includes making sure all parties involved are fully aware of our products styles, colors and options. Many of which can affect the prices of our products and the timeline in which the product will be received. In order to save your time and ours we simply ask for you both and 60-90 minutes. Our estimate provides you and your spouse with an education and knowledge on the products that we provide. We believe in that smart consumers are educated consumers. Once again we apologize that you feel we deserve a 1 star for providing a 5 star service .
5.0

Curtis came to our house and was very professional and gave an inclusive and informative presentation and competitive quote for our kitchen remodel. I can tell Morgan exteriors uses quality products and I am very excited to see what the end result will be.

Max gave us a professional tour of our options, the process, the timing and the cost. We know quality is what Morgan Exteriors/Bath Planet is known for and it’s true! That’s why we hired them a second time. First for a shower remodel and second for a tub/shower remodel.

What a chauvinistic company!!! I was refused a quote on a whole home for windows because my husband was not going to be present for the quote!!! ***!!! I've been in construction for over 25 years and my father specialized in windows and sliding glass doors for over 40 years. I know exactly what I want and what I want to pay, and under no circumstances should my husband need to be present for the quote when he trusts me completely to make this decision! This is definitely discriminatory towards women!!! What a horrible business practice! Never use this company!!!

Description of Work
Quote on 18 windows

We apologize for any upset. We follow the recommendations of every best business practice to ensure you get the best service possible . This includes making sure all parties involved are fully aware of our products styles, colors and options. Many of which can affect the prices of our products. In order to save your time and ours we simply ask for you both and 60-90 minutes. Our estimate provides you and your spouse with an education and knowledge on the products that we provide. We believe in that smart consumers are educated consumers. Once again we apologize that you feel we deserve a 1 star for providing you an excellent service .
1.0

The sales rep and the presentation at first was fine but it changed rather quickly. The sales rep had a new hire with him and instead of letting the new hire engage he actually talked down to him. Also the sales rep put down his own company from time to time. For example “Yeah, I can’t reach anyone they all must be playing golf.” “Yup, Mr. Morgan is too busy to answer, probably it concerned over how much money he’s making.” At the end of the sales pitch my husband and I were honest and said we need to talk it over and compare other companies. The sales rep instead acknowledging that kept pushing for us to sign the contract. In fact the sales rep went as far lowering the original price to almost half if we signed and did unpaid free advertising. I have never had a sales rep continue to push to the point were it became negative. His voice was getting louder at the same time. At the end he turned to his new hire and said some where on the lines of “These people aren’t serious, this happens sometimes.” We are very serious about new windows and want to make sure we are getting the best quality for our money. We also will not jump to spend a few grand because a window purchase can be the same amount as buying a car. My husband and I wanted to weigh all of our options prior to moving forwards. We will not be moving forwards with Morgan Exteriors. I understand making a sale is important but it is ok to let a potential client think it over.

Before the replacement began I received another quote from Pasco W &D. They brought to my attention that a casement window could be installed avoiding egressso I can enclose my linea. A question I asked morgan, both Jeff and Dennis said there was no way to get around This. I was misinformed and mislead. The cheaper quote I received from Pasco W&D with the casement window would not be honored Because of PascoW&D’s reputation. I question morgan exteriors’ Ethics and business practices. They would even give me Kirk Morgan’s email.

The windows are fine but I priced a bit high. The instillation crew consisted of two men, the older one being the boss who constantly berated the younger man for not working faster, the crew should have had at least three men to do the job safely due to the weight of the larger windows. As they prepared to leave we had to remind them to finish chalking one of the windows and I wanted a new screen to replace one that was made too big and forced into place, I also asked them to wash the windows as promised, they said the next crew would finish, cleanup, install the new screen and wash the windows, after they were gone I found moulding that had been poorly installed. The cleanup crew brought a correctly sized screen and tried to correct moulding issue which I actually had to finish myself, they also informed me that washing the windows was not their job and should have been done by the instillation crew so we of course did that too. I had to repeatedly call Morgan to find out when the cleanup crew would arrive and the new screen would be installed. If I hire Morgan again I will withhold at least half the payment as long as I have to until I have had time to make sure the job is completely satisfactory, I should have known better, that was my fault.

Very nice job& after installation I noted. $40 difference in my power bill, so win/win!

We replaced all 15 of our windows with hurricane impact windows. Morgan Exteriors matched a lower quote from another company, and they have a 1 year price guarantee. We were also impressed by their 100% lifetime guarantee on everything, no small print of exceptions. They came out and made sure everything was exactly as we wanted it before submitting the order. The installation was fast, and the workers kept the site very clean and safe. Eta was our first storm since replacing the windows. I kid you not, I slept through it. The windows are so insulated that I didn't hear the rain or the wind, and I slept with peace of mind knowing that the kids were safe from flying glass. Great job guys! We'll call you when it's time to do the doors!

Morgan Exteriors Inc is currently rated 4.4 overall out of 5.

No, Morgan Exteriors Inc does not offer eco-friendly accreditations.

No, Morgan Exteriors Inc does not offer a senior discount.

Are there any services Morgan Exteriors Inc does not offer?