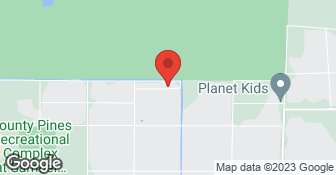 Davies Caulking and Waterproofing, Inc. has been established for over 20 years and has accumulated over 50 years of work experience in the Caulking and Waterproofing trade. We are certified by the major caulking and waterproofing product manufactures to apply their products. Maintaining a high level of workmanship by training all employees and having close supervision has allowed us to serve the residents of Central and South Florida proudly for over 20 years. Currently our service area is limited to North Broward, Palm Beach, St. Lucie and Martin Counties. We apologize in advance for any inconvenience. Thank you!...

Description of Work
Wanted a caulking estimate for exterior windows and doors. Made appointment on Wednesday for estimate late Thurs morning (next day). When he was not there 20-30 minutes late - I called. He had no idea who I was or when appt was scheduled. After fumbling through files, he confirmed that he had forgotten appointment. I should have known then, but wanted to give benefit of doubt. We rescheduled for the next Monday at 3. I asked him to confirm Monday morning that he was coming, and to call 30 minutes prior so I could meet him (he did confirm Monday morning). At 3:15 I called, and he said he was still going to appt prior to mine. He went on to tell me he could not be exact because he had 12 appts, etc., with some level of attitude. I am happy he is busy, but needless to say, we will not be doing business with this company - they are too busy...

They did a very good job. No complaints. I would use them again and recommend them to others.

Description of Work
They waterproofed 2 different homes for me.

I met with the owner, Bill Davies at my home and showed him the issues. After signing the work authorization on November 17th and being told it would be about 10 days before he could get to it, nothing has happened. It is now 30 days since the work was authorized and he has never shown up to do the work, in spite of several promises. The latest was supposed to be the end of this past week, but it came and went without so much as a phone call. He has cited "a little rain here and there" as one reason, but there has been no rain at my location. He talks as if he is the man to solve the problem and could be the best waterproofer on earth, but it offers me nothing if he never shows up. He was never pro-active about keeping me informed. I was always calling him. I've basically wasted an entire month. Sad.

Bill is the best. He sealed my house last year after I had some water issues and I have not had any problems since. He and his team are thorough, dedicated and professional. After have my roof cleaned, I had a leak around the flashing on the vent for the bathroom. Bill took care of the problem in a timely manner. He always makes sure the job is done right.

When he was at the job site, we informed him that we needed to get it done quickly, because we were reselling the house. Today is the 15th and we still haven't heard back. So, we don't know about his prices or work quality, but I do know that we are not going to chase someone down to give them money.

Description of Work
Called about a wall leak in a house we just bought for resale. He came out, spent about an hour, we talked about what need to be done, told us he be fair with the price, and left.

Bill and his team did a great job. I would definitely use Davies caulking and water proofing again.

He called me explaining his issues but never got back to me with a quote. Nice guy just never heard back from him. Hope he is ok.

Description of Work
He came to give me an estimate but never got it since he had some personal issues.

They were really good. They did a great job. I didn’t really have any dislikes. It worked out really well. They took two days. I haven't had any issues at all. It's all been good.

They were very professional on the phone and explained that to fix it properly would require resetting the track on a new sealant bed which is not work they do. They also gave me some good recommendations on how to test the leak and fix the problem. I found them to be very helpful even when they weren't going to be able to do the work. I would highly recommend them ot others.

Description of Work
I called to get an estimate for fixing a leak on a sliding door.

Bill and his son PJ were very helpful with their expertise and polite. We were pleased with the crew as well. Would definitely recommend.

They did a good job caulking around the foundation of the house which was their recommendation at the time.

Description of Work
Caulked the entire foundation of the house.

I fantastic. i have never met PJ - via text and via phone only. They came out last year dropped of an estimate. Then, they came and did the job - I was not home. I left them touch up paint - due to my error the paint was old and did not match the house color. I went and bought new paint. They came back on their own and redid the touchup. the caulking was excellent - has been about a year and it looks good

Description of Work
Caulked all the windows around the house. Large house >4500 sq ft

Did excellent work. Very thorough and professional. Definitely would recommend this vendor.

Description of Work
Waterproofed all windows.

They were on time. They did a great job.

Description of Work
Caulked all cracks around house and windows

[member name removed], Thank you for the great review. We appreciate it. If you have any problems please contact us and we will take care of it for you.
5.0

Description of Work
They waterproofed windows and concrete foundation.

Nothing to add to above.

Description of Work
Checked entire outside of house. Pointed out issues not related to caulking and indicated that doing any work was expensive and probably would not solve our problem with white footed ants. All this was done promptly, professionally and at NO COST.

I would give them 'F' all the way down the pipe.

Description of Work
I had a horrible experience with 'Davies Caulking & Waterproofing'. They never came back, they started the project and never came back and I want to write a review for them because their operation disturbed me. I had some water leakage that was coming into my garage and they started trenching along the wall that was leaking and then never returned. They have not answered phone calls nor have they answered text messages. They charged me nothing, they started but they never billed me in fact they have left two shovels and never came back to get them.

Great - came when he said he would. did a very good job.

Description of Work
waterproofed my foundation and caulked the windows.

We greatly appreciate you choosing to work with us. If you have any problems in the future we hope that you will contact us again.
5.0

This is a very professional company. They did excellent work . They are very honest people. I recommend them with no hesitation.

Description of Work
waterproofing of foundation and windows

Thank you for the great review. You were a pleasure to work with. If any other problems occur, we hope to hear from you.

Coating Max, with more than 10 years of experience in the construction industry, brings class and beauty to your floors. With state of the art equipment and certified professionals, you can rest assured that our work is of the highest quality. You will be more than pleased with the final results. We specialize in commercial and residential Concrete Floor Polishing | Decorative Concrete | Epoxy Floor Coating | Epoxy Metallic Artistic Coating.  …

Green Village Services Corp is a residential and commercial painting company that serves the South of Florida area. Our experienced crew, performance history, great service, and fair pricing has been the key to our success.  …

Proud winner of the Angie's List Super Service Award for 4 years in a row, from 2016-2019. Prisma Painting Services is family owned company that specializes in high quality painting. We have over 20 years of experience and thousands of satisfied customers in the Palm Beach and Broward Counties. We are fully licensed and insured and look forward to providing our excellent service and exemplary results as expediently as possible. Seniors and military veterans receive 5% savings on any estimate; please let us know at time of scheduling!  …

Bonded
Insured
All statements concerning insurance, licenses, and bonds are informational only, and are self-reported. Since insurance, licenses and bonds can expire and can be cancelled, homeowners should always check such information for themselves.To find more licensing information for your state, visit our Find Licensing Requirements page.
General Information
Free Estimates
Yes
Eco-Friendly Accreditations
No
Payment Options
Check
Senior Discount
No
Emergency Service
Yes
Warranties
No

Davies Caulking & Waterproofing is currently rated 4.6 overall out of 5.

No, Davies Caulking & Waterproofing does not offer eco-friendly accreditations.

No, Davies Caulking & Waterproofing does not offer a senior discount.

No, Davies Caulking & Waterproofing does not offer warranties.

Are there any services Davies Caulking & Waterproofing does not offer?