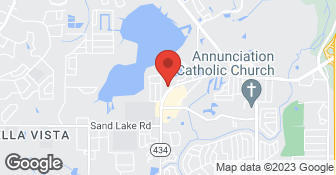 We complete exterior work only (No need to enter home)
We will wear masks and gloves when we visit your home
We accept remote payment
All statements concerning COVID‑19 business operations and essential services are informational only, and are self‑reported and not verified by Angi.

We specialize in re-roofing residential homes with asphalt shingles, metal, tile or TPO membrane in the central Florida area. We are a family and veteran owned business that has been in the construction business for 30 years in central Florida. We have installed hundred of roofs over the past 15 years. We offer exceptional quality and workmanship at a fair price. Liberty Roofing of Central Florida have quality trained staff and has all the proper insurances and licenses including workers compensation....

Everything went very well. The crew worked tirelessly, did a great job & cleaned up thoroughly. We love our new roof, everyone, especially Tom , the owner was so courteous & helpful & we would highly recommend Liberty Roofing.

I have a list of grievances with Liberty Roofing. I had a tiny leak a few months back on my roof. When I called them to perform a repair, they came over promptly, assessed the roof and told me "you need a new roof". I made it clear that I was in the process of saving for a new roof and that I understood it was old, but I just need it repaired. A proverbial "band aid". I was informed by the team (the owners I believe) that the only realistic half-measure would be fixing the entire flat portion of the roof. This was still a far cry from a band aid. So, with that said, I told them I couldn't afford that right now and I asked "what could we do to buy me some time while I considered it?" They offered to send a tarp guy over and I agreed that was a good solution. I was charged approx 350. Fast forward 2 months and I called two much larger roofing companies for a second opinion. They both came back with identical assessments - that Liberty's diagnosis was incorrect, excessive and a much smaller job could solve the issue while I waited for my new roof. I did NOT need to replace the entirety of the flat portion of my roof as the ONLY quality fix for a small leak. It was pointed out to me by two different people that is was a simple shingle issue. Liberty tried rolling the dice with me on an apocalypse scenario. The funnier thing is it took Liberty 3 min to come up with this scenario and it took the other roofers 30 min to get to the bottom of it - correctly. Now for the fun part - see photo below. Liberty's tarp guy just decided it would be ok to step all over my copper solar pool cells. Huge bootmarks just crushing them. Which finally explained why my solar had stopped working this year. I don't have proof it was Liberty, but considering the were the only ones on my roof and the boot marks literally span the width of where the tarp was installed, I'm not sure who else this could have been. When the new roofer got up there, he pointed it out instantly. Both new roofers that I called for a second opinion pointed out the excessiveness and insanity of the tarp job as well. Quoting me hundreds to undo the damage. I reached out to Liberty and explained this in detail to their receptionist who told me the message was passed on to the owner, but I have yet to hear anything back. Not an apology, not an attempt to defend their work, nothing - so they heard from a very mad and unsatisfied customer and their response was to ghost that customer. I don't love leaving negative reviews. I like giving people an opportunity to correct things or address them, but they don't seem interested. It's important that potential customers know to beware of their tactics and to keep an eye on the negligent person they sent out to do their work.

They did a fantastic job. My wife and I are very happy with the color of the roof and the work they did. They were very accommodating with a color change of the drip edge. Bob was great at communication through the whole process and Tom saw everything through. I wanted to give a shout out to their roof lead (Sancho?). He was on top of everything and even stayed late to clean our driveway and pickup any leftover nails while everyone else was gone. They offer great prices and use peal in stick! I will be recommending Library Roofing CFL to everyone I know.

It was a pleasure working with you on this project. Thank you for your business.
5.0

Thomas was great to work with. Experienced and very responsive. Their pricing was one of the best I'd received but I was most impressed with Thomas's experience and how he keep me informed every step of the way. I never had to call them, they always called me. Very diligent and professional experience with Liberty Roofing. I recommend.

It was fantastic. I have no problems on any issues, they were quick to response, very clean work site and they were very professional and I have some schedule for them for some work in the future.

Description of Work
They replaced a roof on one of our facilities.

Liberty roofing was knowledgeable, fairly priced, and very professional throughout the project.

It was excellent and I would recommend him. He got back to me every time I left a message, the process was very quick and he was very educational on the process and the work was exceptional.

Description of Work
He did an installation of a whole roof.

Description of Work
Perfectly. Tom and his crew were fast and professional and the job was completed on time. They did an excellent job. The price was also better than all of the other quotes I received.

Excellent. 5 star review for these folks; complete, fast, and attention to detail. Definitely recommend Liberty Roofing of Central Florida for all roofing needs.

Description of Work
roof repair due to wind damage.

How is Liberty Roofing of Central Florida overall rated?

Liberty Roofing of Central Florida is currently rated 4.8 overall out of 5.

What days are Liberty Roofing of Central Florida open?

What payment options does Liberty Roofing of Central Florida provide

No, Liberty Roofing of Central Florida does not offer eco-friendly accreditations.

Does Liberty Roofing of Central Florida offer a senior discount?

Are warranties offered by Liberty Roofing of Central Florida?

What services does Liberty Roofing of Central Florida offer?