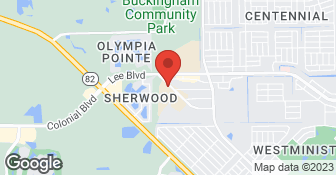 Aqua Care Water Treatment & Plumbing has been serving the SW Florida area since 1990. Our plumbers have many years’ experience in the industry and we promote products that are manufactured in the United States....

Description of Work
Acqua Care installed our water softening system when we purchased in 2005. They service it semiannually for maintenance. They also replumbed our entire house, installed a reverse osmosis system and service the salt. They are professional, reasonable, and one of the most reliable providers we have for our vacation home. So many people get taken down there because they don't live there year round. I would recommend them to anyone. Thanks, Larry and staff!

.They were here about an hour snaking the pipe to unclog my sink. I have old pipes and the grease builds up. they used the heavy duty snake and got the job done, also recommended a treatment to keep the grease from building up.

Description of Work
unclogged my kitchen sink...it was a serious clog

Seemed to take hours to get here, but it was done. We had no water through the hours of wait

Description of Work
Bought a water system tank at Ace Hardware and replace our busted one.

Thank you for your review but we did not perform this work for you. We do not have you in our customer data base and were not at that address. We stock several pressure tanks on each truck which we feel are of a higher quality than those available at home improvement retail stores. Please check the name on your invoice. If you feel this is incorrect please feel free to call us. Thank You Aqua Care Water Treatment and Plumbing 239-939-3656
3.0

I hired Aqua Care to service and treat the full house water filter in my rental home. Initially, they provided prompt and courteous service by cleaning then adding their treatment salts to the filter for a reasonable fee on an as needed basis (4-6 week cycle). However, by the last service call their fee jumped from $20-$25 per visit up to $36.46. When I questioned them about the increase, I was told that my filter system needed more salts than usual due to and quot;heavy water usageand quot;. At this point I became suspicious of Aqua Care since my bills with a previous water treatment company had always been about $30/month besides the fact that my household's monthly water usage had not changed at all. Thus, I terminated my contract with Aqua Care since I didn't trust them to be honest with me about their service billing anymore.

Thank you for your review. With the salt delivery service you signed up for we put in as many whole bags as we can because we never want you to run low between deliveries. Our experience tells us that most systems use two to three bags each time we are there. That is what we print on the salt agreement you signed. We want everyone to know what to expect. Your bill was higher the second delivery because your salt tank took three bags instead of two. I am sorry for the confusion. Its obvious that we could have done a much better job explaining the service when you signed up and when you called to ask for an explanation. Thanks for helping us see what we need to do better. I'd like for you to feel comfortable using us for your water treatment and plumbing needs in the future. I will send you a refund for the bag of salt (plus tax). Thanks again Cliff
5.0

The service technician, Sam was very professional and courteous. He called me when he was on his way to my home, which is something I asked for when I made the appointment. I will use this company again for my regular salt and citric acid maintenance.

Installer, Sam, arrived on time. He was courteous, and professional. He took his time and was meticulous installing the system. He took steps, which would go unnoticed by most, like turning the PVC pipes so that the lettering was against the wall, enhancing how the system looked. He cleaned up so as you wouldn't have known he was here. I have had many installers over the years, and I would rate him among the top. He also serviced my under sink reverse osmosis system. I would strongly recommend him and use him for work in the future. I cannot comment on how well the system works at this time, until I have used it for a reasonable amount of time.

Very satisified, but a little expensive.

Service was prompt and curteous. I would recommend them to anyone.

Description of Work
Rebuild toilet inside The price charged was one half that of another plumber I used this year.

We are your local, veteran-owned plumbing partner, servicing Fort Myers and the surrounding areas of Southwest Florida. Trust us for all of your plumbing needs for a positive plumbing experience every time! We are on a mission to provide plumbing solutions for you!We pride ourselves on our industry knowledge, fair pricing and quality craftsmanship. If no one can- CAM CAN!  …

No, Aqua Care Water Treatment & Plumbing does not offer a senior discount.