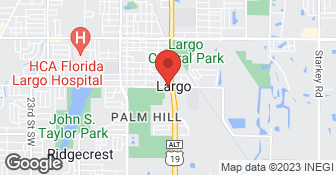 Top Notch Cleaning, Inc has a dedicated staff that has over 30 years of experience in Commercial & Residential Cleaning Services. Founded in Pinellas County in 1980 by Jeff Scholpp, Top Notch Cleaning has become well known for the quality of services provided. We are a licensed and bonded company that specializes in both residential and commercial cleaning and are very proud of our reputation and customer satisfaction. As a small business in a “big business society” our focus on quality, personalized service, and commitment to our customers and staff has enabled Top Notch Cleaning to gain the competitive edge. We strive daily to achieve our goal of complete customer satisfaction. To do so, we use only “Top Notch” equipment, products and personnel. Our dedicated and well prepared staff is ready and eager to serve you, our customer. Top Notch quality is evident as the majority of our clientele have been established by “word of mouth” and repeat, long term customers. We provide the same excellent service to all customers and will succeed in meeting you specific needs. Every customer is our most important one!

I use Top Notch Cleaning Inc for 10-15 years. Yes, I would consider using this provider again in the future.

Perfect. I have used them before & they are my first choice for carpet cleaning. They arrive on time, are professional, do a great job, & are reasonably priced.

I've always been quite pleased with them. They don't always show up on time. They give me a window but sometimes they're running late.

Description of Work
For housecleaning, I've used Top Notch. They've done dusting, vacuuming, mopping, and scrubbing down the bathroom and the kitchen.

Description of Work
Pressure wash exterior siding, sidewalk, and wash interior and exterior of the Windows.

Billy took the deposit money of $5000 and never delivered any material or completed any work. He kept promising that he will come by, starte the work, order material and never did any of it. He wouldn't answer his phone making up excuses that he never received voicemail or text messages. And later on I found out that he has a record and habit of doing this to customer. Stay away from this guy and this company.

Description of Work
We needed to upgrade/install drainage system in our backyard.

This women has the wrong company. We dont do drains and have never done business with this person.Hopefully she get her money back and hopefully she removes this negitive responce.
5.0

ed these kind of services.Great company to work with. First they are great in communication. They returned calls promptly and confirmed scheduled appointments. Jeff worked extremely hard, was courteous and thoughtful. He always made sure that he wiped his feet before walking into the house. Everything looked great when completed. Highly respect his business ethics and compassionate concern for others! Great company. Give them a call!

Description of Work
Cleaned windows inside and out, pressure cleaned the house, house cleaning.

He arrived on time, set up his equipment & went right to work. They had cleaned my carpets a few years back & I was so pleased with the results at that time, I swore I would never use anyone else. He didn't disappoint me, the carpet and tiles looked great. I had a chair cushion that had a small spot on it. He also cleaned that spot without charging extra.

He arrived at the scheduled time & promptly went to work. One of the bedrooms had previously had a desk & file cabinet that hadn't been moved in a couple of years. You could see where they had sat, but he sprayed the area and did a great job of refreshing the carpet in those areas. The entire carpet cleaning went well & the carpets looked like new.

I have used Top Notch for cleaning my windows inside and out for over 15 years. They have also done all my carpet cleaning. This was the first time I used their interior cleaning service. Again they hit another home run. The entire staff are always on time, respectful and fantastic at everything they do. What a wonderful company to work with and have in my home. It is also good to see the same faces all the time. Having long time employees say a lot for a company in my opinion. Thank you Jeff!!!

Description of Work
Top Notch pressure washed my three story home, cleaned the windows inside and out. Plus I used their interior cleaning service for the first time. Jack and Terrie are awesome!!

The lady that has been out is very professional and does a wonderful job. She is fast, detail oriented and proficient In every way. Plan to continue to use her on as needed basis. She is so much more of a professional than our previous service. That one, seemed like every time I needed to find her - she was On her cell phone for both business and mostly personal reasons. She did a good job while working, but could never tell the actual time she actually put in. Therefore Top Notch was a pleasant change - I highly recommend!!!!

Description of Work
Cleaned our home from top to bottom. Due to health issues neither my nor myself have been able to clean our home up to our Own standards. The same lady has been out twice - we love her!!!

It went beautifully. Everything looks amazing; and can't say enough good things about him!

Description of Work
He cleaned my driveway, my entire sidewalk, my front patio, my gutters, and part of my street.

They did a good job. I will use them again when the time comes.

Description of Work
They cleaned the carpets

Top Notch performed an excellent job. I have used this company in the past, and will continue to do so. Fair price, excellent customer service and attention to detail.

Description of Work
Pressure washed exterior of home and driveway; washed windows inside and outside.

got all the spots out that past other services could not remove the spots. Very very happy customer.

Description of Work
Cleaned the bathrooms

Friendly and attentive workers did a careful and thorough cleaning

Description of Work
Washed all our windows inside and out

I have used them in the past and will use them again. They are prompt, professional and charge fairly. They are a quality company which is hard to find these days. I use them 2x a year. I will use them in June to wash the windows inside and out and the roof and in December for outside window washing and power washing the house and drive. I have done this now 2 years. I love this company. Oh and bye the way I have a 3500 sq ft house.

Two other companies had said that they couldn't do the job for me since it was a second floor condo. When Jeff came in to do the estimate he said it wouldn't be a problem, that he was sure that Jack would be able to do it. Jack arrived promptly (actually a little early) and set to work. He set up a ladder reaching to the patio. Going forward, all his activities were outside the apartment. He brought all his equipment up, utilizing the ladder, by vaulting over the railing as if it were nothing. It was astonishing. In no time he had eliminated all the green that was taking over my outdoor space. I was concerned about the floor of the screened in porch since I have no drain, but that too was cleaned beautifully. Some of my neighbors were envious of the job he was doing and hopefully Top Noch cleaning will get some additional business. I was totally impressed with the professionalism and consideration that Jack showed. He completed the job, exceeding my expectations and did it without dragging equipment through my home. I would heartily recommend this company

They did a complete move out cleaning. Efficient and reliable. Everything was done to my satisfaction.

Description of Work
Cleaned the house, windows and floors, including carpet.

Showed up on time. Worked hard and steadily. Roof looks great. Cleaned up up well after the job.m

This team did a wonderful job. We have a two story house that we just moved into this summer, the upper story windows had mold on screens, windows and in the window channels--they cleaned these as well as the covered patio--also had mold. They were very accomodating with my schedule and sent a team of at least 3 people (more may have come later for the outside after I had to leave) who worked really hard and were also very friendly and offered advice for maintenance. Even though this was costly, we have a large house with LOTs of windows and I am very pleased with the work performed. Our house looks great now--best on the block!

Description of Work
Pressure washed siding, covered patio and cleaned windows inside and out

Before the scheduled appointment, I called the office to discuss and estimate the work. Top Notch went by the property to count windows, etc. I was provided a verbal estimate and made an appointment. I called the office before-hand to confirm and advised the office that there was a very high fan in the home that I would like cleaned. A two-man crew arrived promptly to clean the windows and the carpets. After reviewing the home, the crew got immediately to work. Noting the height/location of the fan, they called the office, which sent a taller ladder. Windows were cleaned inside and out, tracks were wiped, screens were cleaned. All ceiling fans were dusted. This is a 2-story house with numerous windows, so it was a big job! They did great work. Carpets were steam cleaned. One carpet had numerous significant stains, which the cleaner indicated may not come out. Some did, some didn't, which was to be expected. Overall, they did a nice job and I would consider using in the future.

It went well. They took care leaving the house as clean as it was before they got there. Even cleaner with the floors. They arrived on time and were very fair with the prices.

Description of Work
Had my tile floors steam cleaned and my area rugs cleaned.

The company was prompt in my requests and workers stayed til all the details were taken care of.

Description of Work
Cleaned the house , including windows and pressure washed the lanai.

Arrived at agreed upon time. All 3 rooms were cleaned and inspected by me. Great job.

Description of Work
Very professional. Courteous and prompt. I would definitely use again.

We Clean Polish and Seal Any Floor  …

A.J.'s Services is a family owned and operated, professional gutter cleaning business with over 20 years experience. CALL or TEXT us at 727-504-2808 for a free inspection & estimate. We offer affordable, fast, reliable, same day service in most cases. We are fully licensed and insured.  …

Veteran Owned & Operated. Serving the State of Florida. No Sub-Contractors Used. We care enough to answer our phones! Give us a CALL, We offer... 100% SATISFACTION GUARANTEED! We stand behind our company and the products we use. If you're not completely satisfied; we will come back as many times as necessary until you're happy and you remain happy at no extra charge to you.  …

Top Notch Cleaning Inc is currently rated 4.7 overall out of 5.

No, Top Notch Cleaning Inc does not offer eco-friendly accreditations.

No, Top Notch Cleaning Inc does not offer a senior discount.

No, Top Notch Cleaning Inc does not offer warranties.

Are there any services Top Notch Cleaning Inc does not offer?