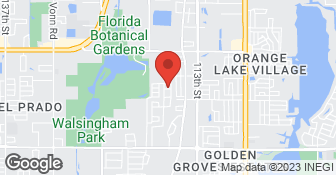 Robert met and exceeded our expectations for this project. Some rooms needed two coats to cover light paint over dark. He estimated the time and amount it would take. He came in on budget and beat his own timeline. He also suggested useful ideas that we had not thought off (i.e. painting a walk-in closet white instead of color for brighter effect. ) The quality of his work was excellent. Be confident to hire Robert if you want a job well done.

Description of Work
We needed 7 rooms repainted prior to moving into our newly purchased house. Our move date was contingent on how quickly the work could be completed.

He is very conscientious about his work, and when he arrives, he gets right to it. He is like the Energizer bunny! His associate painter, Mike, who works with him, is also very conscientious, punctual, polite, and friendly, and pays great attention to detail. If you want a paint job that you will be very happy with, Robert Sanchez is the painter to call! He has been doing this work for 30 years. A lot of his work is commercial paint jobs, so you know his quality has to be up there or he wouldn't be receiving repeat jobs from commercial accounts. I felt his price was very reasonable compared to other painters that I had contacted. And the fact that he is both licensed and insured was a big plus. I had received quotes from unlicensed painters who quoted more than Robert for the job. If I need any more painting done, Robert is the painter I would contact to do the job.

Description of Work
The exterior of my home really needed to be painted including all the trim, as well as the front and side doors. In addition, I had some decorative type beams that were rotted in some places, and rather than having them removed, Robert filled in the rotting portions prior to painting. I didn't want to have the beams completely removed at this point because I was advised that it would be better to wait until the roof needed to be replaced in about five years. I had a difficult time finding a painter who seemed to want to do that for me. Robert didn't hesitate at all.

Robert and his partner painted our three-story beach house last month and we could not be more pleased. They were quick, professional, responsive, and did an outstanding job. My engineer husband, who is picky about prep work and weatherproofing, was thrilled with the quality of their work. I especially appreciated how Robert helped us select the right colors by locating a color match. We've received many compliments on the new color. We also thought the price was great.

Polite, efficient, cleaned up after

Description of Work
power washed and painted trim of house

Excellent detailed work on a difficult home to paint. remnants of textured paint etc. made this a job several painters wouldn't even consider. Fast and professional and extremely clean. I am so glad i found them. a+

I would recommend Robert any time anywhere. He is the best painter. I had pressure washed the house and primed it with two coats of kilz. Robert painted the house with two coats using both airless sprayer and roller. I provided the paint. Robert gave me excellent advice on what paint to purchase and gave me good advice on other projects that I am working on. Robert has an excellent attention to detail and I have had many requests for his card and complements on the work.

Description of Work
Painted exterior of my house.

Pressure Washing Pressure washing included the house, sidewalks, and parking pads. All washed items looked vastly cleaner after being washed. From afar, the house looked like it had been recently painted. The concrete sidewalks and parking pads looked as close to new as they ever will. I was concerned about water getting into the soffits, but thankfully little or none did, as no water problems were apparent. No one was home at the time to give feedback about water going under/around doors. Multiple exterior doors had water ingress along with garage doors. No real damage was done, but note to future customer, move expensive furniture away from exterior doors and/or put down towels to block/absorb spray. Surface Preparation I had used silicone caulk on several cracks. I used a large amount with the intent of scraping and sanding to a flat surface resistant to further cracking, but did not get to the scraping and sanding. I did point out the largest one (around 12ft long, vertical line between original house and addition) and asked for it to be smoothed, which was done quite well by scraping and applying a thing layer of masonary compound to blend. After painting, I had a hard time finding the patch job. Two other smaller areas had a similar excess of caulk, but were not blended before painting. I am sure if I had asked, they would have done so, but I scraped and sanded before they returned to apply another coat of paint. They did come back after all other work was completed to touch up (apply another coat to) the areas I worked on. Painting The finished paint job looks great. All sprayed surfaces look smooth and uniform. The job took a little longer than projected due to rain, but definitely in a timely fashion. Overall Other than water getting under some of the doors, the rest of experience was rather pleasant. My wife receieved one other quote from another well reviewed organization found through Angie’s List, which was significantly higher. For what it is worth, Robert seemed more interested in painting our house (in a craftsman sort of way) than just filling his work schedule. Robert and his assistant were friendly and professional. We have already recommended him to friends and would contract with him again.

We were very pleased with the quality of Robert's work. Robert was very conscientious and did his best to work around us to minimize the disruption. Home looks like new in and out and we would definitely use Robert again. He aims to please his customer!

Description of Work
We had the entire home painted, exterior and interior.

They were excellent. The price was good. I will use them again in the future.

Description of Work
Bay Area Painting & Pressure Cleaning LLC painted the outside of my house around two months ago.

They are reliable, and they do a good job. Their price seemed to be competitive. I will use their service in the future.

Description of Work
Bay Area Painting & Pressure Cleaning LLC pressure cleaned our pool area, the patio around the pool, the enclosure, and clean up the gutters a week ago.

Rob did an amazing job! His attention to detail and the added time and effort given to doing the job right was greatly appreciated. My house is an old (1920) 2 story Craftsman that needed a great deal of prep work. Many gaps and holes needed to be filled and properly prepped for painting. Rob went above and beyond to make sure all the prep work was done properly before painting. The end result is a beautifully finished home!

Description of Work
Exterior 2 story house painting. Including all prep work-pressure cleaning, caulk and fill holes and gaps, primed and applied 2 coats of paint to body, trim and accent ares of house.

Robert Sanchez, owner of Bay Area Painting, was helpful with assisting us in our color selections. He was accommodating and listened to what we expected from him, and was very respectful toward our specific requests. Also he was very thorough and detailed with the complete paint job. We were very pleased with Robert, and would not hesitate to recommend Bay Area Painting.

Juan has over 27 years of experience in providing quality stucco work. He takes pride in each job and customer satisfaction is his number one priority. Call today for your free estimate.  …

Featured in the December 2018 issue of HGTV Magazine, Attract Home Improvement combines the expertise of Chad Vickers and Tony Bugeja, former business and engineering graduates from The University of Alabama at Birmingham. Over the past 12 years, this team has developed the knowledge, expertise, and trustworthiness to help the home and business owner plan and attain their painting project goals and dreams. We have been recognized as one of the top rated residential interior and exterior painting companies in Tampa, FL due to our focus on customer satisfaction and ability to offer many different options that best fit the homeowners needs. Please call us for a free estimate or referrals! Attract is licensed in Pasco, Hillsborough and Pinellas county, and bonded-insured in all counties as well. Will provide Insurance upon request. HILLSBOROUGH License # SP14606 PINELLAS License # C-11451  …

Arrow Structures is a State Certified Residential Contractor who specializes in all aspects or residential construction. From a complete new residential build, to a kitchen or bathroom remodel, to painting a room in your house, we at Arrow Structures have what it take to make your dream a reality. Our motto is Quality before quantity. We look forward to working with you. Feel free to visit our website at: ArrowStructuresInc.com  …

No, Bay Area Painting & Pressure Cleaning LLC does not offer a senior discount.