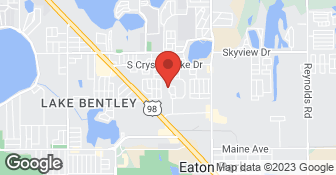 Welcome to Baker Industries Aluminum. One of Central Florida's oldest and most respected Aluminum Company! For generations, thousands of Florida homeowners have chosen Baker Industries Aluminum as their number one choice in building their favorite room in the house, the Florida room! Baker Industries Aluminum maintains the utmost quality in products and services as well as offering customers competitive pricing. Call Bill for a free phone quote or on site design at 863-665-6126 or supply us with your measurements and send to: info@bakerindaluminum.com...

Whether it is heating or cooling, we offer dependable maintenance service throughout Pinellas Park and beyond. Here at Weather Now AC & Heat, we're dedicated to providing clients with professional HVAC services! To schedule an appointment, call (727) 430-0439! We look forward to serving you!  …

Window, door and roofing contractor servicing Florida with premium products, and superior white glove service and care for over 10 years.  …

Richard clearly has many years experience and is an excellent professional. He was meticulous in performing the work and did a good job cleaning up afterward. When he was paid at the end of the job and without being asked, he provided us with a document confirming payment to the material supplier; typically we have to specifically request that from other contractors.

TERRIBLE. First off I had to call him over and over and over again. He would never call me back. When I did get him on the phone there was always an excuse why he couldn't get to me. The best one up until about 2 months ago was "there is not screen available in Florida" due to the hurricane. Still could not understand why he couldn't remove the awnings. I finally quit calling him, call Mr. Screen Repair out of Plant City and they were there the next day with an estimate, and had my screens installed CORRECTLY the next day. I would never recommend Baker Aluminum to anyone!!!! Very disappointing

Rick called us 1-week later and was able to come out and repair all of our damaged screens in less than two hours. I would recommend Rick for this type of work. He was very efficient and personable.

Description of Work
Our pool screens were damaged from hurricane Irma. We needed eight screen replaced. All of the screen repair companies in the area were over booked, but Rick answered his phone and took my information. He was very clear it might take some time to get to us because he was one person, but he would contact us when he would be in our area.

It went well. Screen was removed. A painter painted the aluminum frame. Screener came back and installed new screen.

They responded to my phone call the next day and came to my home two days later. Bill Harshman drew up a sketch and made several recommendations. He called several days later with an estimate which was very reasonable. He secured the building permit within a week and started work the next week. The installation went flawlessly. The installer had 30 years experience, and definitely new his craft. Couldn't be happier.

Description of Work
Screened In my lanai.

Everithing went well from start to finish. Would use it again for in-screening my front porch.

Description of Work
I have replaced my bottom and middle section of the screen with privacy screen (Florida glass).

The experience was excellent. However, the dog tore a hole through the screen, so we may have to have them back here. There is one part of the porch with a little rip. They said it was pet proof, but it's okay.

Description of Work
I used Baker Industries Aluminum. They did some screen repairs.

I called three people on Angie's List for this job. The first one came but never gave me an estimate. The second one never showed up. Bill from Baker Industries Aluminum came out on the day we set up. He drew a diagram of what my enclosed lanai would look like and gave me a price to install gutters in the front and back of the house. He did not pressure me to get my business. The price he quoted for the lanai to be enclosed with vinyl siding and three very large sliding windows was $3600. The windows are also tinted. The gutters were $615. I felt that was a very reasonable price so I called him back to do the job. The windows had to be made but it was a very fast turnaround time for that. He sent one worker to do the work on a Tuesday and by Wednesday noon my room was complete. The room is 10 x 22.8 and it is beautiful. Unfortunately they don't do the flooring so I had to get someone else to do the floor. I am recommending Bill from Baker to my neighbor to get some work done. I would highly recommend them for they do excellent work and the price is great.

Description of Work
I enclosed my lanai and had gutters installed in the front and back.

Bill (the owner) came out personally the same day I called him for a estimate. I got two other estimates from other contractors on AL and he was the most informative. He was the only one of the three to follow-up for our business but he was not pushy at all. Also, we felt that we got the most value for our money with Baker. The concrete crew came out and broke our small concrete slab and laid the new slab's footer. We had to wait until the next day for the city inspection and then next day they came right back out and laid the new slab. All together it took three days to remove old slab and lay new slab, but would have been two if we did not have to wait for inspection. The concrete has to dry for 24 hrs before the porch can be built, it rained for a couple of days after that but once it stopped, a guy came out and built the aluminum screened porch in one day! We could not be happier with the porch! It rained very hard right after it was built and no leaks at all! It is very sturdy and meets hurricane strength wind code. Our dog clawed on the screen as she was not used to it and did not damage it at all! What we really liked about Baker: - Bill (owner) was personally involved the whole process - We did nothing! Bill handled all permits and engineering plans, we just issued the checks! - Very fast and professional installation - They were the only contractor of the three that suggested to attach porch roof to house exterior wall. The others wanted to attach to the soffitt. The porch is more sturdy due to be attached to the wall and has less of a chance of leaking. - He did not try and up-sell us like the other two did! He listened to what he wanted, gave us options and did not pressure us.

Description of Work
Built a 15x10 aluminum screen porch with vinyl kickplate and gutter on the back of our house.

We were very impressed with the service and workmanship. My phone call was answered immediately. This company was on time and delivered just as they proposed. Their employee was very careful and skilled and always professional. I was so glad we contacted them. This was my first selection from Angie's list and I'm glad I joined up!