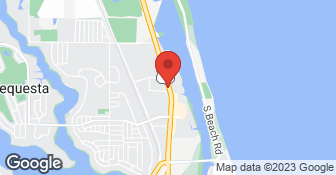 Most everything went very well. They did puncture a pipe, but to their credit, they did warn me it was a possibility. They were also very responsive and someone was there that night (Christmas Eve) to fix it. Everything else went as planned.

The entire house was covered with James Hardie siding and trim. Prep work required replacing over 20 sheets of plywood siding, nail the entire house to current Hurricane codes and wrapping the house with a vapor barrier. The HardiePlank installation was excellent, the craftsmanship of fitting the planks and trim was awesome. Finishing touches by wrapping my support posts and caulking was superior to any others I’ve seen. My neighbors have all remarked how beautiful our house looks, truly a transformation.

The Holeman, Inc. work crew was extremely professional and detail-oriented. They arrived early each morning and worked throughout the day. They were true craftsmen and took great pride in their work. I would highly recommend Holeman, Inc. for Hardie Board installations.

I hired Holeman to remove the old siding on my house and replace it with Hardie Board. They did a beautiful job. Their price was competitive, the quality of the work was super and their professionalism was top notch. I couldn’t be happier with the outcome. I highly recommend them.

Description of Work
Siding with Hardie Board

Quite well. The siding looks great and countless of my neighbors have complimented us on how nice it looks. From the initial contact with the sales staff to the completion of the project, the Holeman employees were friendly. professional and efficient.

They were great I would highly recommend them.

Awesome crew. Very professional and made sure the job was done to our satisfaction. Finished job looks great. Would use them again and would recommend them.

Description of Work
Siding on home

Everything was awesome. My house looks brand new again.

They were great to work with, professional, honest, and communicated well. The workers were highly skilled and paid great attention to detail. We are very pleased with the result and highly recommend Holeman Inc.

Everything was amazing. From my salesman to the crew everyone was extremely attentive and a pleasure to work with. I would definitely recommend to anyone looking for a contractor.

Description of Work
Siding around my whole house.

Personable and helpful personnel from sales to work crew. A little longer to complete than we anticipated, but within the estimated time given. Very willing to work with us and change things as we went along.

Description of Work
New siding on exterior of home.

From the sales, to the Superintendent and installation person all went very well. They were there daily in a timely manner, took exceptional care to ensure the yard and work area were clean and we are very pleased with the final outcome.

Description of Work
Removal of t-111 gable siding and installation of Hardie Board.

Completely replaced wood siding with James Hardie Siding on our 30 year old, 3,000sqft ranch house. After multiple estimates, we chose Holeman. While there were some unhappy details which were a result of the contract workers on our job, everything was resolved. The work was excellent. This is a very professional and well run company. While our job was small compared to the many commercial jobs they do, we felt that we were looked after very well. The result was even better than we had hoped.

It was a pleasure to have Holman Inc replace the Wood with James Hardie on my entire house. My relationship starting with David the Sales person, the crew Tom and Kelly and the Project Manager Andrew was excellent. Tom and Kelly did an awesome and excellent job! I am extremely satisfied and happy with the work that was done at my home. My home looks like a new home! I highly recommend this company.

Description of Work
Replaced all wood with James Hardie

We had new plywood and siding put on our house and Holeman did an excellent job. They were professional, honest, helpful, great with communication, followed through from beginning to end, and did very good work. Our house looks better than we could have ever expected. We would highly recommend this company.

these guys are professional .. what more needs to be said ? it refreshing to deal with people in the building trade that you can trust ... and you CAN trust HOLEMAN .

Thank you! A good review is a wonderful end to the year!
5.0

We called them at the end of August 2017, and a couple of days later we met with their salesman David. He was very professional and explained everything in detail. We were actually surprised about the cost, which we had estimated higher. Our house is not big, but still there was a lot of work to be done. We were told the permit could take up to 6 weeks, but they got the permit a lot faster than proposed. Our contract included: remove all rotted wood, replace up to 5 sheets of plywood for rotting (additional plywood at $100 each). Replace trim on corners, windows, and doors. Hardiwrap installed, and then of course installing the Hardie plank. We got estimates for just primed (painting, caulking, filling nail holes, done by others), which was $8,613 and ColorPlus option which was $10,711. ColorPlus is where the paint is already applied and baked to the boards and you pick a color beforehand, which is the option we picked. We picked Harris Cream for the siding, a lighter yellow, and Artic White for the trim. The job they did is worth every penny, we are so happy we saw the billboard. Our house probably went up $50,000 in value if not more (not that we are selling). We have peace of mind, and we don't have to look at that terrible rotted wood every time we went outside. We experienced nothing but professionalism every step of the way, from Andrew the job foreman, and Charlie and Jason that did the work. Thank you Holeman Inc. The pictures speak for themselves.

Description of Work
We needed to replace siding on our house which is wood frame and had a lot of rotting and problems and it was very unsightly (please see pictures). We had already replaced the siding on the front of our house with James Hardie material from Home Depot. But it is a lot of work to do it yourself. We discovered Holeman Inc, from a billboard in St. Lucie County, and decided to give them a call. We are now very happy that we did, and that is the reason for this review.

Thank you for your wonderful review! Your house looks great!
5.0

They are very professional and communicated well. I will definitely recommend them and absolutely use them, again.

Thank you for taking the time to rate our company. Glad you are happy with your siding installation!
5.0

Two days to remove cedar siding, first day single guy, two guys on second day. Another crew of two finished work with hurricane approaching. All were very professional. A crew checked with us only in person through project. Were very happy.

Description of Work
On rear of house, east side and patio cable. Removed cedar siding, repaired some rotten studs, replaced rotted under planks with plywood. Also replaced east side and most of rear soffit.

The team, Tom and Kelly, were first-rate. Highly skilled with great attention to detail, they performed the installation as if working on their own home. Any questions, ideas, or concerns were immediately addressed. They worked hard to ensure I would be happy with the results for years to come. Great team, superb workmanship!

Thank you for your positive review. Your house looks great!
5.0

Description of Work
Hardy board siding.

Tom and Kelly were incredible to work with. They took care of us and made sure everything was done right. They were a pleasure to have on site every day. Andrew was an excellent project manager and made sure things ran smooth. Very pleased!

The project manager was great. Very responsive & available always via phone. Installation crew was very skilled & professional & easy to work with. There were a few problems with nails hitting service lines but these were fixed quickly at contractors expense.

The company was responsive from start to finish and professional.

Thank you for a great review of our siding installation. Please refer your friends.
5.0

Great job from start to finish. The job turned out exactly as we hoped.

Thank you for your great review. We are pleased that you are happy with your siding project.

We are strictly a demolition company that provides an exceptional service in the southeast region. Need hauling services? We offer that as well. We guarantee satisfaction to our clientele since 2020 and we would love to service your demo projects! Give us a call or click to request a quote today!  …

We ONLY do James Hardie Siding and Shell Construction

How is Holeman Inc overall rated?

Holeman Inc is currently rated 4.9 overall out of 5.

What days are Holeman Inc open?

Are warranties offered by Holeman Inc?

What services does Holeman Inc offer?

Are there any services Holeman Inc does not offer?

We ONLY do James Hardie Siding and Shell Construction