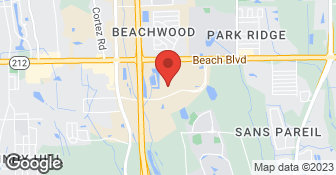 We are a company based out of Jacksonville that prides ourselves on customer service. 99% of business comes from referral and reviews found on the internet....

Not resolved yet after paying them the full amount due. I had a fire pit built after the enclosure, and was given 2 recommendations from them and 1 I hired to come and look at having the fire pit sealed. All 3 sealing company said the seal on the pavers, after less than 6 months have all WORN OFF! I contacted Impact Enclosure to have it done correctly or give me my money back or $980.00 I was charged. This has been going on since beginning of March, and finally I was promised a professional company who specializes in sealing pavers were coming out on Saturday April 30th, almost a 2 months after the initial problem was brought to Impact Enclosure. I asked again, was a professional company who specializes in sealing pavers coming out to do the work correctly, and again I was told "yes!" I received a text on the Saturday the work was to be done at 11:22 am, that Leo was not coming out today, because he is stuck on a job!!!! Leo who did the sealing the 1st time is who was to come back out again to do what he did not do right the first time! Leo installs pavers, he does not do the sealing!!!! So, I was lied to, and had I known it would be Leo who was coming back out, I would not have moved all my patio furniture, plants and grill out on the lawn on Thursday!!!

From the beginning everyone was pleasant, professional and on time. The quality of work is excellent and I would highly recommend Impact Enclosures to anyone wanting a screened enclosure.

Two gentlemen arrived early AM and began laying out their supplies. Even though it was a day of light showers, they began installing the necessary supports. The team then sealed the areas between the bricks and the supports. The screening was put up and the doors (exit and doggy doors) placed in our agreed upon area. By early afternoon they had completed the installation. They proceeded to remove all leftover items and left my yard in perfect order. Would I use/recommend their services? Yes, without reservation.

Impacr was great! Their communication throughout the process was amazing. The installers were on time and they were very efficient. I shopped around and they beat the other companies price by about $500 dollars. Absolutely recommend Impact Enclosures!

Description of Work
Screened in patio

The impact team arrived on time and provided high quality workmanship for our project. Keith G. They were highly professional and answered all of our questions. We are extremely happy and would definitely hire again. Highly recommend!

Adam and the other workers did a fantastic job installing my enclosure. I really love it. Great quality work.

Description of Work
Installed a screen enclosure around the pool and lanai.

Geoff and his crew did an excellent job! They removed an old screen enclosure and installed a beautiful new one over our pool. They were very professional. They keep the area clean and neat. They were great to work with!

Description of Work
Replaced a screen enclosure over a pool

Impact Enclosures provided wonderful customer service! Adam, the repairman, quickly assessed the screen panel which needed repair on our lanai birdcage and was up on the roof within minutes doing an excellent job of replacing it. He also provided an overall assessment of the birdcage integrity as well as providing us with a solution for another critter entry point. He was knowledgeable, professional, and friendly. We'll be using Impact Enclosures for future repairs.

Impact did a great job. They set up my appointment very soon after I closed on my home. Their rep. Alvino, arrived right on time and did a very thorough job. He was very polite and did quality work. I highly recommend him and Impact Enclosures.

Everything went very smoothly. Paul (the estimator) and Adam (the tech) were both very professional.

Description of Work
Porch was screened in.

How is Impact Enclosures overall rated?

Impact Enclosures is currently rated 4.9 overall out of 5.

What days are Impact Enclosures open?

No, Impact Enclosures does not offer eco-friendly accreditations.

Are warranties offered by Impact Enclosures?

What services does Impact Enclosures offer?

Are there any services Impact Enclosures does not offer?