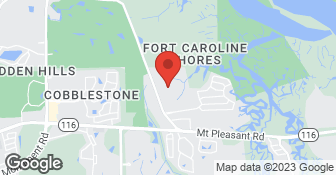 In business since 1983, licensed and insured, family owned and operated...

very well. They were very nice , arrived on time and worked efficiently. Would definitely call them again!!

Description of Work
fixing in put and output to pump

"GREAT"! Toby came by in a couple of days, replaced my broke head and adjusted all heads. You will find no better person and company to handle your irrigation needs than Florida Coastal.

Noticed I had 2 heads leaking when system was shut off. Was referred to Florida Coastal by my neighbor who had some work done. Called late on Sunday afternoon and left message. Was called back in a couple of hours.Told of my problem and was told it would be looked at next morning if for nothing else to come by and cut water off. Toby arrived next day mid morning to examine my problem. With no cut off valve on my system alone, I was told since it was going to take more time than he had available that morning, he would come back next morning when he had more time to fix my problem. Next morning he showed up, located my in ground controls, replaced a part, replaced 2 heads and capped another. Zone 1 now worked without leaks as it was supposed to. I had my driveway redone a couple of years ago and damage was done to my system without my knowledge. Toby said he could get zone 2 working but it was going to take some digging to find out exactly where my problem was. I have a small front yard and zone 1 would suffice to keep my grass watered until hot weather. Toby said he would call me with a time to come back and fix my zone 2 problem. I hate that my problem is as extensive as it is, but I could not be more pleased the fine work of Florida Coastal. I thought the cost of he's services for the time he put into the job was very reasonable.

Very well pleased with both the provider and the job he did. Will definitely recommend to all.

Had new sod installed in March 2016. During the summer I noticed that I needed to hose water a few spots of my lawn. My clock stopped working. It needed immediate attention. Out of 3 companies I called, Florida Coastal could be here in 2 days. That was a lot better than a week with the other companies. Toby, the owner of Florida Coastal, arrived in 2 days. He replaced my clock, raised some heads with extensions and changed a few heads out. I now have a dependable system with great coverage. My cost for the work done and equipment replaced was very reasonable. Will definitely use in the future on any problems that might arise with my irrigation system.

Description of Work
needed my complete yard covered by my irrigation system.

Installed new controller, made sure sprinkler zones were turning on/off. I was very happy with the service.

So far so good. I noticed a difference in our lawn after the first visit/application. The owner provided insight into why our landscape was not growing at peak performance: because we have too many weeds choking out the grass (embarrassing but true) we have been using the service for 4 months and it's making a huge improvement. The company is reliable and efficient.

Description of Work
Provide fertilization and pest management for our lawn/landscaping.

ProKleen is locally owned and operated. We provide general pressure washing services in Jacksonville, FL and surrounding areas. We pride ourselves on the quality work we provide, while delivering great customer service! We offer free estimates and look forward to working with you soon. Please give us a call or click for an estimate today!  …

We are your one stop shop for all your sprinkler and irrigation system needs. Give us a call today for your free quote. First Choice Sprinkler Repair and Lawn Care is committed to excellence in every aspect of our business. We uphold a standard of integrity bound by fairness, honesty, and personal responsibility. Our distinction is the quality of service we bring to our customers. Accurate knowledge of our trade combined with ability is what makes us true professionals. Above all, we are watchful of our customers' interests and make their concerns the basis of our business. We are Licensed, Bonded, and Insured.  …

Tony's Lawn Care has been serving the Jacksonville since 1990. Family Owned and operated we are here to fulfill all of your residential & commercial landscaping and lawn care needs. We are fully licensed, insured and carry Workers Comp. We proudly offer First responders and Military Discounts. Feel free to check us out at tonyslawnsjax.com and like us on facebook(https://www.facebook.com/tonyslawns/).  …

Insured
All statements concerning insurance, licenses, and bonds are informational only, and are self-reported. Since insurance, licenses and bonds can expire and can be cancelled, homeowners should always check such information for themselves.To find more licensing information for your state, visit our Find Licensing Requirements page.
General Information
Free Estimates
Ask for details
Eco-Friendly Accreditations
No
Payment Options
Check, Visa, MasterCard
Senior Discount
10%
Warranties
Ask for details

No, Florida Coastal Irrigation & Landscape, Inc. does not offer a senior discount.

No, Florida Coastal Irrigation & Landscape, Inc. does not offer warranties.