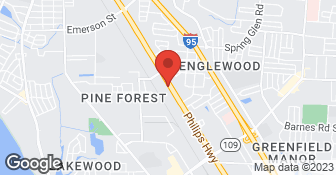 Darley's Plumbing is a family-owned business that was started in 1993....

RainSoft has been dedicated to producing “The World’s Finest Water Treatment” and superior customer satisfaction since day one. We also ensure all of our water and air conditioning products meet customer expectations and demands.With better quality water you can see, taste and feel, the quality difference is clear.  …

Home Owners Water Solutions, Inc. offers equipment that has been ranked #1 in the processing and water softening business since 1966 Nationally and since 1979 in North Florida. We’re passionate about pure, clean water because we know its value. We can provide a verifiable list, in your area, of customers including contact numbers who have had our system for 20, 30 or even 40 years! We deliver our customers proven results by offering lifetime guaranteed water treatment systems that work, do the whole job and save more than they cost! If you'd like to improve the water quality in your home or business, you've come to the right place, in fact, the ONLY place. Our state-of-the-art PATENTED systems will deliver clean water every time for a lifetime! Call today to schedule your no cost no obligation quote.  …

Water Softeners starting at $999 Call us Today! Is your water struggling with Smells, Stains, Iron, Hardness? We got you covered! We offer water softeners, Iron filters, Sulfur filters, Chlorination-Dechlorination. We offer the best 10-year parts and labor warranty in the business! Check out our website at cleanclearwaterfl.com and call us at 904-305-2356!  …

Very well. Technician came and he knew what to do. Explained he was going to do a small diagnostic and then would go up on the roof to unclog via the vent if unable to unclog below. Did his repairs as explained. Was very professional and I felt he was very thorough. Only thing I would have to comment on was I did have difficulty trying to get a hold of the office in the morning. Called at 8:23 am and had to call the emergency number which sent me to the answering service. I was told I would get a call back but didn't. I tried calling again at 9:30 and did get an answer. I was a little nervous thinking I may not get my service but the technician did show up and I felt he did a very good job.

Description of Work
2 bathrooms which are on the same line not flushing and backed up into shower. Line needed to be unclogged.

Thank you for the feedback. We are glad we were able to take care of your plumbing need, but apologize for our slow response. I am forwarding this message on to the technician that helped you to let him know his efforts were appreciated. I am also forwarding this to the dispatch team to discuss how we might be able to ensure future calls are answered in-house and in a timely manner. Please contact us at 904.727.1484 with any additional comments you have that may help us perform our jobs even better. Thanks again, Dale Darley
5.0

I use them because they do good work at a fair price and they always do what I ask them to do.

I don’t have a problem with them. It has always been quality work and that is the reason I use them.

Description of Work
They have done several things for me. I have 6 houses so they’ve worked on every one of them. They have done a lot of different things. The last time I used them they replaced the flow switch on the aerator.

In short: It went GREAT! Here's the background. Had a toilet stopped up. Tried plunging it, and as I was, it was backing up into my shower, thru the drain. I tried two plungers--one over the shower drain and one for the toilet. Didn't work...just more "crap" coming up in my shower. Trip to Home Depot. I had no idea what I was doing, but talked to the guys there and walked out with a 15' snake and a 50' snake. Snaked the commode...nothing. I had no idea what was wrong. This is Easter Sunday morning. I thought, Holy Crap( yes CRAP) I'm in trouble. I needed a plumber, on Sunday, on Easter Sunday no less. By this time, a second toilet wasn't flushing, but at least it wasn't coming up in the tub. So I turned on Angie's List, of which I've been a member for years, and it has never failed me. I contacted two plumbers with good ratings and not too far away from me. They both contacted me within minutes of my call, and their prices were almost the same. I committed to the first guy (DARLEY"S PLUMBING) who called me and said he could be at my house within 30 minutes, and, barring anything unusual, the charge would be $180.00 (1 hour). For Easter Sunday morning, and for the quick response, I thought that was acceptable. I think the name of the plumber who arrived was Mark. I hope that is right, as he did a great job. First off, he arrived within the 30 minutes as stated. I explained the situation, and he proceeded to mentally figure out how the pipes were "layed out" under my slab. He asked if I had noticed (we moved here 18 months ago) an access pipe in my front yard, and I hadn't. He started poking in my plant bedding with a metal rod, in an area of about 50 or 60 square feet to try to find THE pipe, and I'll be darned if in about 10 minutes of poking, he found it. The rest of the story is just academic. He took his magical plumbing tools, and did his magic. He had to run the entire length of the house, as the pipe was in the front yard and the bathroom was the last room at the other end of the house. SUCCESS. He cleaned up, re-distributed the mulch, gave me some instructions on proper toilet operations considering the amount of water these new tanks hold, and left me as one VERY happy DARLEY"S customer. I would definitely use them again. Thanks Mark.

Found our new plumbing company! Have several rentals and we are very happy!

I called the company the next day to get a breakdown of the work as to parts and labor. I talked to the owner and he spent time with me on the phone describing the details of the proposed repair so I could make an informed decision on hiring them. I had to pay a non-refundable fee for time and travel to come out and provide the estimate, which would be subtracted from the total should I hire them. The written estimate was very detailed but needed clarification. I decided to go with Darley and the plumber and assistant showed up late, but had called to say they had been delayed on a previous job. When they arrived they went right to work and didn't waste any time. Since I had not completely understood my options, it turned out I had a less expensive option that I could take but it required the plumber to drive to a store and secure different parts. I chose that option and he drove off to get the parts which were on the west side of town. He had called the distributor first and texted a picture of my plumbing to make sure the parts were correct. Once he returned, he quickly did the repair tested it and then made a neat access cut in the closet behind the bathroom so future access could be available. The small door frame was fitted with a complimentary door so no drywall repair and painting was required. They were neat and clean and left all in good order.

Description of Work
The plumber determined the cause of a leak in the bathroom which had gone under the wall and into the bedroom and making a small flood. He gave me an estimate total for parts and labor combined.

Thank you for the positive response. We will evaluate your comments to see how we can provide even better service in the future.
1.0

Plumber agreed to come for plumbing service between the hours of 8 AM and 12 PM. I had told them I needed to leave the property no later than 12 PM. I was told at that time they would be there. As 12 o'clock approached I called and was told that they were delayed and had a man out sick. The receptionist also stated that she was "filling" in. I have had another poor experience with this plumber on new construction. They failed to provide me with essential details in order to place a warranty in effect on a very expensive whirlpool bathtub. In addition, part of the bathtub maintenance and warranty guide was missing. The general contractor and Darley should have worked together to provide me with better service.

Description of Work
Provider did not show at the agreed time and I had to call for updates on time. I finally cancelled service prior to their delayed arrival.

Darley's Plumbing would like to apologize for your disappointment with us. At Darley's, we strive to meet all of our customers' plumbing needs and to do so in such a way that all of our customers become return customers. We realize that no matter how hard we attempt to maintain 100% customer satisfaction, there will be rare instances where a customer is not happy with our service and obviously you were not. We have looked into the issues you outlined and determined the following: 1) There is no record of a service call being placed with your name or address in 2014. On the day that you have listed as the job date, all of our service and office personnel were at work. We acknowledge that the job you describe could have been our responsibility, but wonder if possibly the job involved another contractor or vendor. We do have jobs listed for your name and address in 2013 and those appear to have been performed satisfactorily. 2) The warranty has been set up for the whirlpool bathtub. 3) The missing maintenance and warranty guide has been placed in your possession. Again, we apologize for any inconvenience that you experienced and would appreciate the opportunity to prove that we are a quality and trustworthy organization. Please contact me, Dale Darley, at 904.727.1484 if you would like to discuss this further.
5.0

I was pleased with the service. They determined what the problem was and I have not had any other problems.

Description of Work
The provider showed up on time and did a thorough assessment of the shower, including using a camera to see behind the wall.

Plumbing for New Construction and Remodeling, Repipes, Plumbing Installation, Plumbing Service, and Plumbing Maintenance for both Residential and Commercial Clients