Above & Beyond Tree Service 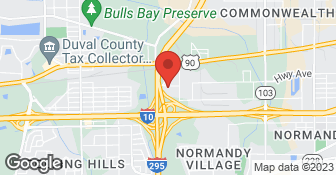 Kevin Brislin, who owns and operates Above & Beyond, has been trimming trees most of his working life, starting as a helper while still attending Robert E Lee High School and continuing part-time while working locally as an EMT and fire fighter. He eventually bought out a friend’s tree trimming business and as his success grew he incorporated Above and Beyond in June of 2003....

Veteran's Junk Removal is a full service junk removal, garbage collection, and dumpster rental company serving the Greater Jacksonville area. With many years of experience, we are efficient and professional and our #1 priority is customer service. We offer free estimates and are reachable 24/7. We take all major credit cards as well as checks and cash. Proudly Veteran Owned and Operated. 10% Military and Senior Discounts. Call us today!  …

Does your lawn need pampering? TruEdge Lawn Care offers affordable lawn care that meets your expectation. Our work speaks for itself. Our expert team strives to provide the best all-around service for our customers through safe & secure payments, hassle-free scheduling, flexible & affordable packages, and accurate prices. TruEdge is here to take the hassle of lawn care out of your busy schedule. Browse our flexible lawn care services, custom packages, and gift cards!  …

"Old fashion American values of respect and hard work put to the highest standard. Dalton Arwood has been a servant to his community cleaning up and caring for the Jacksonville area for five years. He is a honest, fair, loyal hardworking American, looking to make a difference. Call today for a speedy estimate and a job done to your satisfaction. At Arwood Junk Removal we believe every home is unique, and every person has their own specific circumstances and expectations. We strive to build lasting relationships with our clients and are happy that so many of them reached out to us for future needs. They know they can always count on us for flexible, affordable, and considerate services that relieve stress and deliver peace of mind." WE DO NOT OFFER DUMPSTER SERVICE AT THIS TIME SORRY FOR THE INCONVENIENCE!!!  …

Above and Beyond came right away, in a day or two, to give me an estimate on the job. The price they gave was 50% less than the first company that came by and that person wasn't even very nice. I was anxious to get the tree removed and another tree trimmed and they came the next week (even though they had 2 weeks of work booked). I was very happy with their service. They they got rid of everything, chipping it up. They even cleaned up the residue that was left in the street, from the chipper. I'd highly recommend them.

Very smooth, they used a large crane truck to lift large pieces of the large tree, over my home, to the street, from there into the chipper. They were done in approximately seven hours, with everything. A very professional crew. I highly recommend them.

Description of Work
removed a large tree and a medium size tree behind my house.

Crew was supposed to come on Friday, but was delayed due to weather. As promised they came Monday. Did a good job trimming, hauled away all limbs, and raked the yard. I would not hesitate to use them again.

Description of Work
Removed a medium size dead tree and trimmed some other tree limbs.

I hired Aand B based on reviews here and a past experience with them. When I offered the owner Kevin the job, I specifically stated that under no circumstances were they to put any part of the tree on my lawn, and that I also wanted them to leave me some of the smaller pieces to use as firewood. I even told him I could cut it into managable pieces so no need for his crew to do so. Came home to workman hauling big pieces of the trunk with a large dolly and dumping directly on the fromt lawn. I told the workman I had stated I didn't want it there to Kevin, and he said and quot;It won't hurt your lawnand quot; and something about them picking it up that evening or first thing tomorrow. The huge logs were there the next day at lunch, but gone in the evening, leaving big gouges and depressions as I feared they would. There also was no firewood left for me as I had asked - it had already been loaded and tucked away by the time I got home. The only thing they left was a lot of sticks, and wood chips which buried the lawn next to the area where the stump was ground. Someone also left their big gulp drink cup. Wood chips from felling the tree that covered the driveway were blown on to the lawn. Sine it started raining, I assumed they would come by and clean up the mess the following day - they did not. When it was time to grind the stump, heavy rain had started to fall. When complete, the heavy machine made big tracks in the saturated lawn. The workman also moved some bags of yard clippings away from the street - I assume because they were somehow in the way. They didn't move them back so they were not picked up by the city. Kevin called me about the check and I stated my frustrations which seemed to make him mad. He came by, offered no apology for not leaving any firewood or the mess which he didn't bother to look at. He said the truck that picks the logs was broken down - not sure why the logs could not have been transported to the driveway when the truck arrived. He took the check and was gone. Apparently he does not communicate the wishes of his customers to his workers.

Was told our tree was healthy and that he would NOT provide an estimate for cutting it down. The tree is very clearly diseased, we have already received the required permit which also indicated the tree was diseased. Our neighbors also feel the tree needs to come down before it ends up on their house.

We had no issues and were pleased with the work performed.

Fine, they came out in advance to see what needed done then they scheduled the work for about three weeks out. The crew was on schedule, friendly and did a good job.

Description of Work
Trimming and general clean up of shrubs.

This is the second time we used Above and Beyond although the first experience was better than the second. Both times they did and excellent job. They showed up on time, worked non-stop and did a excellent clean up. The second time we thought the estimate was on the high side and they weren't as friendly.

Description of Work
Trimmed a large oak tree in our back yard.

They showed up in time and worked non-stop yet were careful and got done at a reasonable time. Payment was made after the job was done. They did and excellent job with the stump grinding. We got numerous estimates on the job and they were in the middle. I would defiantly recmomend them.

Description of Work
Had a large oak removed and the stump grided.

The experience went very well overall. Two gentlemen came out, did the job well and cleaned up after themselves. They finished the job within 2 hours, and they had a tree grinder, too. I was very pleased.

Description of Work
They trimmed and shaped an overgrown tree that was right next to my home.

Above & Beyond Tree Service

Plant & transplant trees. Land clearing of more than one acre.