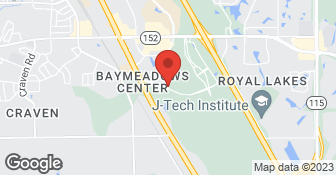 The guy that showed up, Eddy Kyles, was terrible. He drove a compact car and did not even have a ladder with him. He charged me $125. My condo clean-out is a rooftop goose-neck but whatever he did was inside, not on the roof, and the vent clogged again after only two uses of my dryer. He initially said he would come back out but then stopped returning my calls. I eventually called a competitor, Jacksonville Dryer & Air Duct Cleaning. They were great—only charged $79 and used a 12-foot vibrating brush, plus got on the roof to clean out the goose-neck. They also gave me a 30-day warranty. Don’t waste your money on A Lint Free Vent.

We live in a condo and it goes thru the building and not directly out. They do everything right. They come when they say they will. They do what they say they're going to do. They do it quickly, efficiently, cleanly. They clean up after themselves really well. They call me with a reminder. I use them every year. I've had them for 6 years and every year they call. Eddie calls and he is the nicest guy. I don't even have to put it on my calendar because I know Eddie will call me.

Description of Work
They did dryer vent cleaning.

Eddie was very prompt, professional and has an outstanding working knowledge and expertise on dryer vent problems and proper installation of vents. We recently had a new dryer installed and the delivery folks had improperly connected the dryer hose fittings. That led to moisture in my dryer. The wall outlet from the original builder had also been improperly cut out and Eddie was able to quickly diagnose the problem and went the extra mile to fix it. His charges are very reasonable and he guarantees he work. Eddie is a veteran with a lot of integrity and a great work ethic, I highly recommend.

Description of Work
Evaluated problem with moisture in my dryer, showed me why it was happening and recommended a solution

Mike Harper's AC and A Picture Perfect Kitchen and Bath

COIT Cleaning and Restoration of Jacksonville

COIT Cleaning and Restoration of Jacksonville offers carpet cleaning, drapery cleaning, upholstery cleaning. COIT Jacksonville also provides Tile & Grout Cleaning, Natural Stone Cleaning, Air Duct Cleaning, Area Rug Cleaning, and 24hours emergency Restoration services. COIT is the expert in the cleaning service industry with more than 60 Years of Experience and Excellence. COIT Carpet Cleaning of Jacksonville offers its customers unparalleled service, professionalism and quality. We have built a brand you can trust! Coit has been in business for over 70 years. All of our technicians are certified. We are credited with the Better Business Bureau.  …

***$100 OFF AIR DUCT CLEANING!!!Absolute Clean is a small Family Owned Company that doesn't use subs. Your satisfaction is guaranteed. We are dedicated to improving the Air Quality in your home with our Air Duct Cleaning service. Our Dryer Vent cleaning service will put less strain on your dryer, making your clothes dry faster, saving you money on your electric bill, causing your dryer to last longer and MOST importantly, making it less likely that you will have a dryer fire. There are more than 16,000 dryer vent fires each year in the United States. **Refer 2 friends and get your dryer vent cleaning for free!! Refer 1 friends and get $150 off of air duct cleaning** We do not service dryer vents on the 2nd or higher floor that exits through the roof.  …

A Lint Free Vent only has one priority making us the one to trust. No technician will ever attempt to sell unneeded parts. Many customers that we receive come from referrals of other satisfied customers.

How is A Lint Free Vent overall rated?

A Lint Free Vent is currently rated 3.7 overall out of 5.

What days are A Lint Free Vent open?

A Lint Free Vent is open:

What payment options does A Lint Free Vent provide

No, A Lint Free Vent does not offer eco-friendly accreditations.

Does A Lint Free Vent offer a senior discount?

No, A Lint Free Vent does not offer a senior discount.

Are warranties offered by A Lint Free Vent?

No, A Lint Free Vent does not offer warranties.

What services does A Lint Free Vent offer?

A Lint Free Vent offers the following services: A Lint Free Vent only has one priority making us the one to trust. No technician will ever attempt to sell unneeded parts. Many customers that we receive come from referrals of other satisfied customers.

Are there any services A Lint Free Vent does not offer?