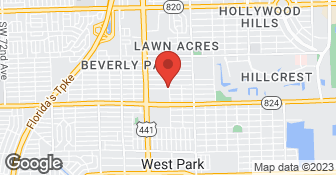 Family owned & operated plumbing contractors with 35 years of experience serving all of Broward & Dade counties. We not only specialize in drain service & sewer repair, but storm drain cleaning & grease trap pumping as well. Our cutting edge vacuum trucks can clean and maintain your storm drain systems which is especially important during rainy season. We have powerful hydro jet trucks that can safely maintain and thoroughly clean any residential or commercial plumbing lines with hydro jet drain cleaning. We are also proud to offer Perma-Liner, the trenchless pipe lining solution that effectively repairs underground pipes without any major digging. We care about our customers, and have staff available 24 hours a day, 7 days a week for any emergency plumbing. Our workmanship & parts are guaranteed. Call now for a free estimate! We are fully Licensed and Insured. License# CFC019202. Open 24 hours. We take Mastercard and Visa. We guarantee all our work. We look forward to servicing all your plumbing needs....

Description of Work
They only do drains and sewer lines. They jet cleaned the main line under my house and then 'scoped' it with a camera to show me the result - was almost like new. I had 2 other plumbers out before them, and had been trying to fix it myself - I was almost ready to break open my concrete floor, but they got everything flowing great with the jet cleaning. |I had them back out to 'scope' the main sewer line in my back yard, and had them clean and re-line it (which is a pretty cool procedure... lot's of info online) Most other plumbers would have dug a trench through the yard to replace everything but Re-lining saved me having to pay somebody to completely re-sod my lawn (just a few sod squares from the Home store to cover the to ends of the project - easy DIY) Re-lining was a little more expensive then 'trenching' but totally worth it, and stronger than new pipe. It's doubtful that I will need their service again anytime soon (maybe a follow up jet clean in a year or so), but they will be the first place I call. BTW -the 'approximate cost' I listed is for all the services combined - I think they were out 3 or 4 times, including once for free to 'snake' one of the lines so I would have a drain temporarily until they could come back to do the big service.

Rich, installed a water heater for me, and he was on time, incredibly efficient, knowledgeable and was so careful not to damage my apartment in the process. I was so impressed by this experience. I found the price to be very fair. I give this family-run business the highest possible recommendation. Outstanding service, integrity, quality, professionalism and customer satisfaction are the governing principals of this organization.

I was referred to this company by a co-worker who is also in the GC business. I contacted Benny Montak and told him that I needed a plumber for a possible leak in my master bathroom. Let me put in a qualifying statement here that will be relevant later on in this review and say that I did not state that I had an emergency nor was I unwilling to wait until the next day or when ever the next available appointment would be. So Benny took my number and told me that Steve would be calling me right away to set it up. I received a call from Steve within minutes and he asked when I would be available. I told Steve that I usually got home around 4:30 p.m., but if necessary I could probably leave work a little early and meet somewhere there before then. Steve said that would be great and I offered 3:30 p.m. Steve told me that a plumber would be at my house at that time. I left work and hurried home to be there on time. Michael arrived at 3:52 p.m. I mention this not because it was a big problem, but I left an hour early in order to be there on time. This is the reason for my B rating on punctuality. Now, the plumber that came to my house was named Michael. He was very professional and seemed very knowledgeable. He said he had been a plumber for over 30 years. I showed Michael the water that was sitting on my bathroom floor behind the toilet and explained that the toilet rocked a bit, and that I felt that may be the cause. I also told Michael that I wanted him to reseat the toilet properly. Michael evaluated the water on the floor and told me that in his experience, the water did not seem to be coming from the toilet being improperly seated. When he removed the toilet, he told me it was not being caused by any drainage clog either. I then showed Michael another area of concern that I had in my other bathroom and asked him for his expert opinion. MIchael gave me some advice on what to do to narrow down the possible problem, but told me that until then, he would not recommend using a plumber for that issue. Michael then went to work on reseating my toilet. He is a steady, patient worker, who obviously knows what he is doing. He was social and personable. He cleaned up the area around the toilet after he finished, and was very neat and orderly with his tools. Michael recommended that I allow the grout to set for 1 day and not to flush the toilet in order to determine if the water continued to pool behind it, which would mean that it was probably coming from the plumbing behind the drywall. I asked MIchael that if that was his opinion, should he explore behind the wall before setting the toilet again, and he did not recommend that at this time. Michael finished, and up to this point everything had gone great. I do not have a lot of experience with plumbers and their usual rates, but having a bit of common sense and employing electricians and other technical professionals in the past, I figured an hourly rate would be somewhere around $75-$90/hr. I was figuring the total cost for what he did was going to run me somewhere around $150-$200. However, when MIchael handed me the invoice, he listed a flat charge of $295 for reseating the toilet plus an additional $8.66 for the wax ring and grout for a total of $303.66. Again, not having much experience with plumbers, I did not question it and wrote the check out, although I felt it may have been a bit expensive. Shortly after, I went on the internet and did as much research as possible on the average price to reseat a toilet. Now, keeping in mind that I was looking at costs from different areas throughout the U.S., and that likely varies by region, but most of the information I found all stated that average cost of that service is somewhere between $125-$200 in labor charges. I am one person who believes that if you take shortcuts or go for the cheapest service or item, you will pay double in the long run, but this charge just seemed a little higher than even the higher end of average I expected. Unless this was charged as an emergency service, but that was never communicated. I will say, that if I am really off in my opinion that this was too high of a charge, I will gladly revise my review to state otherwise. The cost of the service is the reason that I wrote that I would not use this provider in the future. I figure that if it cost me that much to reset a toilet, how much would it cost me to find a leak in the wall behind the toilet using this provider??? Which likely means they would have to remove the toilet again for that, and charge me another $300 resetting fee. I just can't afford that right now. Which is a shame, because I think Michael is very competent. Just as a final note...I initially tried sending Mr. Montak an email through the only email listed on the company's website, but I kept getting a "Failure Delivery" response after trying to send it 3 times.

Description of Work
Removed and reset existing toilet. Replaced the wax ring and grouted around the bottom of the toilet.

Excellent. Company came out when they said they would. They were so thorough that I tipped both servicemen for the extra mile they went in performing their job. Will use them definitely for all my major plumbing needs in the future

Rich came out to a house I was looking to buy after my general inspector recommended my plumbing be investigated due to gurgling in a toilet and a slow rate of drain from a bath tub. Rich arrived early and was already at the house when I arrived. He was friendly and professional. He gave me all of the info I need and more. He answered every question I had and provided me with tons of information as to how things work, rather than just why they need to be fixed. He told me to start with the easiest, cheapest and most obvious things first in order to save time and money -- a rare thing for plumbers, electricians or contractors who typically want to make the most money in the shortest amount of time. I plan on going forward with some of the suggestions Rich made and have no doubts he will be the one I hire in the coming weeks when the work needs to be performed.

Here at Twin city plumbing we offer drain Cleaning and service and repair with minor or major plumbing issues. We guarantee your satisfaction, and we won't leave until the job is done right. We pride ourselves on the quality work we provide, while delivering great customer service! Call or click for your FREE estimate today!  …

We are a newly established family owned plumbing service business serving the Palm Beach and Broward counties. Our promise is simple: to offer reliable, fast, responsive, experienced, courteous and affordable plumbing service to homeowners and businesses. Allen and Peter (the two owners) share together almost 3 decades of experience in the plumbing and building industries. Plumbing is our passion and we leave our houses everyday with one goal in mind: to please our customer by offering our clients honest and quality plumbing services. Whether an emergency or any other plumbing matter, be sure to give us a try! You will not regret it!  …

Lindstrom Air Conditioning & Plumbing has been around since 1975. We’ve built our business around the philosophy of providing superior skills in the air conditioning, heating, plumbing and indoor air quality service industry, backed by the highest quality customer care programs in the industry. We make it our goal to provide homeowners with peace of mind, making sure all of your home systems operate safely, and we help you save money in lower fuel bills by keeping your equipment running efficiently and as effectively as possible. When you call us to make an appointment, know that we take your problems and our job seriously. We strive to earn your trust and business, and look forward to working with you. At Lindstrom, we want to be your number one choice in Florida home service providers!  …

Express Drain & Sewer Cleaning is currently rated 4.8 overall out of 5.

No, Express Drain & Sewer Cleaning does not offer eco-friendly accreditations.

No, Express Drain & Sewer Cleaning does not offer a senior discount.