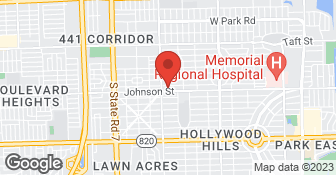 He did nothing for us.

Description of Work
Nothing. Never even answered our e-mail request.

I am sorry about that but I didn't get an email request from you. Please check your email. I checked mine and couldn't find it.
5.0

This man, Rodrigo, is wonderful. Patient, kind, EXPLAINS EVERYTHING IN MINUTE DETAIL. Every step of the way he is checking with you, asking you, making sure the progress is to your specifications. He does not cut corners and the materials he uses are top notch - but he refused to pass the cost on to me - he was more concerned that the job was done right. The job is not done yet - when it is I will post pictures. Suffice it say, I am extremely happy with the quality of the work, the prices and the relationship Rodrigo and I have forged. He has become part of the family. The thing is, I have heard him on the phone with other clients and he treats them the same way! This man is a God send. I think this is the 3rd review I have ever written in my life - he is worth it.

Thank you [name removed] for your posted review! It was a real pleasure working with you and I feel a great satisfaction knowing how happy you are with the work I have done for you. I really enjoyed remodeling your home, kitchen and bathroom. I appreciate the trust you put in me and I am very happy to have earned such a nice review. Thank you!
1.0

They came out to do the job. It was a to remove plaster paint, take off popcorn and do some electrical work. I've got paint all over everything. Paint is peeling and everything has to be redone. I just moved in. They damaged an electrical blind. All the handles are off the doors. You can not believe what these guys did. They didn't cover the floors when they were painting.

Our water heater was leaking and we were ready to consider tankless system. They had put in a tankless system in the same condo building. We used them previously on a major job of bathroom kitchen repair and update - down to the studs. They do great work and are easy to work with. All the work was done at a high quality level and as close as was possible to the original planned completion date. I highly recommend them.

Thank you for your review! It has been a pleasure doing the job.
3.0

At first, Rodrigo seemed to be a great pick for the repair that we needed. His price was reasonable, and his communication with us was initially very responsive and professional. However, as soon as he finished the window repair and received his full payment, his service and professionalism completely changed. As it turned out, he had painted the inside window frame the wrong color when finishing the repair and also had not sanded down the sill to make it smooth like all of the other windows. When I highlighted that these pending finishing touches needed to be completed, he said that he would send someone to do it (Juan Carlos). On at least 2 occasions, our tenant waited for Juan Carlos to come to finish the repair at the time Rodrigo said he would be there, and Juan Carlos never showed up. When I called to follow-up about the repair, Rodrigo said that he would do the final repairs when he came out to change the doors (which was the second project that we wanted him to do for us). I said that was fine, since I anticipated him to begin working on the doors right away. This was in December, and he stopped responding to our emails. Once January came, I contacted him once again to ask him when he was going to begin working on the door repair and final touches of the window, and he proceeded to send me a new quote with a higher price than what he originally quoted me at - saying that the prices had increased in the past month. I argued with him that I had asked him to begin this work back in December and that it was he who caused this delay. His response was - and quot;I understand, but there's nothing I can do about it. If you don't want to pay this price, you can look for someone else.and quot; I don't know why, but I chose to give him one more shot (a bad decision in retrospect). I asked him to proceed forward with the door replacement at the new higher price. He responded via email saying that he would be starting the door replacement and quot;right awayand quot; as soon as the permits were processed with Miami-Dade. By the time the beginning of March had rolled around, he still hadn't contacted us again, nor had he begun the work. When I contacted him again, he said and quot;I'm sorry for the misunderstanding, but I haven't even applied for the permits because I won't begin working on a project until I get the 50% up front.and quot; I have no problem paying a portion up front, but the point is that he never told us that he needed this 50%, and instead of contacting us, he let another two months go by without contacting us or showing any desire/effort to begin the work. I wrote him a very honest email explaining how disappointed I had become with his lack of professionalism in the last few months and that I could no longer wait for him to make the final repairs on the window project. He responded and said that he would send someone to do the finishing touches and that he no longer wanted to take on the door repair project. In the end, I lost four months waiting for someone to begin work on a project that I have already agreed to go ahead with, and in the end, Rodrigo's lack of professionalism caused us to lose a lot of time and added a ton of unnecessary stress for a repair that should have been simple. I'm very disappointed with the customer service provided, and I unfortunately will not be using Active Builders' services again.

Description of Work
Rodrigo was initially hired to repair the cement and frame above our front window, which was beginning to buckle. We also had asked him to replace our front door and garage door (work which he never completed)

It was great working with Matt- he is responsive and responsible. He did a complete overhall of a kitchen and bath. We bought our cabinents and fixtures and he installed. He moved as quickly as possible to get the job completed.

Description of Work
I was only interested in obtaining estimates for an insurance covered job (wood repairs to my porch). Matt was very professional, informative and courteous. He explained on the phone that there would be a $15 charge, why and what it consists of. I was so pleased to speak to a professional, that we set an appointment immediately. He was prompt and wrote an extermely detailed estimate. I strongly reccomend his company, as i WILL be calling him again!

I had been putting off these jobs for sometime and it was such a relief to have them come in and take care of all of the work. They were quick to accommodate all of my requests. I was very impressed by their work and willingness to get the job done. I was satisfied with the work and with their prices.

Description of Work
They changed the faucets, they put a fan in the bathroom, they caulked in the bathroom and kitchen. They also changed a few light fixtures for me. They installed a flat screen TV for me and on the wall and they were able to get rid of all of the exposed wires.

Description of Work
He took the time to get the details on our addition specifications and provided helpful suggestions to make it better. He provided the estimate within a week.

We are attention to detail and prioritize our customer needs. Our goal is to have a trusting relationship with our clients while accomplishing the backyard of their dreams providing the best quality experience for all.  …

One Stop Pavers is a family owed company that has been serving Florida for over 15 years. We service Broward and Miami Dade County. Our services are, but not limited to, installations, re-installations, remodeling, repairs, pool decks and renovations, and driveway. Our employees are professionally trained and experienced to provide the best service possible. We can get the job done quickly, professionally, and still be cost effective. We offer the lowest prices in South Florida so give us a call today for a free estimate!  …

How is Active Builders overall rated?

Active Builders is currently rated 3.9 overall out of 5.

What days are Active Builders open?

No, Active Builders does not offer eco-friendly accreditations.

No, Active Builders does not offer a senior discount.

Are warranties offered by Active Builders?

What services does Active Builders offer?

Are there any services Active Builders does not offer?