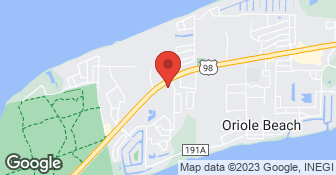 We are a full-lawn and landscaping company located in Gulf breeze Fl.We are Family owned and operated. We do work from Milton, Gulf breeze Perdido to Navarre, Crestview and from Pensacola Beach. I believe in treating other people right and how I would want to be treated. If you want the job done right, In a timely manner, & in your budget give us a Call. We are insured (liability and worker's comp) and a licensed corporation with the state of Florida

This was the most terrible experience I've ever had with a lawn service. If I could give Altman Landscaping zero stars, I would. This is a dishonest company that doesn't know what they're doing. Before they came out to service my yard, I was quoted a price and told that credit card was accpeted. They arrived at the house, mowed my lawn but also mowed over my pathway landscaping plants that were obviously not grass and a brand new tree that was very visible. Because I didn't expect such insane and careless blunders to occur, I didn't notice the damage until after they left my property. I was told that credit card are not accepted even though I even had a text stating that they do take them. But still, paid another way and asked the landscaper if he knew he ran over my path plants and tree, he apologized profusely and so I decided to let it go even though that was about $50 worth of landscaping that I now had to rebuy, and replant. I shouldn't have been so understanding and kind because the next time they returned they ran over my flood lights/flood light wiring!!!! Once I realized that my house was not lit up at night, I saw the very obvious mowed over wire and lights and when I called the landscaper to ask what happened he assured me he would fix the lights. But things got worse. I kept getting told they would be out Friday, and then ran into losing people so it'd have to be next Friday, and it kept getting pushed back and my grass was growing out of control. I then had the bookkeeper call me asking me about payment! I was livid! Zero mention of the lights, the tree, and the pathway plants. Zero apology for lying about taking credit cards. Zero apology for now having an overgrown yard for weeks after being lied to week after week regarding the date of service. This company's a complete mess. And when I explained to their accountant/service rep all that happened she said the owner would be in touch. Never heard anything back so reached out again. Asked for pictured of the damaged lights: sent them over, and still crickets. This has been such an upsetting experience that I actually needed some time to cool off before writing a review. I don't want anyone to have to deal with the unprofessionalism and expensive damage I've had to go through when lawn mowing is all you need. Go elsewhere and save yourself the time, money, and hair-pulling frustration. It's not worth it!

Steel Detailing LLC is your one stop shop for all your Auto, Boat, and RV cleaning and detailing needs. We also specialize in Lawn Care and Pressure Washing Services to keep the exterior appearance of your home in top notch condition!  …

Here at K & A Building Maintenance, we sustain our business on quality and integrity. With over 15 years of experience, we are experts in our trade and are committed to quality from the beginning to the end of your project. We look forward to earning your business.  …

At Taino Pavers LLC we offer paved driveway, patios, walkways, pools and so much more. We do not offer brick walls or concrete work! With more then 15+ years of experience, We are committed to bring you the best quality work for a reasonable price.  …

Insured
All statements concerning insurance, licenses, and bonds are informational only, and are self-reported. Since insurance, licenses and bonds can expire and can be cancelled, homeowners should always check such information for themselves.To find more licensing information for your state, visit our Find Licensing Requirements page.
General Information
Free Estimates
Yes
Eco-Friendly Accreditations
No
Payment Options
Check, Visa, MasterCard
Senior Discount
No
Emergency Service
Yes
Warranties
No

How is Altman landscaping overall rated?

Altman landscaping is currently rated 1 overall out of 5.

What days are Altman landscaping open?

No, Altman landscaping does not offer eco-friendly accreditations.

No, Altman landscaping does not offer a senior discount.

Are warranties offered by Altman landscaping?

No, Altman landscaping does not offer warranties.

What services does Altman landscaping offer?