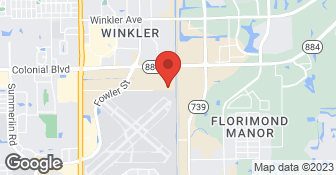 Product is great, Floors look great. I was told by a worker that the flexible vinyl baseboard around our kitchen Island (which is curved) did not come in white and I would have to paint it. I was previously told by Alan Wright before the job was done that it would match and it is stated in our contract that it would "match". It is tan. The rest of the house is white. It CAN be purchased online in white. They also neglected to remove the sharpie marks from the floors and door frames in half the house. My husband contacted the owner and he said we can buy a can of acetone, my husband said this was unacceptable and that he should send someone out and Alan stated he would, about the baseboard Alan responded the tan is what he had and it could be painted. 3 weeks later and haven't heard anything. I went to the showroom, upon entering Alan was heard cursing at someone on the phone. Then yelled to his assistant "Who's there?" She stated my name. He yelled "I don't know who that is!" He came out and said "what's the problem?" I said I would come back at a better time. He insisted I tell him the problem. I did. He again stated I could just buy acetone. I addressed the baseboard, He cursed and yelled and dropped F words. I cried. He stated "oh, you're going to cry now? Get out of my F store." He did not offer to fix the issues after the phone calls and in person visit. We paid $13,000. I did not provoke this behavior! He could have handled this better and I would have come back. He has an anger issue.

Fantastic. They even removed existing tile when it wasn't in the contract. This was a premium product installed by a top notch professional crew. This was part of a whole house remodeling project and my G.C. agrees they did a great job.

Wright Flooring did a FANTASTIC job. Everything went smoothly, and they finished much sooner than I expected. I highly recommend them!

Exceeded my expectations. The crew was on time, courteous, professional, respectful of my furniture & space. Project was finished in the time frame scheduled. Tweaked furniture position as requested. Love the finished product. I had a budget going into this process, knew pretty much the look I wanted, Alan (President of Wright Flooring) recommended the laminate over wood based on my budget, but also because I'm on the first floor in a flood zone. I took 3 samples home to see how my choices worked with my space. Between the color & texture can not tell it's not wood, color me HAPPY!

I am sadly disappointed in the treatment I received from your company. The floor is great and Russ and Jodie did a great job but there was never any follow up by Allan to see if I was happy with the flooring or if the floor was installed properly. Baseboards were installed that looked very nice but when I went to wipe them the paint came off on my cloth and they have started turning black. My thresolds are scratching for some reason and I wasn't warned about that either. I called Mary about both issues and for the baseboard Russ came out but did not replace the baseboard that is completely black. I called again about my five thresolds that were scratching and no one ever turned up to rectify that problem. I am a snowbird and have left florida now. I paid almost $10,000 for these floors and I feel I should have been treated with respect and that both of these problems should have been rectified. I will be writing this up on the internet to warn other people so they are not disappointed. Dyana Driscoll "The Landings" Fort Myers

Had to have another crew come back and replace all of the baseboard and some door frame that was very poorly installed. There are a number of boards that are defective with the finish coming off and a few spots that are low and squeak when walking over them. We have tried to schedule with them to fix these issues and they are no shows on three tries.

Job started and ended as scheduled. Installation crew (Hayden and Jose) arrived on time every day and worked steadily throughout the day. They cleaned up the work area every day and when the job was completed. They were courteous and professional during the entire installation process.

Description of Work
Removed old carpeting and installed approximately 1300 sq. ft. of laminate flooring and sound barrier. The job included the installation of quarter round trim on all baseboards.

We purchased laminate flooring for our home. The installation was not completed as specified in our contract and there were problems that the company agreed to fix after lengthy and contentious discussions. Now the company will not return our phone calls or messages. The only solution offered to fix this problem was to pay over $700 for a better quality flooring to replace what the owner admitted was low quality in the first place. We agreed so we could get this fixed, but now there is no cooperation or willingness to contact us. Do not use this company. They advertise they are a BBB company, they are not and they have an F BBB rating.

CCCOFSWFL has over 30 years of experience in custom carpentry, trim carpentry, wainscotting, custom molding, remodeling, and home construction. We will work with you to update your home to your satisfaction. We are your home's plastic surgeon, giving your space a facelift!  …

We offer mechanical services for a verity of of vehicles, equipment and boats. We also offer welding and welding repair services, and vinyl flooring installation  …

WRIGHT FLOORING INC is currently rated 4.1 overall out of 5.

No, WRIGHT FLOORING INC does not offer free project estimates.

No, WRIGHT FLOORING INC does not offer eco-friendly accreditations.