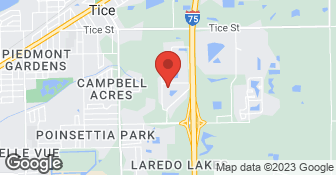 We are a locally owned full service paving contractor. We take our time to understand the needs of our customer’s so that we can deliver the best quality of services possible. M & M Site Development is a Naples based full service paving and asphalt contractor serving residential, commercial, HOA, and municipal customers. Our professional staff consists of full-time dedicated asphalt paving and maintenance professionals who have years of knowledge and expertise in the industry. From the detailed quote to the finished job, Our goal is to ensure all customers will be pleased with the workmanship, quality, and professionalism of Asphalt and Concrete Engineering. We are a fully State Certified General Contractor  …

Naples Lawn Service is family owned and operated. Proudly serving those who serve and have served, we offer military, senior and veteran discounts. Attention to detail, customer service and customer satisfaction are our top priorities. Honest, Prompt, professional, reliable and friendly service provided, Call to schedule your appointment today.  …

Despite all the negative reviews on this company I thought I would give them a try. I signed a contract for a small cage extension with concrete also on 9/18/2020. They were quick to take a deposit, but after 4 months I still don’t have a start date. I’ve called office and texted sales man Dave. They keep saying it Shouldn’t be much longer is usually the response I get. Last week when I call they told me the permit was still not ready. But I have already talked with the city. The permit was approved over a month ago. And they still told me that there was no permit. I called again today. And they tell me that the permit is not ready yet. Them I told them again that the city approved the permit over a moth ago. Now I just have a bad feeling about putting a deposit down with this company. I do not recommend this company to anyone at this point. And keep seeing more and more people with the same problem. I think we should all contact the news and the contractor license board to file complaints.

They were great. The people were very good and very informative of my options.

Description of Work
They replaced a screen enclosure.

Great! They have so much work it takes a little while for service ability to come back after the work was done.

They were good. We had no problems and I would highly recommend them.

Description of Work
They pout up a screen up.

Since my cage was only 2.5 years old I tried to contact Fabri-tech of Fort Myers who constructed the cage for my pool contractor. Since their phones were down, I sent a notice via their contact page on their web site on September 11th. When I did not get a call back, I continued to send notices until I finally reached them on the phone on September 22. The lady who answered said that I would be put on a list and hung up. I then called my pool vendor who said they were forwarding a priority list to Fabri-tech and that I was on it. I called back on September 28th and talked to Rebecca (I think) and she said that I was not on a list but would put me on their list. I called back on October 9th and talked to Dana (I know this name). She looked up my info and could not find it. She said that I was not on a list, she then transferred me in to voice mail ****. I was never able to speak with a human again. I tried to call again on October 17th and the person who answered would not give me any information. When I asked if my pool company had sent a preferred list and if that would help she said no and hung up. Overall, I have four contacts through their web site and 13 phone calls to them and can’t even find out if I am on a list to get an estimate. When calling other cage companies, they tell me that due to the volume of calls they can only handle their previous customers which i understand I guess this tells me what Fabritech thinks of their customers

Description of Work
My pool cage was damaged in Hurricane Irma. FabriTech installed my pool cage in June of 2015 as a contractor through my pool installation vendor. So I tried to contact them to repair my cage once the hurricane was over.

Nightmare and worse. Took five trips and 4 people to complete the job. Sales staff came out and were friendly, but once we agreed to have the work done, no one seemed to care at all about customer service. The first installer got very angry when we said the door was not level. Literally walked off the job and was very disrespectful. Never in all my many years had I ever experienced such disrespect from a company. He did not clean up and left metal shards, screws, etc. all over. The company sent a clean up guy who just blew all into my yard. When I said I had small children he said "they should wear shoes". Next guy finished job and put up bars lop sided. We are talking 3 inches. When we called they sent him back out. Didn't let us know he was even here. He must have known what he had done. Went out and talked with him just to confirm he was going to make the correct changes. Handle was crooked and when we asked about that he said it couldn't be fixed because we would have a hole in the door. Well needless to say it could be fixed. The door and frames were terrible scratched. Next guy came out and said installers get paid for the job, not the time so they all do bad work knowing there is a clean up crew. When it was finally done no one called to confirm. Worst company in 40 plus years of home ownership.

I first met with Charles for a quote and with a discount for my cash payment, we agreed on a fair price. It was the lowest if four quotes I received. The installation was prompt and professional. It passed inspection with no problems. Everyone in the Ft. Myers office was courteous and helpful and the installation crew was awesome, finishing it in one full day. My wife and I are extremely happy with it and no doubt it has increased our property value. I highly recommend Fabri Tech!

Having the right sales person is critical! Will Torres did an excellent job for us and would highly recommend trying to get him. Good communication (bad or good) was essential and he kept me well informed throughout the process. Project completed ahead of schedule. Only complaint was that the final installers did not clean up well. That has been addressed. Overall, highly satisfied with Fabri Tech.

It took three times for them to get the concrete pad poured to the proper specifications, but along the way they wrongfully dug out a 12 x 12' section of my lawn which they promised to replace but never did. Multiple calls to the company yielded mediocre results. The doors were mounted backwards, water doesn't drain from the pad, so I am constantly bleaching to avoid mildew, and the SprayCrete that I paid for is peeling up just a year later. I keep calling the company but no one ever returns my calls.

Description of Work
We hired Fabri-Tech to do a small screen enclosure off the back of our house.

I had used Fabri-tech a year or so ago and was quite pleased (and did a positive review here). In this case, they referred me to a different number. I asked "Is that also Fabri-tech" and they said "he does all our repairs". I pressed "Is this Fabri-tech" and she said "yes". I called, and reached a gentleman who quickly gave me a quote, and said he would be by the next afternoon late (6/23/15). When they did not show, I called again - no answer, left message. It is now a full week later and still no return phone call, and no screen repair. I tried researching the number and person and it appears Fabri-tech has outsourced their screen repair to a Christian Evans who had a small screen company. I asked him (on the first call) about the relationship and he was similarly vague at first, but then told me he was independent, and Fabri-tech outsourced as "they were not making any money on repair". But since he is operating under their name (at least on referral from the primary number) it seems only fair to associate the review with Fabri-tech. I will now be contacting someone who will return calls and show up. It is a shame, as last year I found them professional and quick.

Description of Work
I contacted Fabri-tech at their main number to replace 5 screen panels.