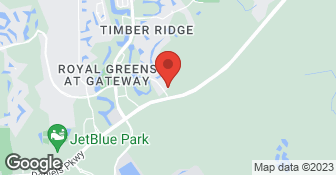 Are you searching for a company that can replace your existing ugly driveway or floor with something beautiful and long lasting? Imagine how it would feel to work with a family owned and operated business where the owner would personally take the time to explain to you the different types of coatings available, the benefits of each and show you examples of how they could look at your home or business. He would also "listen" to what "you want" and work to help you get exactly what you are looking for. And all of it hassle free because from start to finish you would only be working with the owner or a member of his family. Licensed & Insured. Additional DBA - Creative Coatings, Forty Six Enterprises Inc....

We are a locally owned full service paving contractor. We take our time to understand the needs of our customer’s so that we can deliver the best quality of services possible. M & M Site Development is a Naples based full service paving and asphalt contractor serving residential, commercial, HOA, and municipal customers. Our professional staff consists of full-time dedicated asphalt paving and maintenance professionals who have years of knowledge and expertise in the industry. From the detailed quote to the finished job, Our goal is to ensure all customers will be pleased with the workmanship, quality, and professionalism of Asphalt and Concrete Engineering. We are a fully State Certified General Contractor  …

We work on all size projects with Homeowners, General, Building,and Residential Contractors, Realtors, Property Managers, , Private and Public entities. Our services include Commercial, Residential, Industrial, Exterior, Interior, Deck & Dock Cleaning and Sealing. We also offer pressure washing services, minor drywall repairs and roof painting.We are a licensed and insured for your protection. We are a seasoned painting company with over 15 years of professional experience. We are committed to top quality craftsmanship at reasonable prices. We offer a 10% discount for Seniors and make monthly charitable contributions to St. Jude's Children's Hospital. We also offer a 10% special military discount for painting/pressure washing services when military ID is presented. We provide free estimates and color consultations. ColorExpresspt@gmail.com visit our website at www.ColorExpressPainting.com  …

5 employees. No subs. Cost is determined by the job. No travel charges. No service charges. May contact through email.  …

The contractor put a coating on my lanai. It has cracked right away.. Additionally, I dropped a can of lacquer on the coating and it damaged a small area. I have been trying to have a repair done to the small area but the contractor has been totally unresponsive. He or his secretary/staff repeatedly have told me for about 6-7 months that they are coming out to fix it but fail to show up. Even though I told them that I am ready to pay for the repair. I am sorry that I ever used this contractor. I have 2 more jobs left to do, a driveway and my garage, but I am looking elsewhere. My opinion is stay away from this contractor. If you damage the coating in any way he does not even want to know you if you need a repair. Plus his coating cracked.

Description of Work
Put a coating on my lanai.

The work crew showed up on the promised scheduled date. Both employees were pleasant and went about their work without any delays on their part. The finished product was excellent. The color scheme matched our lanai surroundings perfectly. The overall appearance looks fantastic!

They did a great job, even dealing with constant summer rain storms that forced them to re-do items as they didn't set up before the rain hit. They were there each day when it was feasible and I was satisfied with the work. The take home message is that A) they cannot control the weather and B) if you do this type of renovation in the summer, expect some delays.

Description of Work
I hired Creative Coatings to resurface my pool deck. I had a solid painted pool deck before and now have a stenciled stone pattern. Its been 2 years already and its held up very well and I've gotten great compliments on it.

My lanai is beautiful. It doesn't have stain like the other decks, and there are no cracks it is beautiful. They covered my pool, so it wasn't all dusty and dirty, they cleaned up after themselves, and they were great. I had picked the colors that I wanted, and they sprayed those. Their price was much more reasonable, than the other coating company that we went to.

Description of Work
We used Creative Coatings & Textured Surfaces. They completed redid my deck. They did two coats of a thin cement or sealer, then they put down two coats of the base coat , then they did 3 contrasting colors, and then 2 coatings of the sealer.

Came to work on time and were all business easy to talk to and listened to our conserns. The foreman Joseph is a true craftsman and artist. Cleaned up everthing and left everything spotless would recamend to friends and family. Good comuication with Larry and Kathy. Thank You for a job well done.

Work not performed yet.

Description of Work
I have selected this contractor to do the work. We have agreed on a price and have a signed a contract.to repair my driveway, the job to be performed in January 2014. The work consists of: repairing all cracks in driveway surface, applying a decorative pattern/coating on the driveway, and a protective coating on the garage floor.

Our pool deck was 20+ years old and had cracks and holes in the surface with river rock exposed. The owner of Creative Coatings gave us the estimate... he was very professional, described the process clearly and was the primary reason we selected his company. The job was estimated to take 5-7 days, and ended up taking 10 days... not a problem as we assumed it would take longer.

Description of Work
Removed old pool deck surface, applied layer of base cement, spread layer of colored cement, sprayed and troweled layer of textured cement, and rolled on two coats of stain-sealer. The entire process took a few days longer than estimated. However, the finished surface was better than expected. We plan to have them back to resurface our driveway and garage floor.

Larry initially said they couldn't get to my project until the end of September and I was OK with that. However, in another conversation I told him that I had other projects planned that couldn't happen until his work was done. Rather than hold me up, a window of opportunity opened so that my project could be done sooner. The guys who ground the surface used a vacuum attachment in order to keep most of the dust from getting into the pool. Then, another team came to apply the primer. I had an uneven floor and was concerned about puddles forming under a brand new cabinet. They adjusted the pitch of the floor so that there will be no puddles forming near the house anymore. When the color was applied, I had input into how light or dark I wanted the overall effect to be. They then applied one coat of sealant immediately to protect the deck from on-coming rain. They returned a few days later (due to rain) and applied the second coat and painted the drain. A second project done at the same time involved power washing the driveway, using sand to fill in grout lines, and sealing it. Both jobs turned out great. The driveway looks very nice and I'm glad I had it done. However, I am delighted with my new floor in the lanai/pool area. It now looks so bright, clean, and attractive. All of the men that I encountered during the course of this project were polite and expert at what they were doing. In fact, Brad took it upon himself to create a border around the lanai as his personal touch. I didn't ask for it but like the effect very much. I would have no problems recommending this company to anyone.

Description of Work
When we bought this house, the deck around the pool area was stamped concrete that was peeling, bleached out, and an awful color. After trying to find a company to address the issues, another contractor recommended Creative Coatings because one of their customers had had a positive experience. So, I met with the salesman who agreed the current floor needed attention badly and he showed me samples of what his company could do to transform the deck. Larry was very helpful in advising me. His men first ground off the top layer of finish. They then used 3 coats of primer in order to fill in the waves and gaps from the previous floor. They then applied color and 2 coats of sealant. They also painted the drain. The driveway also needed cleaning and sealing. So, the figure above includes the cost of both jobs.

The sales rep came out to provide an estimate. He arrived as promised. Nice enough but provided a bare bones estimate that seemed on the high side for the work to be done. After a couple of previous attempts to remedy the problem in the past with simple solutions (painting and staining), we decided to do it right. Communication, or lack thereof, was our biggest complaint. Never knew when the workmen might show up or come back. No explanation as to what was being done or how long the process would take before the next phase began. Once work started, everything went quickly. Looks great now and makes us wish we had done this process sooner.

Description of Work
Clean via sand blasting driveway, apply coating to existing concrete drive and then two coats of sealant. The driveway was stamped concrete and had faded and chipped over the past 20 years.