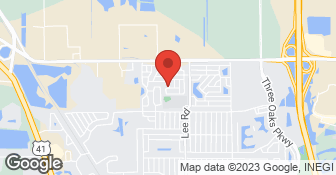 Specializing in handyman work, remodeling, low-voltage electrical, and more! We guarantee your satisfaction and we won’t leave until the job is done right. We pride ourselves on the quality work we provide, while delivering great customer service! Check out our services offered and call or click to schedule a free estimate today!

With over 10 years of experience, I started building my business 2 years ago in 2018. I can handle all of your projects - big or small. My goal is to provide the highest quality of work to my customers in an efficient and affordable way.

He was late for estimate, then advised he would be here on Friday morning, he never showed up or called...sent email to him Friday evening, he apologized and said he could come Sat morning, I did give him the benefit of saying that early Monday morning would be ok.....he said he would be here.....again, he never showed or called! My husband emailed him again...ohhh..he was sorry, he was tied up in...

DESCRIPTION OF WORK
He replaced 3 screens on our lanai.

No call no show

DESCRIPTION OF WORK
This company now goes by the name of ProVee. I called over two weeks ago to schedule an appointment for an estimate for screen repair to my pool enclosure. After about a week, my wife received a call from the owner stating that she had been "out of the country" and appologized for no one having responded to my phone call. She promised that someone would call either last Wednesday, Thursday or Friday. As of this morning, Monday 2/25, we have not heard anything from this company. And, DON'T WANT TO!

I reached out to several businesses on Angie's List with a good rating and proximity to our home but they were the only one that responded with an estimate. They arranged a time to come out to view the area needing repair, then sent me an estimate by email, and I agreed to have them do the work. They agreed to come by in the next few days. They did the repair and mentioned that there were a couple...

DESCRIPTION OF WORK
Bob Biser -- now Provee Services, LLC -- did a great job. They repaired 1 screen in our lanai pool enclosure that was blown out.