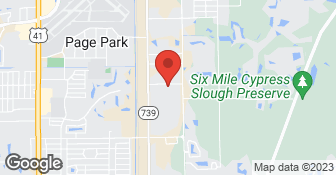 Since 2004 Action Cooling & Heating Inc. has been providing expert service to all of Southwest Florida. With over 30 years combined experience in all facets of air conditioning, Action Cooling & Heating Inc. has amassed an impressive list of thousands of satisfied customers by way of their knowledgeable and friendly service technicians, prompt and timely scheduling, and 24 hour emergency response....

I was told that I there was a leak and that I needed a new compressor. They charged me $577 for a compressor. Another reputable company told me it cost $30 and they would charge a total of $90 for compressor and installation. To replace my AC system Action Cooling quoted me a price of $7183 ( from which they would credit me the $577 I had already paid) for a total of $6,606. Another company for exactly the same system quoted me $4,435. When I confronted AC with this they claimed that it was not really a compressor (even though the bill and subsequent email clearly states it was) and that they had waived an $85 service call and waived the $135 charge for R410 A. Had they charged me for those two items, I was still overcharged by $267. I did give them a chance to give me a refund for the difference but they did not.

Description of Work
Ac was not working

We have our heating and a/c guys come all the time. We have a contract with them. They always try to upsell you all the time

Description of Work
They do our maintenance.

I did not use them for my project due to the completely rude and unprofessional experience during the initial house call to see our project. The rep had the worst attitude. He clearly must hate his life and job. Our remodel thus far has gone great and we have worked with some truly great people. So sad I didn't check Angie's list before calling this company bc it was a huge waste of time. Not surprised in the least at their horrible rating.

They sent a guy out that was supposed to do a service call. He did a crappy job and hardly did anything. He serviced two air conditioners and spent 20 minutes on site. It was a prepaid service. I got mad when the guy called one of the Senior Managers and had a customer service representative and the guy come out and listened to everything and said here's what he's going to do. He never followed up or did anything. We were trying to get to the bottom of what was going on with them. We didn't know if we needed a new air conditioner or not at the time, but we didn't trust them after our previous experience.

I wanted larger ducts. I thought it was very expensive.

Description of Work
Quote only to replace air ducts.

They inspect AC and said nothing was wrong with unit. I will be using them for the extent of the contract.

They could be more honest with their customers. Replacing the system was unnecessary, they said that it was.

Description of Work
They gave me a quote for a new unit.

Their service calls are sales calls. They should send out a serviceman instead of a salesman. Their pricing is pretty bad.

Description of Work
They told me I needed a new system. It was a service call.

They're service calls are sales calls. They would come out and do the work and then turn around to try to sell me something.

Description of Work
It was a three year service contract. They put on some type of hard start service protector. It was for maintenance.

What technician comes to a condo, while the owners are home, installs a part and never comes in to tell the people or to try the ac to see if it works. These people are crooks.

Description of Work
Came and put a fan motor in my elderly parents' air conditioning and never even came into the condo and told them they were there. Today is Monday and the ac has stopped working completely. It is 86 in their condo. My father is on oxygen and my mother just had surgery and after calling FOUR times I finally got a call back at 10:39 pm and that's when I found out that a part was installed on Friday, without my parents' knowledge. They were home. I live right across the hall and I was home. These people are dishonest, untrustworthy and EXTREMELY disorganized. THEY PREY ON THE ELDERLY and that is despicable. I plan to call Angie's List to make a formal complaint, as both my parents and I are members.

Professional Air Duct & Dryer Vent Cleaning. As a home inspector licensed in the State of Florida, I realized there was a need for air duct and dryer vent cleaning during many home inspections. We utilize one of the most powerful and effective air duct cleaning systems in the industry. Go green with our botanical sanitzation process and eliminate stubborn odors naturally with our ozone oxidation. Lint buildup in clogged dryer vents will cause your dryer to run hotter and longer. Save money and prevent a fire by having your dryer vent cleaned regularly. We look forward to serving you! Our technicians are well trained and knowledgeable. Prompt, clean and courteous! (FL License HI7933)  …

With over 50 combined years of HVAC experience, we are here to address all your heating and cooling needs. We specialize in duct work and air flow. Ask us about our military discount.  …

Action Cooling & Heating is currently rated 1.9 overall out of 5.

No, Action Cooling & Heating does not offer eco-friendly accreditations.

No, Action Cooling & Heating does not offer a senior discount.

Are there any services Action Cooling & Heating does not offer?