With Angi since August 2008 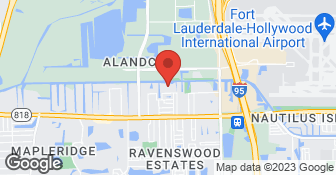 Robert and his team were true professionals. They promptly responded to our request, found the issue (broken sewer pipes) and followed up to get rid of the problem once and for all. We tried for 4 YEARS with Truly Nolen and they never resolved what took DAYS for Robert to accurately diagnose and resolve. It's so nice not to hear critters in our walls and attic. They quickly responded to our questions. We are very grateful.

Description of Work
Get rid of rats and cockroach infestation

They were fast and very reliable. I highly recommend this company.

Description of Work
The person called me within the first 30 minutes. He showed up a few hours later. He gave me an estimate, and we signed an agreement. He solved the problem within a few hours.

He was very good at arriving promptly and getting rid of the animal. In addition, he advised me it would be killed quickly and humanely. I had heard horrible stories of rodents left in traps to die a horrible and slow death. I had written that he did a good job, but was distressed by the cost. I had to to come back on here to add to the fact that when I called Robert and explained my misgivings about the cost, he LISTENED. He explained his take on it and I explained mine. What I appreciated is that he listened, was interested in me as a customer and wanted to make me happy. We did arrive at a compromise that I believe we both felt good about. What I appreciated was that he was opened and took the time to speak with me. That is good customer relations. Thank you.

Description of Work
Remove a rodent.

The company promptly came to my daughter's home and inspected the situation. Jerry, the owner, clearly explained the seriousness of the problem and described their approach in rectifying the situation. The rat problem was resolved in days. They blocked several of the access points into the home. Several other access points needed a skilled carpenter to repair holes. Jerry assisted us in finding a skilled person for the repair work. Also, Jerry easy to get ahold by phone and answered questions as needed during the process of resolving the problem.

Description of Work
My daughter discovered a serious rat problem in the attic of her home.

I cannot recommend a company more highly!! As a veteran Realtor, in addition to professional service for my home, I deal regularly with home service professionals across all industry sectors. That said, Robert from Rat Control of Florida stands out in all aspects of customer care. Robert offered a non lethal solution for removing rodents from my attic that no one else proposed. Hint.. rodents rarely survive when typical trap and release methods are used because they cannot adapt to new surroundings. The method that Robert used was 100% effective, quick and also eliminated the possibility of smell associated with traps or poison. Once the job of eliminating Rodents was completed, the exclusion work recommended by Robert and performed by an employee was also more thorough than what had been proposed by other companies. The fair and moderate cost for superior first rate service was yet another clincher. Again, I cannot recommend a company more highly!

Description of Work
Rodent removal from our attic

Robert came out the same day I called to inspect my attic. He took his time and inspected my house inside and out. In the end he found no evidence of mice so there was no charge. Based on the level of professionalism and their honest business model I wouldn't hesitate to recommend them.

4/23/2019 We had been experiencing some noise in the attic. One day I peeked in and saw a dropping. Procrastinated a bit and then looked up folks on Angie's list and finally called Rat Control. And I am glad I made that phone call. Robert showed up on time (even 5 min before) and he did let me know and asked me if it was OK for him to show up early. He did a thorough inspection of the house, roof, attic and outside the house and finally came back with a recommendation for the treatment along with a plan for the treatment/ fix of the problem. He recommended a smoke test to understand if there were plumbing issues which is giving Rats an entrance along with 2 that he found in the attic. He also found a screen tear on the roof which was probably a bigger animal so he also recommended that we have cages outside. I felt at ease with his level of details, thoroughness and professionalism. He laid the traps that same very day and mentioned that the overall treatment/fix will last around 10 days. He also got Adam in for a 2nd set of eyes to make sure that Robert caught everything from his inspection. I am a firm believer of getting things done right the first time and being thorough about it. The smoke test was the right thing to do. It also gave me peace of mind that my plumbing is perfect. The treatment plan worked and we caught rats dead and alive. They finally sealed the attic for any new entrances. The screen repair on the roof requires a roofing professional and they recommended that I go that route. They also disposed a racoon which the cages caught. The level of professionalism, the communication, thoroughness, courteousness, punctuality, responsiveness to my texts and calls along with attention to detail was par none. I would highly recommend that you hire Rat Control if you have similar issues. They took all my stress away. Thank you Robert and Adam.

Description of Work
Rats in the attic

Rob called within 15 minutes of my request for a quote and arrived about an hour later. I had been working with Terminix but they kept telling me they couldn't do anything except put down a few traps. When Rob came over, he did an inspection and a "smoke test" and in about an hour determined how and where they were getting in. As it is a broken pipe, it's a plumbing issue so he wasn't able to solve the problem but recommended a good plumber. He is knowledgeable and professional. I would absolutely hire him again (but hope I never have to!).

Description of Work
I had uninvited furry creatures getting into my house via a broken pipe.

After spending thousands of dollars with companies who “drive little mouse cars”, but could not catch rodents, I found Robert from Rat Control on Angie’s list. From the minute I met him, I knew he would be the guy who would solve my rodent problem. He immediately began catching the critters in my attic and in my kitchen. Not only did he rid my house of the rodents, he found the root of the problem. He showed me pictures of the issues with the roof, including the huge holes in the wood under my roof tiles. After I had a new roof installed, I called Robert who came back out to inspect that the roof was placed properly and no holes were available for rodents to enter my home. Robert is not only professional but punctual and thorough. Robert and his colleague are definitely experienced in their field and afordable. He provides you with the service that is worth what you’re paying for. He provided me with the peace of mind that my rodent infestation had been solved, and I’m able to sleep well at night. I would highly recommend Rat Control of Florida to anyone who is facing issues with rodents, and I will definitely keep his number to call in the future in case I have this issue again. Thanks Robert for a job well done!

Robert called me the evening after I requested bids on the service. He thoroughly inspected my house and gave me a detailed quotation for services the next day. He explained the reasons for everything to me. He began work right away. The entire job took a little less time than expected. He and his staff are knowledgeable, responsive, thoughtful and professional.