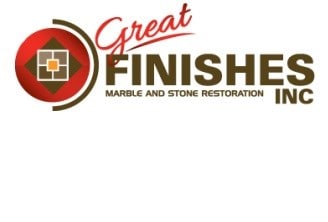 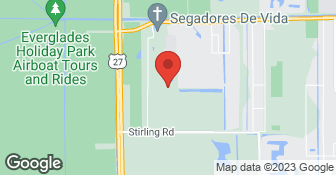 2014,2015,2016,2017,2018,2019 and 2020 SUPER SERVICE AWARD WINNER. At Great Finishes Inc, our goal is to always provide the best customer service possible. We use state of the art equipment and products for the highest quality restoration and refinishing. Our customer service is unbeatable. Each and every project is taken up by trained, experienced professionals. We bring true craftsmanship and pride to every project. Family owned business focused on customer service, quality and craftsmanship....

14% off - Driveway, Sidewalk or Walkway Pressure Washing Up to 3,000 Square Feet…

$25 Credit Toward Floor Tile and Grout Cleaning and Sealing…

$25 Credit Toward Marble or Granite…

I could not be more happy with Wes and his team and my floors. Wes came out to my house and went over his process and then emailed me a quote that evening. I had a good feeling about Wes and I found his quote to be reasonable. I had heard about the matte finished travertine but I hadn't seen it in person. They offered to do sample areas on my floors to show me the difference between matte and satin. I chose the matte, it really tones down those yellows in the travertine and creates a much more modern looking floor. The guys were there 2 days as originally stated and every precaution was made to keep my home clean. They took pictures of the location of my furniture and decorative items and placed everything back where it was originally. They were all just the nicest, most respectful guys and they did such a great job on my floors. Wes also polished my granite countertops at no additional charge, at his suggestion. I highly recommend them!

Description of Work
I needed my travertine floors polished.

Excellent service by good people! Definelty will hire them again or refer my friends to them. Perfection at its finest. A+ performance

they were prompt and they did a great job on removing the grout haze on my new tiles. very reasonably priced and Wes is very professional. they delivered as promised. will definitely rehire and refer

Professionalism was the key to a great experience; these guys did a great job! They did a wonderful job at bringing home granite surfaces back to life.

Description of Work
Marble and Granite

Great Finishes restored and polish all of my home's marble floors. The service was excellent and very professional. They completed the project on time with no issues. They carefully moved all the furniture. Floors look like new, shinny and beatiful. Wes Clark is the owner, and he himself visited our home for the estimate and also supervised all the work. I will hire them again anytime.

I have never left a review and I apologize this one is late! I was looking to get my floors done and I called in 2 companies and one of them was Great Finishes. The prices were similar but I went with Great Finishes because Wes was personable, took his time to really walk me through how it would be done and promised he would be there the entire time. When Wes and his crew came to the house it was great. There was a lot of build up because the floors hadn't been done by the previous owners. At one point one of the men was on my floor with a blade to scrape off the wax on the outside. I could keep going but I think it's clear how happy I was about the entire experience. I will definitely hire them back when it's time.

Description of Work
I had my marble floors cleaned, buffed and shined

Wes, Louis & David did a great job working on our floor. They’re all professional and very customer service oriented. Ours was a challenging floor, but they did a great job because they put the extra effort into it. I would highly recommend them!

It was a pleasure doing business with Wes, the owner. The team, Wes, David, and Louie arrived right on time and got started immediately after introductions and instructions. David and Louie are very professional and very polite young men. My new floors were a mess with construction dust, grout haze, tape residue, and stains. The end result was far better than I expected! I am a truly happy customer and highly recommend this company.

Great job guys! Had terrazzo, marble and cuban tiles worked on thru out the entire house and they did an excellent job. Very punctual and friendly. Happy with the results.

I spoke to Wes on a Sunday night regarding my need to have my floors professionally cleaned. I had a short time time frame and was able to schedule the services for Tuesday morning. He made some changes to his busy schedule to accommodate me. He arrived promptly on Tuesday with two assistants. The three of them took the time to make sure that the job was to my satisfaction, and his. No areas were missed. They spent extra time and effort (Wes did a lot of the work) to make sure the hardest areas were completely cleaned. I have nothing but high praise for the job they did. They finished about 2:30 and the floors looked amazing. I would highly recommend this company.

West came to give an estimate and said it would be a one day work. They were here on time and completed on time. There was a red stain in the stone and they were able to clean it up. Highly recommend!

Wes and his team showed up promptly, did a great job and were always very concerned about my satisfaction, going out of their way to make sure I was happy with their work. I will definitely call them again and recommend them.

Description of Work
Marble and Granite Cleaning, Repair and Polishing

Wes and his crew were extremely professional and did a great job on my floors. We met with other companies and felt that Wes (Great Finishes) was the most knowledgeable and the price was very reasonable. I am thrilled with the results. I would highly recommend them.

Description of Work
I needed my marble floors polished

Exceptional quality work by a extremely professional team. Exceeded all expectations with their attention to detail in delivering remarkable results - the floors look "newer" than when first installed. A completely outstanding experience!

Excellent! We are very happy with the results. Such a group of professionals in every regard. Anna answers the phone and sets up appointments. Wes, who owns the company, is on the job working, and makes sure the customer is pleased. The entire team is very responsive, on time, friendly and thorough.

Description of Work
Deep cleaning of tile and grout throughout our home. Painting chipped tiles with matching color.

It went great! Wes, the owner, was very responsible to all our concerns. My husband was very particular and he worked on the floor to give it the shine we wanted. Wes indicated he would come back if we later found any additional areas which might need touchup. There were and he was true to his word. We have found in the past with other companies that it was a major hassle to get them to return. We appreciated all the effort and work of this company.

I had just spent a small fortune having an Italian porcelain tile floor put down throughout my entire house, and had 'epoxy grout' used because of my animals, etc. The tile layer did a beautiful job laying the tile, however, he did not properly clean the 'epoxy grout residue' as he was grouting the floor (I have come to learn that epoxy grout is very difficult to work with) and consequently a day later, it became apparent that I had this 'cloudy' film or haze all over my tile floor that I could not get up. I called my tile guy who came back with a small cleaning crew and promised to fix it. The next day it was evident that they were not successful - the floor looked just as bad as before. I researched and bought and tried every cleaner that was suggested would work, but nothing made my floor look 'clean' -- I was devasted thinking that I had just spent all this money on what should have been a beautiful floor - but instead, I had a floor that looked dull and dirty. I checked out Angie's List to see if anyone could help and within a very short time, Wes and Anna from Great Finishes reached out to me -- and it was on a Saturday! Wes offered to come out that same day and look at my floors to see what the situation was and see if he could help. He arrived as scheduled and was very familiar with my problem. Wes took a lot of time explaining what the problem was, how it happened and what steps he would take to remedy it. He even got his samples of the cleaners he would use, and hand cleaned a section to show me what it would look like when he was finished. He then took measurements and promised an estimate later that evening, which I received. The price was very reasonable for the amount of work that needed to be done. We set up a date for the cleaning. Wes and his crew showed up on time and completed the job within a few hours. I found two small areas (in over 2000 sq ft) that were missed and needed some additional 'cleaning' (different lighting/time of day shows things differently) and called Wes, who came right back the next day and corrected it, no problem. I would highly recommend Great Finishes for any flooring problems -- they are prompt, very knowledgeable, experienced, honest and very reasonable. Thanks to Great Finishes I finally have my 'dream floor' that I've always wanted!!

They did an excellent job, very friendly, punctual, d paid attention to every detail. Will definitely hire them again.

They were very professional, organized, punctual, accommodating coming out to give an estimate and complete the job both on weekends. The job was done to my total satisfaction and they followed up to insure I was happy with the job. I will definitely recommend them and absolutely use them, again.

Excellent Work! Everything about the job was great: quality of work, professionalism, promptness, attention to cleanliness and detail, careful when moving furniture, knowledge of materials used, thoroughness of estimate and the price quoted. Wes Clark and his experienced crew were the best, and I would use them again and highly recommend them. It's like we have a new floor!

The cleaning person washed marble floors with water and vinegar and it left etching areas all over the floor. Wes and his crew saved the day by repairing and polishing the floor. In addition to making the floor look like new, Wes and his crew delivered top-notch customer service and total job satisfaction. Our experience with Great Finishes was extremely positive, and we highly recommend them.