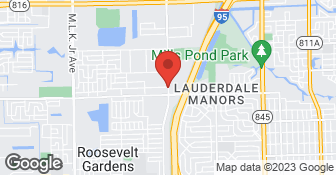 He spent a lot of time explaining everything to me and outlining my options. He was really honest, and told me I would be better off getting a self help test. He only charged me for the service call, and he was so honest and helpful I was able to take care of it myself without incurring any additional expense.

Description of Work
He came out and did a visual inspection on where I thought I was having a problem.

I got three estimates for mold remediation and construction (replacing drywall, new shower and bathroom tile, and painting etc.) This company was more than three times the price of the company that I used. After preparing a detailed estimate, I never received a follow-up call.

Description of Work
There were no services performed because I found another contractor who did the needed work for 1/3 of the price.

Until the ozone treatment, everything went well. The representative from the company was personable, and he explained everything clearly. But trying to get the ozone treatment became a problem. Everyone from the company seemed too "laid back" to get the work done. I can't really complain because it's been six months or so, and the mold has not returned. But I would have preferred a more punctual, more professionally aggressive move to get the work done at an earlier date.

Description of Work
A representative came to the house to explain the services. I accepted the $300.00 testing fee, and the tests were performed the the same day. The tests took about an hour. About a week later, test results arrived by email. The company suggested an ozone treatment for $300.00. About a month later, this treatment was performed.

Truly professional! They were on time, completed the work in a clean manner, and most of all, finished quickly! QUALITY WORK! A gem in a business of dirty work.

They are an extremely competent and knowledgeable team. Polite and sent me very quick and comprehensive reports about my problem for my insurance company. I could not be more pleased.

Description of Work
I sustained extensive damage last hurricane season, which took me a while to repair. Afterwards I noticed that I seemed to be becoming ill more often, I was diagnosed with a mold allergy although there was no mold in my home or office. I called AAALB Environmental and they did some tests and determined that I had mold growth in my walls. I also hired them to do the mold removal also.

Carpet and tile cleaning. upholstery, mattress and pillows cleaning. We guarantee your satisfaction and we won’t leave until the job is done right. We pride ourselves on the quality work we provide, while delivering great customer service! Check out our services offered and call or click to schedule a free estimate today.  …

How is ALB ENVIRONMENTAL overall rated?

ALB ENVIRONMENTAL is currently rated 4.7 overall out of 5.

No, ALB ENVIRONMENTAL does not offer free project estimates.

No, ALB ENVIRONMENTAL does not offer eco-friendly accreditations.

No, ALB ENVIRONMENTAL does not offer a senior discount.

Are warranties offered by ALB ENVIRONMENTAL?

No, ALB ENVIRONMENTAL does not offer warranties.

What services does ALB ENVIRONMENTAL offer?