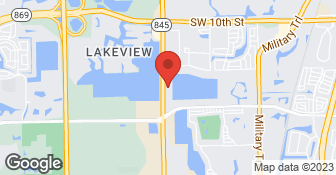 Sanhez Painting has been committed not only to providing out-standing results on every job we undertake but also on demonstrating exemplary customer service at every stage of our relationship with you. From initial inquiries regarding interior or exterior painting and pressure washing through to the completion of the job and post-completion checks to ensure that everything has been completed to your satisfaction, we strive to give you the courteous, professional and skilled service you deserve.  …

We specialize in installing residential and commercial wallpaper  …

Drywall finish Painting Framing We have been in the remodeling industry for over 8 years, we moved from Dallas to florida and we'd like to provide you the best costumer service experience and impeccable work.  …

Description of Work
I contracted with AIG in June of 2013 to redo my kitchen and master bathroom. I later added work to change out my floor tile and update my other two bathrooms. Although the work began the first week of October 2013 and I was promised my house back by the second week in December 2013, it wasn't until the 17th of July 2014 that I finally got my house back, and over a year after work began on my house, AIG--Closet Factory/Motor Trend Garage given that the AIG name is no longer used by the Closet Factory--still has work to do on my house. Although I've contacted the company representative (Jared) repeatedly, I continue to wait for the Closet Factory to finish the work that they began more than a year ago on my house. The actual workers weren't the problem, the problem were those put in charge of managing the project, who I realized almost immediately upon beginning the work on my house were not up to the task and didn't really know or care about what they were doing. My salesperson/designer, Frank, misrepresented the company and made promises that were nothing more than smoke and mirrors. He assured my wife and I that we would have certain items in our kitchen cabinets that in the end were never incorporated into the original design, and therefore were never incorporated into the finished product. I don't know how good or bad the Closet Factory is building closets and or closet related products, but if they operate anything like AIG operate, I'd caution prospective customers to do their homework, and ask for multiple references, something that I didn't do, before contracting with this company. I also highly recommend that unlike me, that prospective buyers ask for everything in writing and meticulously detailed in order to avoid misunderstandings and or heartache. I blame myself for blindly trusting my salesperson Frank, and for not requiring that everything we discussed and that changes made to the original design be documented and reviewed prior to signing the original contract, which really didn't look like a contract at all--I initialed off on original drawings and this became the contract--in an effort to minimize misunderstandings and arguments in the long run. I have to admit that Mr. Steve Newman, company owner, and Ms. Elia Alvarez, designer, worked diligently to make and otherwise nightmarish experience tolerable. At 58 I have to say that this has been my worst experience ever. I just hope that Mr. Newman will honor the original agreement and will have his personnel come back to my house in the very near future to finish what still remains to be done.

We went into remodeling our kitchen knowing that there would be a few glitches along the way. However, starting with the promise of one installation start date & then finding out that they would be delayed about 3 weeks later, things went downhill from there. Tear out went ok, done in one day, that same crew never came back to our house. That particular crew damaged my kitchen window by putting a ...

Description of Work
They installed a brand new kitchen, but we had purchased all appliances elsewhere.

We recently used AIG to renovate our master bathroom. The initial experience started off very positively but slowly went downhill fast. My biggest issues were with our designer Silvia. Initially she would return all calls and texts promptly but then mid way thru the experience getting an answer from her in a timely manner was like pulling teeth, if we ever got a response at all. I had better luck ...

It was good. He was above our budget. He was not too high but he was not too low either. The guy was extremely nice.We actually went to his office to get the estimate and he explained everything to us.

Description of Work
We got an estimate from AIG Interiors Group on kitchen remodeling.