The A/C Guy of Tampa Bay 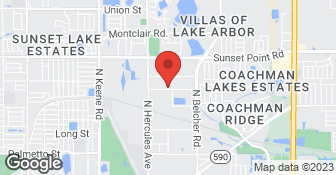 A Small Family run full service heating and air conditioning business that focuses on high quality work at an affordable price. Our specialty is top notch system installations and replacements with the highest level of quality available yet at a price well below the average. We have a 100% money back guarantee that covers everything we do. Basically if your not completely satisfied you don't pay!...

Their practice is unacceptable. Awful company

A few problems during installation but in the end GREAT! EXCELLENT SERVICE!!

The workmanship was the worse I have ever seen. They cut holes for the vents too large, did not put screws in both sides of the vents. Broke a 5 inch piece of sheet rock from one vent edge. The explanation given was " we told you there would be a gap". I guess that was supposed to make the mess okay. They did not replace the access door in the garage.

Please enter what you would like the response to look like:Mr. [Member Name Removed], I'm so sorry you had this experience. I do believe though that you have us mixed up with another company. We have no record of any customers under your name or address. There is another company in the area that has mimicked our name and we have received numerous calls before from their customers mistaking us for them. They sadly have been complaints like yours. Please call me at [phone number removed] and I will do what I can to help you get them to resolve your issues. Thanks, Gregg
5.0

Absolutely top notch service! We had a 16 seer Franklin/Goodman AC system installed several weeks ago. The owner Greg is a man of integrity, and the install crew were pleasant and efficient. This is a family business and everyone from the office girls to the crew are helpful, friendly and accommodating! Deserve more than 5 stars! Prices can't be beat! Very pleased!

Awesome! The owner himself came to provide a written estimate, and they were by far the highest quality for the lowest cost. Their team of 3 installers arrived promptly at 7:30am and finished by the end of the day at 5pm. They were efficient, professional, and courteous, and I had running AC! I highly recommend this company! I would give them 10 stars if I could!

Discussed a number of different units/options and staff responded to all the questions we had. Once selected, the new system was installed in days.

I was specifically looking for a small company rather than one of the larger ones, as I have found them to be much more on the ball. I definitely got this with the A/C Guy, having interaction not only with Greg (owner) but two daughters and a son! I had already had a quote from three other companies. Greg's quote was not only significantly lower, but it allowed me to up the spec to 16 SEER which qualified me for a $300 tax credit. The brand chosen (my choice) doesn't have a great reputation, but this is probably because they are one of the few that sell to the general public, i.e. to a bunch of amateurs and/or cowboys who don't really know what they are doing! The internals are mostly the same from manufacturer to manufacturer. The installation started at 8 and they were through just after 1PM. Everything was left neat and tidy. The code inspector found one minor wrinkle (I think he was anxious to find at least one thing wrong!) but commented that otherwise the installation was very professional. The problem was fixed in a few minutes the next day. The new air handler has variable speed, which means that for most of the time we don't even notice when the system is running. We had yet another mild winter (only one night of frost), and we haven't seen a summer yet, but I am confident that the system is more than ready for it. I have already recommended the A/C Guy to one of my work colleagues.

Went very well. My concern is always that the Technician will recommend a new system or some expensive repair. He had some suggestions for maintenance to make the system last as long as possible. I find this refreshing and stress free.

It is so nice to have a professional service provider who does what they say and with a smile.

Description of Work
Once again Gregg and Tabitha saved the day. We realized that our thermostat was out late on Saturday night. I called Tabitha Sunday morning at 9:00 am. She promised Gregg would be here between 1:00-4:00 pm on the same day. Sure enough he arrived on time and had the A/C repaired in less than an house.

I have been using the A/C Guy of Tampa Bay for a number of years to do all of my A/C servicing. Gregg alerted me early on to the substantial corrosion of my A/C unit, but it took about 4 years before the system finally began to leak. Gregg diagnosed the problem and then put in more Freon so that I would get some cooling over the holiday weekend. He charged for this service, but then reduced the cost of my new system by this amount. As an independent company, Gregg offered me many options for a replacement system. After a little on-line research, I selected one that I thought was best for my situation. And, we scheduled an installation date. The Freon leak, which had been very slow, accelerated and I was without A/C again and so Gregg moved up the agreed to date for the new A/C installation. Gregg and his crew showed up promptly at 8:00 AM on the day of installation (as scheduled). They had the new system operational a little after noon. They cleaned up after themselves and I am now sitting once again in air conditioned comfort.

New clients receive a FREE service call with paid repairs! D&W Air Conditioning is a family owned and operated business with a main office located in Sarasota, Florida and a sub-office located in Palm Harbor, Florida. We have been in business since 2000 and currently operate with 13 employees. All workers are employed by us and we do not sub out any work done. We are a certified state air conditioning contractor working under license # CAC1815573. We use both flat-rate pricing so you know what you will be paying before the work has been commenced. We offer Trane Products for new residential and commercial installation. Discounted service rates are available to Angie's list members.  …

We offer quality service at an affordable price. Contact us today about an estimate! Military and Senior Discount of 5%.  …

How is The A/C Guy of Tampa Bay overall rated?

The A/C Guy of Tampa Bay is currently rated 4.5 overall out of 5.

What days are The A/C Guy of Tampa Bay open?

The A/C Guy of Tampa Bay is open:

Does The A/C Guy of Tampa Bay offer free estimates?

Does The A/C Guy of Tampa Bay offer eco-friendly accreditations?

Does The A/C Guy of Tampa Bay offer a senior discount?

No, The A/C Guy of Tampa Bay does not offer a senior discount.

Does The A/C Guy of Tampa Bay offer emergency services?

Are warranties offered by The A/C Guy of Tampa Bay?

What services does The A/C Guy of Tampa Bay offer?