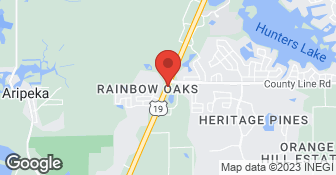 Description of Work
Mechanically removed ~3000 sq ft of flooring including tile and wood. Work was completed in less than two days including disposal.

The air scrubber was brought in, but not left on as he told my mold tester, Al Rabin, who had found very high levels of mold in two walls and in the attic. Marlon replied that it was just moldy air, so he never suited up and had my bathroom open in that room by the next day. They were several hours late due to another job in the area, he said. Later he told me I had to pay him $55 travel time plus $55 per hour EACH for both he and his helper despite the estimate saying it was just $55 per hour. As they were only there two hours the first day and three hours the second day (gone by 5 p.m. when I returned home), I objected to the $1,187.98 charge for just five hours of work, no hazardous waste removal, $160 for two days of scrubber use that was not used and using most of my own supplies--paint and paneling. He said I had to pay for fuel for his travel in addition to the hour non-existant "travel time" and that since I had agreed to the estimate, I had to pay all the charges in spite of just five hours as opposed to the 22 hours listed. His father is the president of the company and just as argumentative as the son. I had to hang up on both of them. I have a witness to that conversation with the son, Marlon, who had come out to my home and gave me such ridiculous reasons as to why he would not charge any less. Since the wall looked so badly after I got home with them gone--bulged out the lower half due to foam sprayed in to stop outside air, and about 24 square feet of non-matching texture higher than the rest of the wall, a cracked outlet and brown goo coming out one corner, he returned to "fix" these things the next day. He used the entire large can of texture spray I had bought to cover 70 sq ft for heavy texture in that one 24 ft area and left it for me to paint since it had to dry. His father said he was surprised he tried to fix my wall at all; he definitely should have left it open and told me to hire my handyman which is what I had to do anyway. His father said they do not keep receipts for materials. Neither man was willing to reduce those over-inflated charges for work not done.

Description of Work
Marlon moved some paneling from my closet to try to repair a water-damaged wall. He also foamed around a few electric boxes that were open to the elements and causing moldy air to be trapped in the wall. He arrived late in the day and had to return the following day, then come back one more time to fix a cracked outlet and some areas needing touch up. He left it to dry for me to paint another time. The wall simply did not look right. I hired someone else and resent his overly high charges.

He spent two hours the first day, three hours the next day, and another hour a few days later trying to fix things. It did not look good. I finally hired another man to fix the wall and blend the repair not to look so patched. The foam he used had swollen a large section of wall lower down which he managed to kick in, but still showed. I was rather appalled that he charged me so much money when he originally said it would be $55 per hour, then insisted I pay the entire written estimate even though there was no mold, and he did not have to suit up. That nearly $1,300 was supposed to have included removing mold from the attic and two walls, which he said did not have any. He mentioned travel charges, but I never heard of more than $600 for travel! I had to pay another $78 at Home Depot for more paint, texture spray, paint trays, rollers, etc. It then cost me another $100 for a different company to make the wall right. Marlen was very nice, but the charges are just too wrong for me to make this review any better. I was also very unhappy with the results. He should have wet sanded it down and been able to do the right texture.

Description of Work
Marlen replaced a section of insulation and moved some paneling to repair damaged wall. He also foamed around a few electric boxes that were open to the elements and causing moldy air to be trapped in the wall. He arrived late in the day and had to return the following day, then come back one more time to fix a cracked outlet and some areas needing touch up. He left it to dry for me to paint another time. The wall simply did not look right. I hired someone else amd resent his overly high charges.

[member name removed] called the office several times after her initial appointment and estimate from Marlon. She and I spoke in reference to some repairs after the initial work was done, however there was never any mention from her about inflated costs of any kind. I am sorry that she "resents" the costs, but I wonder if she feels the same way about doctor's visits, gasoline and the grocery store. Since [member name removed] has posted a negative review twice for the same service, I will continue to respond further on her next review.
5.0

I called AAA Cleaning Team to remove the water and remediate the mold that had just started. They arrived within an hour and cleaned the water. They then set up driers to dry the air and carpet. Some mold had started to form, so they cleaned and sanitized my entire house. Their fast actions prevented additional damage.

Description of Work
Came home from vacation to find my house partly flooded due to a broken washing machine hose.

We specialize in home remodeling and servicing all home repair needs. Our company has been servicing the Bay Area for the past five years and we are proud to say our company has sustained a 5 star review rating. We have an outstanding team of staff that stays in communication with the home owner to assure the work is being done properly and in a timely manner. Our staff consist of our CEO, Office Manager, General Manager, Sales Executive, Sub Coordinator, Project Manager and Deputy, Permit Technician and Production Team. We look forward to serving you and helping making your house a home.  …

Apex Wipe is a revolutionary cleaning business started by a group of like-minded people that came together to provide a service that makes an impact and encourages people to spend quality time together with their loved ones in clean and pristine environments. We are a cleaning business driven by our values to provide trustworthy and reliable service that is second to none. Simply put – we handle it all for you and are here to make living easier by adopting better cleaning practices. Taking care of cleaning your upholstery and flooring is definitely a struggle for everyone, but having a professional service to do that job for you ensures you start your day on a good note. Set out with a core mission: the way we serve must be good for our clients, our employees, and equally for our community.  …

Proudly painting Pinellas County since 1997. Angie's List business since 2006. Sunrise Quality Painting has been offering high, top quality painting and experienced painters. We paint interior/exterior of residential, commercial, and rental properties. We also offer wallpapering, wallpaper removal, popcorn removal, pressure cleaning, roof cleaning, Stucco repair, Gutter repair and replacement, Carpentry repair and woodwork, Drywall repairs, baseboards, crown molding, and other handyman services. No job is too small for our company. Insured and bonded. 10% discount for all Angie's List members. Please give us a call to set up an appointment at 727-744-3232  …

AAA Cleaning Team Inc is currently rated 3.3 overall out of 5.

No, AAA Cleaning Team Inc does not offer eco-friendly accreditations.

No, AAA Cleaning Team Inc does not offer a senior discount.