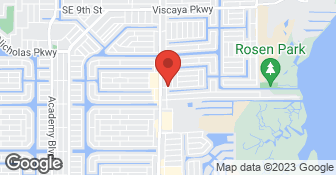 We offer free estimates for all repairs. Whole House Reverse Osmosis is one of our specialties and we work on all brands of well and pool equipment. We are an authorized Hayward Warranty Center. We hold a Florida Swimming Pool Contractor License #CPC1456632 and offer Swimming Pool Leak Detection and Repair. We have been in business for 14 years in Lee County....

Johnethan at Water Medic came immediately after we called and quickly diagnosed that the ants caused the contacts in the well pressure switch to melt. Johnethan began right away to repair the damage and the water system was restored. Been using Water Medic for ten years, as they provide immediate service.

Water Medic Is the best! Service was on the same day, tech was professional and went out of his way to make sure it was the right fix. THANK YOU COLT!

Excellent; exceeded my expectations. Water Medic is extremely competitive on their price and they stand by their work. Brian and Darel have been very professional, we are very satisfied with the price and the work they have done. We highly recommend them.

Water Medic is one of the best companies we have ever dealt with and they have the best people. Both Tony who initially showed up to evaluate our problem and Justin who did the repair are fantastic. They are courteous, helpful and knowledgeable. Dealing with Watermedic as a company is unbelievable. They are honest, have really fair prices, are conscientious and are very service oriented. Love doing business with them. Thank you all at Watermedic!

It's been going very well. I don't even have to be here when they do the work. They are very reliable and I always recommend them to anyone looking for a pool service company.

Description of Work
I've been using them every Monday since 2014.

Thank you very much for the compliment! Rich Jackson President
5.0

Fantastic. Was installed with in 6 hours of them coming out to diagnose the issue.

Description of Work
Needed a new well pump and switch

Hey [Member Name Removed], glad to hear we got out there quickly, and got your water back on!!
1.0

Very dissatisfied! I felt they took advantage of my lack of knowledge of the well system as they replaced a pump twice in a period of a three year time. They also replaced numerous parts costing me thousands of dollars. Once I called another company for a second opinion, who diagnosed the problem as a bad air tank. This tank was the same tank that was on my system that water medics had serviced during that period of time, of which they did not replace, however replaced every other part instead. To add insult to my poor experience, when I called the office and spoke with the dispatch the young girl was extremely rude, her tone condescending and she argued with me continuously making me feel that I was stupid and that I did not know what I was talking about. However, the new water service company who portrayed professionalism and confidence in their knowledge of the well system had explained to me exactly was NOT done right previously so therefore the knowledge I was trying to discuss was a professional opinion, not my opinion in which she argued with. I would encourage anyone using water medics to also get a second opinion before allowing them to service your water system.

Colt did the installation and the new unit eliminated the hydrogen sulfide smell. System was tuned up with optimal pressure in the pressure tanks and now operates like new. Highly recommend Water Medic for all your water needs/problems.

I called Water Medic last week to see if they could replace the filters in my R/O system. The system is a Culligan system and they told me that they could not get filters for Culligan systems as they are proprietary. I was able to find some replacement filters on Amazon and ordered them. I set up an appointment with Water Medic to come out and replace them. An appointment was set up for 8/2/2016 between 12:00 and 2:00 pm. Jeremy arrived at 12:45 pm and examined my system. He told me that the tank was no longer any good and would need to be replaced. As the system was 8 years old, I decided to replace the whole thing for a cost of $520. I didn't want to spend the money but the taste quality of the City water in Cape Coral Fl is so poor that I decided I needed to do it. It took Jeremy a couple of hours to install the new system which included 2 new faucets. He was very thorough and did a meticulous job. It's good to have great tasting water again. I would definitely recommend Water Medic for this type of service.

Glad to hear that [Member Name Removed]!! We know there are a lot of under the sick RO systems out there, but none with the level of service that we provide. Thanks!!
5.0

Jeremy arrived as scheduled, changed all the filters and sanitized the system. The entire process took about 2 hours. He also tested the water from our water softener. Everything was fine.

Description of Work
Water Medic has been servicing our Reverse Osmosis water system for the past 5 years. They inspect the system, change all the filters, and make certain everything is running well. We have also had them do emergency repairs when the main water pipe from the well broke.

We are a landscaping company based in Fort Myers devoted to making your lawn the best it can be. Characterized for looking at the details, our company has a reputation for satisfying the needs of our customers. Whether you need general lawn care, plant installation, landscape installation, or land clearance we can assure you that any job we do will be done with quality and detail. Visit our Landscaping website for more information - www.envisionlandscapingco.com Visit our Sod installation website for sod information - https://www.sodfortmyers.com  …

How is Water Medic Of Cape Coral overall rated?

Water Medic Of Cape Coral is currently rated 4.9 overall out of 5.

What days are Water Medic Of Cape Coral open?

What payment options does Water Medic Of Cape Coral provide

Does Water Medic Of Cape Coral offer a senior discount?

No, Water Medic Of Cape Coral does not offer a senior discount.

Are warranties offered by Water Medic Of Cape Coral?

What services does Water Medic Of Cape Coral offer?