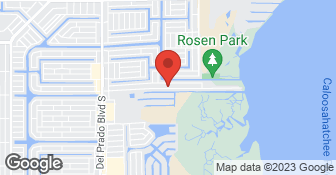 He came out the same day I phoned in. I like to help a person running a company on their own rather than dealing with the larger companies. He asked in advance which model I had and came with the part. It took about fifteen minutes and he was in and out. I'd definitely contact him again for any other repairs.

Came out to repair a very old washing machine. He found unrepairable. He recommended that I purchase another used model like what I had.

They are very responsive to customer wishes.

Description of Work
Washing machine was not working properly

Description of Work
Great provider. Cost was due to the expense of a part we needed. Highly recommend!

Description of Work
The owner Don is a nice but talks way too much! I thought a service call would take a few days to schedule. It was actually weeks. He had several personal health issues to contend with. Frustrated that I waited weeks for a service call only to be told that the appliance as too costly to repair.

Went fine - the only issue is the wait for the service. When a provider is really good they are really busy and sometimes (especially when it is not an emergency situation such as refrigerator not working at all) it may take a while but it is worth the wait. We had an unusual problem - a bottle of boost had gotten stuck in the mechanism that drives the ice into the dispenser. It was quickly discovered by Dr. Don and fixed. He also looked over the rest of the fridge to make sure it was working properly and the settings were correct. All in all in was a great experience.

When I called the Appliance Doctor, Don, had just gotten out of surgery, but called me back and said that he would be getting a helper and would come over and take care of my washing machine. I had just moved and was not sure why the door was not locking. He told me he would order the part after I told him the problem and that he would be scheduling me within the week or as soon as possible. He then called and said that he was having more problems with his surgery but still asked me to go over the washing machine problem with me on the phone. He realized how I could fix it by myself and that he did not need to come and make a service call. He was amazing, polite, and as if he was your neighbor next door. He is also very knowledgable about appliance repair and I will be referring him to anyone who is looking for appliance repair. I actually wish I could have met him because he was so concerned and such a nice man. Thank you Don, you were a lifesaver!

Description of Work
Fix my problem over the phone

Arrived for the first call - tried an inexpensive solution. Had to order a part...came back a week later and installed it.

Description of Work
Replaced the GE Valve that controls the flow to ice maker and water on the door...as water pressure had dropped

We called Don to repair a leak coming from my washing machine. He responded quickly to the message I left for him. He said he had a special class the following day, and that he would get to us later that day if possible. If his class took up the entire day, he would come the next morning. (His class, by the way, was a special training update on repairing the most modern appliances.) He called that afternoon, and he arrived later the same day to repair the machine. We had given him the exact make and model number in advance. When he arrived and checked the machine, he already had everything he needed to repair it. It is an older Maytag so my worry was that he would tell me it was too old to get parts for it. But, NO! He said it was a great, well-made washing machine--better than most new ones--and we should keep it as long as possible. He identified the source of the leak and found a couple of other small problems that would eventually turn into big problems. He repaired all of them. In addition to his excellent repair work, he gave me advice on the reliance of other appliances that I will be purchasing in the future. I will be re-doing my own kitchen in about a year and will be buying appliances with the fewest possible bells and whistles. I also own two rental units on a small island where there are no technicians to repair my appliances. His advice was perfect for both situations. i will recheck with him before I actually make those purchases. So, in a nutshell, Don stays up-to-date on all aspects of care/repair of all appliances. He obviously knows what he is doing, and he does it very well and very efficiently. He is prepared to repair your particular appliance when he arrives. ( YOU be sure to give him the make and model number of your appliance in advance when you contact him!) He is polite, prompt, and keeps you informed of his expected arrival. He is personable--friendly. His rates are very reasonable. What more can anybody ask?!

Description of Work
Don, the Appliance Doctor, repaired a leak that had just begun to flow from my washing machine. That's why I called him. He also repaired a couple of other problems-to-be before they became one. He showed me what he was replacing, and there was no question that the further repairs were necessary.

What can I say? Came when called, did his job correctly, wrote the bill. Reasonable charge.

He was helpful and explained everything well.

My dryer stopped working the weekend before Christmas and the day before I was traveling out of town. I called APPLIANCE DOCTOR and the next day had a technician out to my house to fix the problem. The problem was quickly solved and I paid remotely.

Description of Work
Fixed the electrical switch in my dryer

my dryer had been making an annoying noise, it was cleaned, and the noise it was making (caused by a penny), was repaired, the noise stopped.

A service call is around $75 + any repairs needed. I think they are very reasonable. They are always respectful of my home, polite, and super-fast. They usually come the next day after we call.

Description of Work
They came out and repaired an issue with our washer. The washer was overfilling. They did a great job and explained our options really well. They also looked at our ice maker in our refrigerator and again, they were very open and honest with us. They said it wasn't worth it to fix because that product is known to have continuous issues so they saved us money.

Dan charged me for the and quot;Service calland quot;. It took almost two weeks for him to finally show up since he had been sick (and still was when he came). We also played phone tag repeatedly. But Dan was always trying to be available until we eventually got together and got the job done.

Description of Work
Fix the dishwasher unplugging the drainage hose from a garbage disposal recently installed.

They did a great job and my washing machine is working great now. I did think the price was a little high for what they had to fix it seemed like a minor item to me.

Description of Work
They repaired by washing machine.

He was polite and informative.

Description of Work
Looked at dishwasher that was making steam go under the kitchen countertop and he said it was working correctly to get one with vents on the bottom so steam does not go under the countertop. Our other problem was a dryer that was not drying. He went on roof and the vent was plugged due to wasp nest. Who would have known. I was satisfied with my service call.

Appliance Doctor came, was reliable, and did the job.

Description of Work
Appliance Doctor worked on our air conditioner, refrigerator, and stove.

Very professional and patient. Nice to deal with and did a good job. Definitely would call again.

Pleased with the work that was performed. The technician went over what the problem in plain English. He also showed me how to clean the dust off the scream that collects dust at the bottom of the refrigerator.

He is sweet and so honest. We had a refrigerator that he said wasn't worth repairing and he didn't even charge us to look at it. He could have really taken us. He's my guy for appliance repair.

Description of Work
I used Appliance Doctor to switch everything for my washer and dryer because when the front loaders were installed, the doors knocked together. He noticed it before I did. He switched them out and cleaned the vents and cleaned inside the washer and dryer. He vacuumed when he took the back off the dryer. He also replaced a mounted light that had fried completely through over the microwave and replaced the wiring.

We give you options for solving your electrical problem & provide you with an exact price on how much it will cost to the penny. Then, upon receiving your approval we will start the work immediately & finish it the same day in most cases. All repairs are guaranteed. If an electrical repair fails during normal use in the three (3) years we will either repair or replace the item at no charge to you. Your complete satisfaction with our electricians & electrical repairs is 100% guaranteed.  …

Bates Electric, Inc. has more than 20 years of experience providing electrical services in Fort Myers, Naples, and surrounding communities. Whether you need a residential, industrial, or commercial electrician, our electricians have the training, equipment, and expertise to handle your project with total customer satisfaction.  …

Insured
All statements concerning insurance, licenses, and bonds are informational only, and are self-reported. Since insurance, licenses and bonds can expire and can be cancelled, homeowners should always check such information for themselves.To find more licensing information for your state, visit our Find Licensing Requirements page.
General Information
Free Estimates
Ask for Details
Eco-Friendly Accreditations
No
Payment Options
Check
Warranties
Satisfaction

How is Appliance Doctor overall rated?

Appliance Doctor is currently rated 4.9 overall out of 5.

What days are Appliance Doctor open?

No, Appliance Doctor does not offer eco-friendly accreditations.

Are warranties offered by Appliance Doctor?

No, Appliance Doctor does not offer warranties.

What services does Appliance Doctor offer?