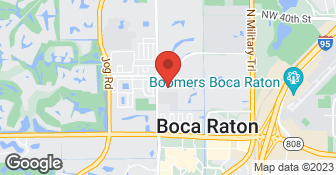 Encore Garage Door is a firefighter owned and operated company serving Broward and Palm Beach Counties. We are a team of dedicated professionals that perform repair service on most makes and models of garage doors, as well as electric motors. Our highly trained technicians will give you the advice you need and the best customer service. We believe in the straight forward approach with no hidden fees or gimmicks. We also service rolling steel doors,fire doors and truck trailer doors.Remember to ask about our unbeatable warranty on service....

Description of Work
The garage door would not open.

Perfectly. I have used this company for garage door repairs (springs and garage door opener replacement) and have always been statisfied with the what was done and the price

Excellent. I would highly recommend Encore to anyone who is in need of a new garage door or any repairs needed to their garage door. Very professional.

The technician arrived on time and diagnosed the problem quickly. The work was performed in about and hour and a half. They replaced the garage door opener, reprogrammed all of our remotes and cleaned everything up and hauled away the old equipment. We would highly reccomend Encore Garage Door.

Description of Work
Replaced the garage door opener, reprogrammed all of our remotes, tuned up our garage door and replaced 2 lift springs.

The service was great! They did a very good job. They were professional with their task.

Description of Work
They installed a new garage door.

Everything was fine. I would consider using them agin.

Description of Work
They helped re align the door, fixed the remote control, and installed a key pad.

We found Encore Garage Door through an internet search before joining Angie's List. We called two companies to get estimates on replacing our garage door (16x7). We called on a Friday, and they called back on Saturday morning on a holiday weekend. We thought that was great service. They answered all of our questions and gave us an estimate that was much lower than we expected to pay. The owner, Chris, came out on Tuesday morning to take a look and get information for the permit. We waited about a week and a half to hear back from them that the permit cleared. We set up an appointment for a few days later. One of the workers arrived first and on time, but had to wait for the other one to finish up somewhere else, so he did some work, but also had to sit and wait some. Once the second person came, the work moved pretty quickly. They took out the old door and finished installing the new door and motor in about 3 hours. My only complaint is that the workers left behind some trash from their lunches. But they did great work, quickly and at a good price. I would use them again.

Description of Work
Replaced a 16' x 7' garage door, with insulation, and installed a garage door opener motor with two remotes and a wall button.

Dear Member Thank you for taking the time to write a review.

He did an excellent job was very professional.

They did a good job. I have been very happy with them. They were very professional and very efficient. The price was right. I think they were referred by a friend. I always try to do business with local people.

Description of Work
I used Encore Garage Door to replace an old wooden door and upgrade it to a hurricane garage door which is required by the county now.

The Florida Garage Door Company offers a complete line of high quality Garage Doors, Openers, Parts, and Accessories by major brand names. Our technicians are experts in there field and work is warrantied. We happily of suggestions on the right parts and cost effective methods to repair or replace your door. Any questions you may have we will gladly answer to help you make a decision. Some of our products offered are listed below. All doors provided by Florida Garage Door Company are hurricane tested and meet or exceed hurricane code. Florida Garage Door Company is independently owned and operated locally. We provide weekend and after hours appointments when its convenient for you. Please see our discounts and specials as we always strive to keep our prices low and workmanship high. Our trained and experienced technicians can work on any and all makes and models of garage doors and openers, including new doors, new garage openers or service your existing garage door. The Florida Garage Door Company is licensed and insured providing warranties on all products and services. You can learn more about our products and services offered on our website. Please call today to schedule a appointment. We look forward to making you a satisfied customer .  …

Allied Doors has been family owned and operated since 1966! We specialize in garage door and garage door opener installation and repair. At Allied Doors we pride ourselves on our customer service!!  …

Bonded
Insured
All statements concerning insurance, licenses, and bonds are informational only, and are self-reported. Since insurance, licenses and bonds can expire and can be cancelled, homeowners should always check such information for themselves.To find more licensing information for your state, visit our Find Licensing Requirements page.
General Information
Free Estimates
Yes
Eco-Friendly Accreditations
No
Payment Options
Check, Visa, MasterCard
Senior Discount
No
Warranties
Ask for details

Repair Service or Replacement of Garage Doors and Electric Openers.

No, ENCORE GARAGE DOOR CO. INC. does not offer a senior discount.

No, ENCORE GARAGE DOOR CO. INC. does not offer warranties.

Are there any services ENCORE GARAGE DOOR CO. INC. does not offer?