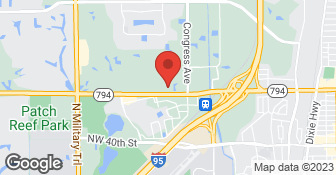 American Residential Warranty (ARW) is nationally recognized as a leading innovator in the Home Protection services industry, and our focus on outstanding service and customer satisfaction is a core part of our success. With years of Home warranty experience and top tier partners we are able provide top quality service to homeowners throughout the country. Additional DBA - American Protection Plans LLC. Additional email - customer_service@americanrw.com, sales@americanrw.com, jbrauser@arwplans.com, rebecca@arwplans.com. Additional phone - (866) 572-4192....

I contracted the services of this company with the total coverage plan for my air conditioning and appliances, I did not see the real reviews before contracting and for two years I was paying on time and they don't want fixed my AC. Just said that I get $500.00 and that I fixed it by myself. It's the worts company.

Description of Work
Fixed my AC

was great experience. on time and saved me lot of money. Company they used was great.

Description of Work
Hvac and plumbing

Description of Work
to have my microwave replace , that caught on fire

It hasn't & I'm still dealing with them. We have a mold problem in the crawlspace under the house, that doesn't have anything to do with them but while myself and the mold inspector was down there found a leaking toilet. ARW said I had to pay plumber $390 up front and they would send me a check for $225. Since I live from paycheck to paycheck I told the plumber to leave, this was on July 14th, said they would send the check anyway which I haven't received. Also our Hot Water Heater stopped working before July 14th, I pushed the rest button and for now we do have Hot Water, same plumber said it could go anytime. Problem is the upper & low thermostat needs to be replaced. As of this writing they are still reviewing it and I was told they will probably send me a check for $175 which I haven't received. Our dishwasher started leaking at the same time and they said they are sending me a check for $215 which I haven't received. The agreement says that there is a $500 limit on each appliance or repair which I agreed to. They are using the excuse that since these appliances and systems are over 15 years old it is not cost effective to repair them. I pointed out that there is nothing in the agreement that says anything about the age of the appliances. Might as well have been speaking to a wall. Bottom line I can fix the toilet myself for less then a $10 part I bought and I have to get it fixed before the mold remediation can start. The money between the 3 checks I'm supposed to received will pay for a new dishwasher but what's left over will be no where near enough to repair much less replace the hot water heater..we are just lucky it's working for now and have no working dishwasher. On top of all this for each service call I had to pay $55 3 times on a charge card for a total of $165 and we still have nothing. If I had the money to pay a lawyer I'd look into suing them for breach of contract but on the other hand if I had money for a lawyer I wouldn't need a home warranty as I could afford to pay for these things to be fixed or replaced as they break and they know people that get these home warranty's do so because they don't have money to just pay to fix/replace something when it breaks. I pay these people $55 a month and have been for over 2 years and it is supposed to cover with a $500 limit everything except the washer/dryer and the Air Conditioning/Heating system. Customer service is lousy..don't do business with these people as if you need them you will most likely regret it. I certainly do and will be cancelling with them shortly and looking for another Home Warranty Company.

They would not fix it there they said the gas line to the furnace was NOT part of the furnace. Go figure. So I had Dr Fix IT come in and replace the gas line.

Description of Work
Gas line to furnace had a leak. Need replaced.

I have four properties and have had American Residential Warranty for years for peace of mind. However, this past year, there were three times I really needed them and things went south quickly. Most recently, my water heater broke and needed to be replaced. ARW advertises that if they can't fix it, they will replace it. That does not happen. I asked them about that multiple times and they only said they would send a payout because of limited liability to repair units. We went back and forth and ARW sent a plumber eventually - but we are going on three weeks now without a water heater. The payout was about 1/3 of what it actually is costing me to fix the system. The plumber estimated $3800 - so the warranty company said that they were sending me a payout check and wished me luck. At my home in Norfolk, I did not have my account number handy when my A/C was having zoning issues. So they told me the account had been cancelled. That was impossible because they had just taken payment. I had to get a company out to fix the A/C for $7000 - but when I got back home and spoke to ARW, they said they did not have the opportunity to have their company take a look, so I could not get reimbursed at all. For my home in RI, the furnace went out last year, but I did not have the account number handy when I took the trip. We called ARW and they said our account expired - I told them they just took payment and it was the same story - they refused to help and when I got back to Virginia and found my account number, the $9000 job had been done by a company I hired, so they refused to assist again. I think if I had just put $400 away each month instead of paying ARW, I could have paid these out of that escrow account. Beware of this company!

Terrible, the tech was paid 55 to show up. He attempted repair and charged us another 125. They determined not repairable and that it would be replaced. So they let us know they only cover the first 500 of the devices value. They then offered us a check for Max value minus the techs "repair" attempt.

several things they are expensive and pay out very little

They are okay but don't seem real organized. I have no particular complaint other than I wanted to know who they sent out on my first call and they did not know.

Description of Work
This is a monthly contract situation. When I need home repairs they set it up with a local repair person.

The only repair that got done without a fight was the dishwasher repair. The heating repair for a thermostat control relay switch in a zone valve was rejected. Central AC coil, not covered. AC coolant not covered. The AC repair company they sent me, I learn later, ripped me off on the price. You're much better off hiring your own repair services.

Central Appliance Repair LLC was incorporated in 2013. We provide repair services on major household appliances within the capital region of New York and South Florida. Those appliances include Refrigerators, Ovens, Ranges, Washing Machines, Dishwashers, Dryers and Freezers. Our technicians are highly trained and duly qualified. There level of professionalism is second to none. We offer excellent service with excellent prices. Senior citizens and veterans benefit from our discounts. Call us today for all your appliance repair needs at 786-575-1747.  …

**Think Spring: $85 dryer vent clean out and ask us about our newly added Duct Cleaning Services***Your reliable Air Conditioning, Appliance and Plumbing service provider. Serving S. Florida since 2005. Gives us a call for all your service and repair needs.  …

Problem Solvers USA, LLC, is locally owned and operated, with more than 14 years of industry experience. We work with you every step of the way to give you the service you deserve. We service all major brands.  …

American Residential Warranty is currently rated 3.2 overall out of 5.

No, American Residential Warranty does not offer free project estimates.

No, American Residential Warranty does not offer eco-friendly accreditations.

No, American Residential Warranty does not offer a senior discount.