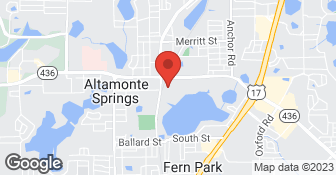 IQ Painters is a residential and commercial painting contractor based in Orlando Florida and serving all of Central Florida from Kissimmee to Orlando to Lake Mary and beyond. Licensed and insured, we are dependable, professional, courteous and punctual. We boast a two year quality guarantee and use top industry products exclusively for exceptional performance and long lasting quality....

Nate and his team were great to work with. Provided excellent results at a fair and reasonable price and in a very timely manner. I would definitely hire them again for future work.

It went great! Nate always gets back to you right away and is extremely professional and courteous. The painters were in and out so fast, much faster than I expected and did a great job.

They did a wonderful job! From start to finish, we couldn't have been more pleased. We would IQ again anytime we need painting services.

Description of Work
We needed the entire exterior of our house to be painted a new color.

From the first call to the last inspection, Nate was very courteous and professional. He provided an estimate very quickly and had very good follow-up, even providing me with information about the paint that would be used to complete the job. Due to scheduling, we were out of town when the painters completed the service, but our house sitter said that there were no problems. When we returned, our home was finished and looked great! There were no debris left behind at all. We would recommend IQ Painters without hesitation. Our job was quite large and they handled it nicely, and at a fair price.

Description of Work
Paint exterior of our home.

IQ Painters painted our house a couple of weeks before and did a great job so we decided to have them do the pavers too. I had already pressure washed the pavers so that reduced the price a bit. They were punctual, rolled on the sealer and finished in a few hours. It took 5 gallons of Seal King paver stone sealer. The pavers look great!

Description of Work
Sealed ~1000 sqft of pavers around our pool

We were very happy with the job they did. Nate handled the whole project from the initial estimate to making sure the painters understood everything that was to be done and the final walk down with me. He is very knowledgeable and professional and easy to work with. Same goes for the painters. The project took right at 7 days to complete with two painters. The only negative thing that we noticed a couple days after the job was done is some paint drips on the balcony and stairs. If we could do it all over again, the only thing we'd do differently is to emphasis keeping paint drips off the floors and to more closely inspect the floors. Other than that, IQ Painters will be at the top of our list for any future painting jobs.

Description of Work
We hired IQ Painters to paint our house exterior and a few rooms inside. We had them do everything from the body, trim, eaves, balcony railings, light fixtures, ceiling fans, back porch deck, pool band & retaining wall, seawall, the boat dock and stain the porch ceilings and front doors.

SHOWED UP ON SCHEDULE, CAREFULLY PAINTED ALL AREAS, CLEANED UP WHEN FINISHED

Description of Work
PAINTED ALL TRIM ON HOUSE, PAINTED DOCK AND BOATHOUSE

Nate, the owner is very customer friendly. He and his team will work relentlessly to satisfy you. The professional layout of Nate's written proposal gives you an idea of what to expect. Although he got confused over some very basic instructions which I clearly articulated, it all turned out well in the end. The two-man crew who worked on my house were perfectionists and friendly. If I had to have guys painting inside of my house, I would choose them.

I am a returning customer for IQ painters. Nate and his team painted my old house about 2 years ago and did a phenomenal job. When I closed on my new house a month ago, the first thing I did was gave Nate a call to schedule a paint job for my new house. As expected, the house looks fantastic! Nate took the time out of his busy Saturday to come and do an estimate, and was there at exactly the time he said he was going to be. A week later, the painting team came out to start the job. They took a full day to meticulously clean and prep the area, and took the next day and a half to paint. After the job was done, we did a walkdown of the job and made sure I was satisfied before they left. The painters did an excellent job, and Nate's professionalism is second to none. I have highly recommended IQ Painters to friends and family, and when the time comes I would hire them again in a heartbeat.

I needed to get this small job done quickly. It took 5 days from my initial phone call to job completion which I was thrilled. The quality of work, organization of the work, punctualitu are outstanding and professional. Nate inspected the work before turnover to me. Jose did an excellent job.

They did a really great job and I liked it and they were willing to patch up any areas.

Description of Work
Exterior painting. They did painting of the whole house

Nate and team did a nice job painting the front of our house. I would use them again.

Thank you very much for your review and business. Nate & Team.
5.0

Description of Work
Nate, delivered as promised. Very punctual and careful to get it right the first time. Transformed our home on the inside and outside into a very nice new look. Extremely satisfied. Strongly recommend!

Never returned my calls for a quote, guess they didnt need the work.

Description of Work
no work done.

Hello (Member name removed), I am surprised by your review. I provided an estimate to you but, you chose another painter. We tried to earn your business and I did follow up with you. Sorry things didn't work out. Nate Managing Partner IQ Painters
5.0

We had a great experience with Nate and his crew at IQ Painters. I initially spoke to several painters while evaluating different options. Nate was very pleasant to deal with, and he quickly worked me into his schedule for an appointment and estimate the following day. He arrived on time, was professional and courteous, and made several helpful suggestions concerning our job. IQ's price was very competitive, and he included some additional prep work at no charge, as well as informing me of a promo they were running that I wasn't aware of, thus bringing the price down even further. Nate provided a printed quote on the spot from his mobile office, and addressed every question that I had (which was quite a few). After considering all of the painters that we'd spoken to, we chose IQ, and fortunately they were able to work us into the schedule for the following week. We were offered our choice of Sherwin Williams or PPG/Porter paints, and Nate explained what his personal preferences were, but stressed that we could choose whichever we liked. We visited the showroom to choose our colors, provided the paint codes to Nate, and he handled the rest. The crew arrived very punctually on the scheduled day, and immediately went to work. Nate arrived with them on the first morning to meet me, explain the steps of the process, and to deliver the paint and supplies. Between the time that he'd been onsite for the quote, and the time that the work was performed, I'd decided to take down one wall of a screen enclosure that was being replaced. This left a line of heavy rubber sealant running all the way around one end of our lanai. I'd planned to remove it myself before painting, but I underestimated how difficult it would be to get it off. Although this meant extra work for his crew, Nate handled the situation with understanding, and assured me that they could take care of it. I did pay a small (and reasonable) amount for the added time and materials, but his guys did a great job and there's no evidence that it was ever there. They also handled some other special requests that I had without complaint. The entire job was completed in two full days, and a few hours on the morning of the third. Nate arrived as the crew was close to completion to inspect the job himself. I'd previously noticed a few very minor details where touchup was needed and had planned to address those, but he performed his own walkaround first and had all of those corrected before I even said anything. When the job was complete we walked the house together to review it, and I was given the opportunity to point out anything else that I wanted to address, but they'd already taken care of everything. Only after he was certain I was satisfied, did Nate mark the job as complete. He was able to take a credit card payment and print (as well as email) me a receipt on the spot. His crew cleaned up after themselves, and when they left there was no sign that they'd been there. Overall we were very happy with the experience, and would certainly use IQ Painters for future jobs. A big thanks to Nate and the crew!

Description of Work
Exterior pressure washing, filling of holes and cracks in stucco, priming and painting of house, trim, soffits, and gutters.

Thank you, we appreciate your review and business. nate

SoftWash-it treats and maintains all exterior non-landscape surfaces of your property. We provide exceptional cleaning, restoration, and preservation services for all types of roofs, pavers, concrete, siding, stucco, fences, and screen rooms.  …

T and D specializes in exterior house cleaning such as roofs, driveways and all 4 corners of your house. We guarantee your satisfaction, and we won't leave until the job is done right. We pride ourselves on the quality work we provide, while delivering great customer service! We also will include 1 vehicle wash for free with any service order!  …

How is IQ Painters overall rated?

IQ Painters is currently rated 5 overall out of 5.

What days are IQ Painters open?

No, IQ Painters does not offer a senior discount.

Are warranties offered by IQ Painters?

What services does IQ Painters offer?

Are there any services IQ Painters does not offer?