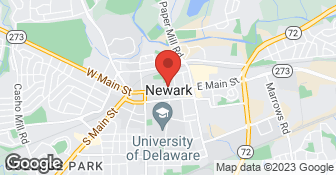 Let's start with the roof. There were sagging sections of plywood that I asked him to replace because, well, they sagged and looked awful! He did not do that in an effort to "save me money." I am trying to sell the house now, and no one wants to buy it because they look at that sagging section of roof and think it will leak. He also made the drip edge so large that water shoots right over the rain gutters. I had to remove the leaf guards after I finally figured out that his drip edge was too great, and the combo of that and the leaf guards made the water just pour directly over the edge. He never figured that out. He said I would have to install some sort of upright block to stop the rain from overshooting the guttter, despite the fact that the gutters had caught the rain just fine for the previous 10 years. He also left roofing nails all around the house. On day one, he and his crew arrived a half an hour after another company started delivering the shingles. So he had to move the shingles to another spot since they were in the way. Wasted half a day of work. His crew seemed young and inexperienced, and he yelled at them a lot. He had also delayed starting my job. I had first contacted him in May about doing the roof. Well, by the time he was 'free' to start my job, the price of shingles had skyrocketed with the price of oil so my estimate went up, and it was 100 degress out! The bathroom was another story. A pipe had burst in the kitchen above the bathroom, so there was water damage to the ceiling and one wall. I had wanted to update the window in the bathroom anyhow and this seemed like a good time. It was a small basement sized window, set into the cement foundation of the house. The window does not leak, but it is not square and is difficult to open and close. He also removed the wainscotting from all four walls of the basement, even though when we had discussed it he said he was only going to remove it from two walls that had water damage. He also drywalled over the pipe access panel to the bathtub. And so it bows out a good inch and a half becuase the pipes need that room; nevertheless he drywalled over them, and I will have to cut open the wall if I ever have to access those pipes again. Not very smart. He talks a good game, but I think he is winging it.

They are superb. Marty Frost, the proprietor, is extremely honorable, diligent, and does top quality work. He does everything in the construction and builds houses from ground up, now he is busy with repairing and remodeling work. He told me ceramic tiles were his specialty. The storm windows that he replaced were superb. He sometimes might have to take off for a day or two but he will always follow through and always goes out of his way to finish up. He came back after the windows were installed to give me a replacement on the lower pane for the upstairs bathroom because he didn’t like the way the first one fit; at no extra charges. The water damage rehabilitation is in process now and the windows were put in a year and a half ago. We haven’t estimated out the sum of it, however he gave me an estimate of $1700 for rehabilitating the kitchen, that includes putting in a fire ceiling, putting in a selection of light fixtures, and repainting. In the bathroom, we didn’t know the tile would have to be ploughed up so he hasn’t priced that job yet and he has to install a new vanity too. Marty did an excellent job with the sliding glass doors. He recommended something based upon our requirement that was a little different from what we thought we needed, but it really suits the job much better and we are extremely happy with that. I am also planning to have him reinstall the tiles of the backsplash in our kitchen one of these days. He also does ripping and gutter work. He is like a general handyman but he has much more skills than a general handyman has. His workers that he recruits are well-qualified people and are trustworthy. On the windows, he gave us ideas and worked with a local manufacturer for first two grade levels because the turnaround time for their production was faster. The better quality door that we wanted had to be manufactured in Canada but it was from the same company and that was good. He always cleans up the messes, totally. As a matter of fact, he went out of his way, when he put the new window in the dining room. He doesn’t just cut and reinsert, he takes the siding off and reinserts as if it was a brand new installation because otherwise it wouldn't be as good a job and will always wind up with leaks later. He found that the manufacturer that built the house originally, did poor installation, the siding was rotting away, and I didn’t know this, so he replaced that wood as long as he was there. It was a nominal amount; I think he only charged for the wood. Before he does extra things that are necessary, he always verifies it with me first. He is very honest, trustworthy, and professional. He is always neat and clean. He is extremely strict; he is ex-military so he carries himself well. One might find a cheaper contractor but one will not find a contractor that is any better. We need more windows replaced and we will certainly use him.

Description of Work
I used Aesop's Gables Inc to have our basement windows replaced. They redid the sliding glass doors. They are now doing our water damage cleanup and reconstruction.