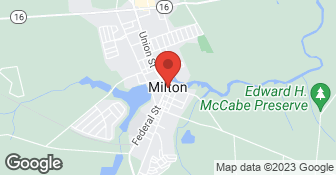 At George Sherman going above and beyond for our customers isn't a slogan it is in the heart of every employee. Our goal is to provide every customer with remarkable service that exceeds their expectations. We employ only the most qualified plumbing and HVAC technicians and we are committed to their ongoing education and training keeping them up to date on their skills, current trends and certifications. Additional address - P.O. Box 326 Milton, DE 19968. Family owned. Additional email - harold@gscnet.net....

Never returned our emails or calls.

We have been using Sherman for 3 years. We like them because they are very local in Milton, besides being thorough and competent. Our previous vendor was in Millsboro. While not the other side of the moon, they were usually a little tardy as we are on the fringe of their geography. The stated cost is of an annual contract, which also provides for priority for emergencies and discounted repair parts

I was billed $357 for a after hours service call that nothing was repaired and Shermans diagnosis was incorrect. I asked why wasn’t the issue ( something wrong with heat system making an odor of gas,) wasnt fixed, and was told that I called the wrong entity of shermans and that I needed to call the repair department. When I asked who came out, they said it was only to check for leaks. Duh, that’s stating the obvious. The “tech” said that it was a leaky valve. The next day I had an HVAC tech come out to address the issue. Because there was still an odor in the house, the first thing he said was “this isn’t a raw propane gas odor, it’s an exhaust odor”, he checked the exhaust pipe for the furnace which ran under the house in the crawl space and exited out through the foundation under our back porch. He immediately saw the pipe had separated at a coupling and determined that was the source of the burnt propane gas odor. So he reglued the coupling, checked the other connections and all was repaired, no more problems. There were no problems with the gas valve at the furnace as reported by the Sherman’s leak testers. After going back and forth with shermans they adjusted the bill to $200 and wouldn’t take any responsibility for their lack of and incorrect service, when I offered $100 they said they would terminate my propane service. IS THIS A COMPANY THAT YOU WOULD WANT TO BUSINESS WITH? THEY TAKE NO RESPONSIBILITY FOR THEIR MISTAKES AND PASS THE CHARGES ONTO THEIR CUSTOMERS!

Plumber replaced disposal in less than 1/2 hr. so did not accrue large hourly charge. Did a good job, left the kitchen clean. I will definitely use again.

Very nice installer. On time.great to deal with.

Turned out the gas valve on the furnace was defective. The tech did not have one on his truck, but went away to a local supply house, got the new valve, and had it installed in a little over an hour. Was very impressed with responsiveness and professionalism. We used them again at the beginning of cooling season to tune-up the central air conditioning. We're pleased with their work, and will be calling upon them again as needed.

Description of Work
Furnace would not heat. Late Friday afternoon, on a holiday weekend. First three vendors I called went straight to voicemail. Sherman picked up, and dispatched a truck within the hour.

Arrived on time. Job was complete in less than an hour.

Description of Work
Leaking hot water joint behind the wall in bedroom closet.

I’ve had a lot of experience with them. I use them all the time. They are the best in the area.

Description of Work
I use Sherman for heating and A/C services. They do air conditioning, plumbing and heating.

I’ve had a lot of experience with them. I use them all the time. They are the best in the area.

Description of Work
I use Sherman for heating and A/C services. They do air conditioning, plumbing and heating.

Victory Electric, based in Sussex County Delaware, is a family owned company with big ideas and small company values. We service all residential electrical needs throughout Delaware. With pride, we commit to providing quality service, reliability, transparency and respect to both our clients and our team members. With experience and a drive to stay up to date on innovative home solutions, you can depend on us to bring Victory to any situation. We are readily available to help you with your current and future electrical needs. Our company values Honesty, Family, Integrity, and Respect. Victory offers emergency electrical repair for new and current customers. We offer free quotes, and many years of experience. If you are ready for a Victory, Call us at 302- Outlet-0 (302- 688-5380) or to schedule online, click the button below, fill in your email. Current customers will be directed to scheduling, new customers can fill out a quick “New Request” form, from there you can get directly forwarded to our schedule. Thank you for your time, and all of your current, and future business.  …

George Sherman Corp is currently rated 4.7 overall out of 5.

No, George Sherman Corp does not offer eco-friendly accreditations.

No, George Sherman Corp does not offer a senior discount.