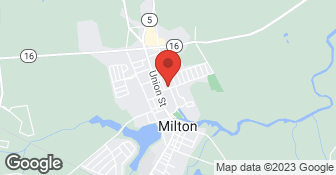 Dr. Energy Saver Delaware is your prescription for lower energy bills® in Delaware & Eastern Maryland. We have helped hundreds of homeowners improve their homes comfort and health by making their homes more efficient. Our comprehensive home energy efficiency solutions are customized to fit your specific needs. From window replacement, home insulation and air conditioning (heating, cooling, and ventilation) to air sealing, attic insulation, water heaters and furnace maintenance, repair, and replacement. If you're serious about comfort and health in your home don't take a chance on singular solutions. Your family and your home deserve a total home performance efficiency plan! By evaluating your home's systems, Dr. Energy Saver Delaware can help to ensure that you're getting the best results....

Description of Work
sealing up a crawlspace

Description of Work
Blow in insulation!! They didn't get the job had a local company do job for $1700

Description of Work
Placed a length of duct work on the dehumidifer in the crawl space.

When we called the representative was very diligent and punctual when coming out explaining everything. It was an initial good impression. However, they do subcontract the work out and we were not happy with it. We had some heating and a/c issues and inspected the work closely and there was still air loss in the ventilation system in the attic. We would not call them back out.

Description of Work
Sealed duct work in the attic

We had Dr. Energy Saver (DES) out to the house in fall/winter of 2012 to discuss the job. We had several visits with several staff, as our house was an atypical job. Unfortunately we had to postpone the job until the spring of 2013, due to cash flow. In Spring, we had them out again, several times. The owner came out, the sales person came out. The project manager came out. At EACH AND EVERY meeting (fall and spring), we suggested that they have someone come out to the house to practice removing one of the panels so they would know exactly what was involved. They never took us up on the offer. On the first day of the job, the carpenters showed up on the job and told us that they had been contracted for only one day to remove all the panels (a physical impossibility). We had previously been told they would be retained for a week, then three days - then, of course, they were only contracted for a single day. One of the carpenters told us he was the brother in law of the owner and that this was a repeating pattern of D.E.S. trying to get more work from the carpenters than was paid for. The carpenters left that day and never returned - after removing 6 full panels and 6 partial panels. We were told that D.E.S. was working on finding other carpenters and work continued on the lower walls of the house with the cellulose. We called the salesperson and asked the workers that were on the job repeatedly what was happening with the carpenter situation and when we could expect work to resume. We were told that it was being worked out and not to worry about it. After a week we called to speak to the owners and were told that they were out of state for a week. After we got hold of the sales person, he told us that there was no plan to contract with other carpenters and that it was now OUR responsibility to find carpenters to remove the panels if we wanted DES to install the foam insulation - in complete violation of the contract. When we tried repeatedly to talk to the owners of the company after there trip, we were told they were either at a job site or in a meeting or otherwise unavailable to talk to us. The first communication we received from the owners after this complete failure to perform was a letter saying that they were not refunding any of our deposit ($5,400) - in consideration for "work completed". The accounting of events presented in the letter reflects either a complete break with reality or a completely cynical attempt to cover their a**** with revisionist history. I guess they do not think it will cost us anything to replace the ceiling panels they dismantled and left piled on our floor. They left all 12 full/partial panels off the wall and the wall open to foam insulation. They did not even finish all the areas of cellulose insulation. We have pictures to prove it. The bottom line is that I have never dealt with a less professional organization, that took less responsibility for their own failing to perform and that refused to even discuss the failure with the customer. They talked a good game up front, but completely failed to deliver on 95% of the job, but charged us for 20% of the job. We will probably be seeing them in small claims court soon. DO NOT DO BUSINESS with this company. I cannot believe they are on the list of recommended vendors for the State of Delaware energy programs and will be filing a complaint with the State as well. If you do business with them, be sure to tape every single conversation with them.

Description of Work
The contract was for removing the interior tongue and groove panels from our geodesic dome home, removing the fiberglass insulation, spraying 3" of closed cell foam, and replacing the interior panels. Also, they were to place dense pack blown cellulose in the vertical knee walls.

They were very nice & lovely to deal with but their estimates were off the charts. We found a much better price elsewhere.

Description of Work
We got an estimate for a mold issue in our home & a crawlspace encapsulation because of a mildew issue.

Dr. Energy Saver offers a Price Assurance Guarantee that ensures our customers that their energy retrofit project will the lowest price available for the work specified. If the customer receives a quote for less with a contractor that offers the same standard of materials, quality, and work of equal specifications our company will match the price plus $100 with a written estimate.

Description of Work
The first time the job was not done in the proper fashion. I called the office, and the Supervisor was not in at the time. He called me back to find out what the problem was with the job. I indicated that what my contract stated was not what they performed on the job. The Supervisor came out the very next day to check out the situation. He agreed to what I spoke to him about. I was pleased to see the quick response. The following day he sent out his workers to rectify the situation. On the this accord, I would recommend the company to others.

Family Run? CHECK! A+ BBB Rated? CHECK! Lifetime Warranty? CHECK! Free Eval & Inspection? CHECK! 20 Years of basement expertise and the owner visits every job! Think ADAM BASEMENT if you need 1.) Waterproofing or French Drains installed 2.) The water out! 3.) Safe, legal egress installed 4.) Foundation repairs 5.) Crawlspace encapsulation. Drying up your wet basement is the first step towards a clean and healthy room ready for living, storage, and play. Let us turn your wet basement into a comfortable room suitable for your family. We have 19 years of basement waterproofing experience and 9 years Egress windows experience. We service DE and Southern PA. We are the top Egress Window installer in the area, with hundreds of windows installed. And since we are a waterproofing co., We know how to keep them from leaking. We provide experienced skilled workers who take pride in their workmanship, performed in a timely and CLEAN manner. We have provided services in hundreds of residential homes, as well as in industrial and commercial buildings. Our goal is to provide reliable, professional, and ethical service to our customers at a very reasonable price.  …

We take great pride in being family owned and operated. Our mission is to provide our customers with exceptional service while delivering top-notch quality. Our reputation is based on the service and quality we provide, as well as the safety of our customers and their homes. We strive for transparency throughout your entire experience with our company and as well, promise to be upfront and honest. We treat your home like our home. Call us today for Better Service, Better Price, Better Value!  …

We are service professionals! As licensed contractors and specialists in the field of heating and air conditioning, we have the tools, the equipment, and the experience to keep your equipment running smoothly all year long. If it is emergency service that you need, twenty-four hours a day, seven days a week, we are available to assist you! To help reduce service emergencies, we offer service agreements to keep your comfort system running at peak performance. As a Bryant® dealer, with a wide variety of products to choose from, we can keep your family healthy and feeling comfortable all year long. We carry a complete line of indoor comfort equipment with innovations that raise the standards of comfort and reliability, including air conditioners, heat pumps, gas furnaces, programmable thermostats, humidifiers, ductless split systems, geothermal systems, boilers, air cleaners, ultra violet lights, ventilators and zoning products. Let the experts at Mikes HVAC, LLC help you customize a solution that's right for you.  …

Dr Energy Saver is currently rated 2.6 overall out of 5.

No, Dr Energy Saver does not offer a senior discount.