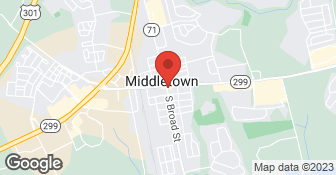 Haas was just the sweetest man, knocked it out before the deadline. It wasn't easy, drove countless times down to Dover for paperwork and he took care of it.

I just bought a house in Middletown. Hans, the owner of Delaware Septic was referred to me by my realtor to do inspection on septic tank. it started with Hans being 2 hours late for the inspection. He then told us right away that he cannot pump the tank and would have to get back there the next morning. He pulled the lids of the holding tank and D box and right away failed both. He saw cracks at top of both boxes. He asked for payment in full and said he would return at 9 am to pump and finish inspection. Id like to note that he cashed my check that day without giving me any receipt because he would have the report done the following morning. My realtor and I met at 9 am the next morning and waited for Hans for 2 hours. He never showed nor did he answer his phone. 3 days later we found out that Hans just showed up at the house and started digging the caps out again. (no one knows why). When the current home owner came out and asked him what he was doing he told her to mind her business and go inside. I called Hans many times and never got a response. A week later the report showed up in an email. He failed both the box and holding tank. The tank was never pumped and it says on the first page of the report that it has to be pumped to be valid. The last page of the report says it has to be completed within 72 hours of start to be valid. The sellers realtor saw that and would not allow us to use that report. I had to get another inspection through Weaver and they passed the holding tank because the cracks were only at the top of the tank. Hans did not know how far they went because he never pumped. I then had 2 completely different reports of the same tank so I then had to get Scott involved. He is the person responsible for a septic reports validity. He works for dnrec. After another week he got to the bottom of the mess. Turns out that Delaware Septic uses weaver to pump out tanks. They could not get there when we were told. We were never informed Hans was supposed to call and return my money, which he did not.

Description of Work
Hans was supposed to give me a septic inspection...

First he showed up an hour and a half late. Then, without pumping out the tank, he immediately failed the system which is against DNREC guidelines. He said the cover was cracked and he saw some cracking at the top. We had a second opinion come in and they told us that the tank was repairable and should not have failed. But our biggest gripe about Hans was that he was trying to sell us the work as he inspected. That is a major conflict of interests. We went with another company and saved thousands of dollars.

Description of Work
Hans from Delaware Septic came out to our home to do an inspection on behalf of our buyers.

We take great pride in being family owned and operated. Our mission is to provide our customers with exceptional service while delivering top-notch quality. Our reputation is based on the service and quality we provide, as well as the safety of our customers and their homes. We strive for transparency throughout your entire experience with our company and as well, promise to be upfront and honest. We treat your home like our home. Call us today for Better Service, Better Price, Better Value!  …

BedRock Siteworks was established in Chester County Pennsylvania in 2003. We provide excavating, stone base and concrete foundations, concrete driveways, retaining walls, and storm water management solutions. Working together as a team, we strive for quality, service, and integrity, both personally and professionally, making a positive difference for our clients and for everyone we touch. Our professional goal is to produce the very best services for our clients at an affordable price. Above all, we seek to develop enduring relationships. Our work is designed to function over the long term, as are our relationships with our customers. LOCATIONS WE SERVE: Chester county, Lancaster County and surrounding areas  …

How is Delaware Septic overall rated?

Delaware Septic is currently rated 2.3 overall out of 5.

No, Delaware Septic does not offer eco-friendly accreditations.

What services does Delaware Septic offer?