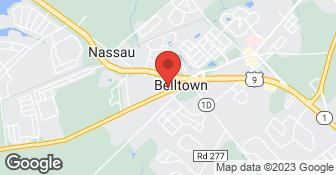 AROCON Roofing & Construction offers superior services at an affordable price because we are your Maryland contractor. Instead of focusing on completing as many jobs as possible, AROCON focuses on providing quality work and getting to know our customers. This allows us to provide high quality, customized results and unparalleled customer service without adding extensive overhead or expenses. For all of your Roofing & Construction needs, you can count on our experienced team at AROCON Roofing & Construction. We service all of Dorchester, Queen Annes, Talbot, Wicomico, and Worchester counties. Call us today to make Home Improvement, Simplified. #rooftuneup.  …

The contractor arrived at the designated time and was very professional. She said she needed to check with her architect before she could give us a fee quote, so we should expect to hear in about a week. We never heard from her again. We never received a fee quote.

Description of Work
This contractor came to our beach house and took measurements to move certain walls.

Provider was very responsive, punctual, professional, and friendly. He was very thorough. I did not hire him because his price was so much higher than others . I got five bids

Description of Work
Provider give me an estimate for a three seasons room and deck.

Very responsive. Even after the project was complete showed a willingness to come back and take care of any little follow-up items. also coordinated other vendors very well. For example, we had the lightning rods replaced. It was a very difficult project that took a long time. they managed the process and made sure the work was done.

Description of Work
Siding for a 4 story, 4 unit complex on the water. Plus replaced windows and doors

The jobs were done efficiently without any inconvenience to our household. They arrived as promised the day after I called.

Description of Work
I had two small jobs including attaching a dryer vent and putting a sliding door back on track.

One Call sent out two men that had NO idea how to measure the railings for the stairs, not to mention cutting the rails on an angle. The posts had to be cut in order to fit against the concrete steps, and looks horrible. The men were VERY unprofessional, and cussed and yelled so loudly that my neighbor came across the street to see if I was okay. When the men went to lunch, I called One Call and instructed the boss that the men were not to return to my property, so the job was not completed. The quality of the work was poor, and demonstrated a total lack of experience. The demeanor of the men was totally unprofessional, and not acceptable; at least not in my neighborhood. The boss showed up to see the work, and apologized for the unacceptable craftmanship. At this point, I did not have enough railing to correct the problem, because they had made so many incorrect cuts. He offered to send someone else out "Who knows what they're doing," but I told him he should have done that the first time. I will NEVER use One Call again!

Description of Work
I called One Call to install railing on my front porch and five steps up to the porch. I had custom ordered the railing, so I wanted it installed correctly.

They did a great job from start to finish. They took up all the VERY old carpet and cleaned and coated my hardwood floors. They were punctual, professional, and courteous. They even went a bit further than I asked and made thresholds for a couple of doors that needed them. They were very reasonably priced and for the work they did they were worth every penny.

He arrived on time, left to get supplies and returned quickly. He fixed three closet doors and the threshold on the front door.

Description of Work
A collection of repairs to several doors

On time-no problems whatsowever. Work product was excellent and finished on time by projected completion date. The new finish is much harder than what was on the engineered floors.

Description of Work
Removed tile in foyer and powder room, installed new unfinished red oak flooring to match kitchen/sunroom and sanded/refinished all to match. Floors look great! You would never know that they were not installed all at the same time! Bill also made some repairs on the old floor that are now indistinguishable. I am delighted with the quality of their work and punctuality. Any questions that I had prior to and during the process were responded to in a timely manner. I would hire them anytime. They have great handy man services too!

I was very happy with One Call Services, their personnel, professionalism, and finished workmanship.

Description of Work
One Call Services completed renovation and expansion of our front porch and added a roof extension after a car ran into the front of the house and destroyed much of the front of our home. They operated in a highly professional manner, on-time delivery and response times, total communications at all times, and extremely high attention to detail. I was delighted with the completed project as were all of our neighbors who witnessed the transformation. They not only did a great job on the renovation, but they discovered extensive termite damage from a previous infestation which they took care of and replaced all of the damaged wood and kept the costs to a minimum. All of this while dealing with permit delays but still managing to complete the job on time before our first renters took occupancy as this is also a rental property.