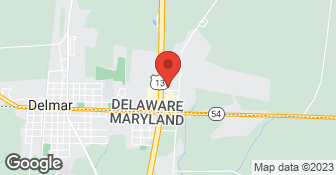 The results were excellent. A long problem area was resolved.

Not well. 2 bedrooms and 2 area rugs were completed in less than 20 minutes. Machinery being carried downstairs was dragged and took a chunk out of one of the stairs. When I looked at what had been done in the bedrooms, I found that nothing had been moved, nothing had been put up on foam blocks and it was a slip shod job at best. When I questioned the technician, he seemed rather astonished that this was questioned. Then he got an attitude. Then, while I was on the phone with corporate, he started yelling over what I was trying to ask. Then, I kicked him out of the house and told him I would call the police if he didn't get out now. Then, corporate sent a manager out from the Delmar office who "graciously" offered to take $22 off the price. Then, I disagreed with that generous offer. It ended up with the other technician redoing the job, the manager kind of laughing things off, me paying $40 less than the original price, ME having to sand and repaint my stairs and ME being quite disgusted with the whole situation. I felt it was a token gesture to even take $40 off. The manager did not seem to "get" that it was totally unacceptable for me to have to go through this to get a mediocre carpet cleaning done. I will NOT be yelled at in my own home by someone I have hired to do a job he didn't do. Not gonna happen.

They did a great job, guys were phenomenal. Very detailed oriented, they were able to clean on a holiday week with only a few days notice. Took about 3-4 hours.

They do a heck of a job. They're excellent!

Description of Work
I had three rooms cleaned.

They come when they say their coming. Carpet cleaning isn't exactly an urgent situation. One time it was, I spilled some red wine on a white carpet and I called them; they came right out.

Description of Work
I always use them.

It went well, as usual with this company.

Description of Work
Had wall to wall white carpet and porch carpet, as well as throw rugs cleaned.

Description of Work
They did carpet cleaning.

When booking the appointment online we selected the 12 - 5 window of time. Stanley Steemer sent an email to confirm our reservation and called us the following day to let us know that they would call on the day of the appointment to give us advance notice of their time of arrival. The day of the appointment they called us to give about an hour's notice of when they would arrive (2:30) and then arrived promptly on time. Stanely Steemer went through the original estimate and noted some changes that would be needed based upon the sizes of the rooms, both rooms that needed to count as two rooms but also rooms we had estimated as being larger than they were. Since we were just moving into the home, Stanley Steemer suggested applying a maintenance coat to all of our hardwood flooring before bringing in furniture to help protect the flooring and bring back some shine to the original hardwood floors. We elected to get the maintenance coat and are glad we did, although we didn't feel pressured and declined a few other potentially beneficial up-sells (such as cleaning the tile/linoleum floors in the kitchen and baths) with no trouble. Stanley Steemer showed us the amount of dirt they were able to remove from the flooring and gave us with directions for continued care.

Chris was prompt, responsive, friendly and explained each step before he did it. This was my first claim ever and I was nervous and cautious.

Description of Work
Stanley steamer was recommended through my insurance company liberty mutual to check damage from water seeping through my wood laminate floor. They were responsive and punctual. chris was professional and friendly and explained everything he was doing and why.

They do an excellent job. They moved my furniture, and put it on blocks. They go above and beyond.

Description of Work
They clean our carpets.

Called the main number for Stanley Steemer and requested an appointment to have my carpets cleaned. For the price I paid, it appeared that the service went very fast and the carpets did not smell clean after the service. I was expecting a nice fresh smell but rather the carpets smelled musty after a couple of days post carpet cleaning. I will need to have the carpets redone at some point.

I've used them forever. I used them when I was in Oklahoma too. It took them an hour to finish the work. They do a good job. The people who came are really friendly.

Description of Work
I use Stanley Steemer. They cleaned my carpets.

The floors were cleaned and protected. To date the protection seems to be working.

The technicians were very thorough. They did exactly what I expected, finished their work promptly and returned everything to its proper place. I will definitely use their service again.

Description of Work
Cleaned, deodorized carpets in 2 rooms of my apartment.

Great. They had to vacumn 2nd time on my request. And no problem from them.

They staff did an excellent job all around. They left the area like they found it and also removed a couple stains from the carpet. The carpets were very nice and clean when finished. It was good quality work. We tell friends about the company.

Description of Work
They cleaned my rugs.

We got them because they are local. We’ve used them a lot and we’ve never had any problems with them. That’s why we keep calling them. They have the general knowledge in the area that the other ones 5.12. They’ve always shown up on time. They explain what they’re doing and they answer our questions. We think their price is a rip off but it’s appropriate though. They are on a higher end, but they usually have deals and we wait until they have a deal. So what we pay is usually worth more. If we didn’t use their specials, they would be expensive. The quality is good. They do what they are supposed to do and they do it well. The particular company in Marlborough has always been fine. We will definitely use them again in the future. 7.01 to 7.02 units, and we have to get the carpets cleaned and we’re going to use Stanley Steemer.

Description of Work
We used Stanley Steemer. We have 2 rental units and we had to clean the carpets.

Called this am for any available appointments and was immediately accomodated. Jonathan Prendergast and Rick Gray were the crew members. Could not have asked for a more professional cleaning. Asked that most furniture be moved and they did as asked. Concentrated on problem high traffic areas. Great service and awesome timeliness given the large amount of area they had to cover. Great crew of professionals. Thanks so much

They do a fabulous job. I have recommended them to my neighbor as well and they have done a great job for them as well. I get the protection package and I think it works very well. They are a wonderful to company to work with.

Description of Work
They cleaned carpets and put protection on the carpets.

Description of Work
cleaned 8 by 10 carpet,bedroom,stairs and couch

The service went well. Two technicians came out and completed the job I about 2 hours. They were very friendly and made sure to tell me everything they were doing. They did some extra spot cleaning and scotch guarded carpets. The carpets looked great after the service. I had no problem scheduling the service and they were very flexible.

Description of Work
I hired the company to clean all of the carpets of my home.

We will never use Stanley Steemer again. Their service was unsatisfactory.

Description of Work
We used them several times to clean both wall to wall and area rugs. We thought we were happy until they refused to honor the price we paid before. I called another company that uses the same type of truck mounted equipment. What a huge difference between the two... The new guy picked up stains that Stanley Steemer said were permanent.

Good cleaning, prompt arrival. Moved furniture as needed and returned it to original location as needed.

They did a fantastic job! They moved my furniture and everything. Carpets look great!

Description of Work
They came out to clean my carpets.

The people that did the rug were excellent. They spot treated our old, soiled rugs. The rugs were not left wet. They put things under the chairs, couch, and tables.

Description of Work
They clean our carpets.

Baez Landscaping is a landscape/hardscaping company that specializes in lawn care and structure for residential and commercial properties. We have the experience and dedication to get the job done right! Specializing in Landscaping and Lawn Care services; We guarantee your satisfaction, and we won't leave until the job is done right. We pride ourselves on the quality work we provide, while delivering great customer service! Call or click for your FREE estimate today!  …

We have the experience and dedication to get the job done right! Specializing in pressure washing services; We guarantee your satisfaction, and we won't leave until the job is done right. We pride ourselves on the quality work we provide, while delivering great customer service! Call or click for your FREE estimate today!  …

Bonded
Insured
All statements concerning insurance, licenses, and bonds are informational only, and are self-reported. Since insurance, licenses and bonds can expire and can be cancelled, homeowners should always check such information for themselves.To find more licensing information for your state, visit our Find Licensing Requirements page.
General Information
Free Estimates
No
Eco-Friendly Accreditations
No
Payment Options
Check, Visa, MasterCard, American Express, Discover
Senior Discount
5%
Emergency Service
Yes
Warranties
No

How is Stanley Steemer overall rated?

Stanley Steemer is currently rated 4.5 overall out of 5.

What days are Stanley Steemer open?

No, Stanley Steemer does not offer free project estimates.

No, Stanley Steemer does not offer eco-friendly accreditations.

No, Stanley Steemer does not offer a senior discount.

Are warranties offered by Stanley Steemer?

No, Stanley Steemer does not offer warranties.

What services does Stanley Steemer offer?