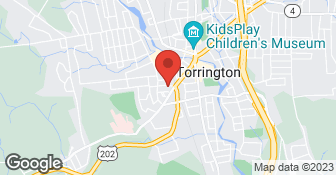 We started on October 6 and I was cooking dinner in my kitchen on Dec. 15 - right on schedule. In addition to the base scope that was written in the initial contract, there were a number of "while you are at it" items that were also completed in the same time frame. Paul coordinated with the other contractors based on a schedule we develped at the beginning. I had an architect develop the plans and there were times when key dimensions that Paul needed were not noted on the plans. Paul if incredibly detailed in terms of finish, so spent alot of time on the phone with the architect getting clarifications. If I was doing it again, I would have either a completely dimensioned set of drawings or a computer on site that Paul could pull up the CADD drawings. There were some details that needed to be worked out on site, and Paul would draft a detail and send it to me for approval. I was in the city during the week, so we depended on phone and photos taken from the phone to monitor progress. I came out on weekends and gave notes. The work was done on time and to a high level of quality. As I was acting as the GC, there were times when Paul had to adjust his preferred sequence to accomodate other work. We were always able to develop a work around that kept him moving without incurring additional costs. We had a written contract at the beginning with a schedule and fairly detailed scope. I arranged an account at the local lumber yard, so paid for all materials directly - no mark-up. I had all appliances delivered, and Paul moved them into place coordinating with the gas and electrical contractor as needed. I am thrilled with the product and can't believe it actually got done in the time and for the budget quoted.

Description of Work
The job was a total kitchen re-do, removal and replacement of (6) sliding doors and a window. The door replacement required the exterior wall to be re-framed and the siding to be removed and then patched and replaced. The kitchen was gutted down to the studs. I acted as GC and arranged for the electrical, plumbing and propane contractors. Artitectual Builders supplied all the carpentry, sheet rock, tile, window/door removal and replacement, demo and then finish trim. They also assembled and installed all of the IKEA cabinets. Painting was provided by others. Paul (Artitectual Builders owner) also built two custom shelf units.

Pro Painters provides full-service commercial and residential painting in Watertown, CT and the surrounding areas. Family owned and vastly experienced we provide a full range of services that improves the interior and exterior look of your home, or business  …

Star Painters LLC is a Painting service company in operation since 2005 in the Connecticut. Our areas of expertise is interior and exterior painting. When you work with Star Painters Contractors, you can trust that the job will be done right, the first time, every time. You will see the same crew and foreman throughout the project, and they’ll know your specifications start to finish. The job is not complete until you the customer are completely satisfied. Our crews are friendly, prompt and reliable. Our professional work will take years off the age of your home or business.  …

We are a family business with 9 years experience and with only happy costumers.  …

Insured
All statements concerning insurance, licenses, and bonds are informational only, and are self-reported. Since insurance, licenses and bonds can expire and can be cancelled, homeowners should always check such information for themselves.To find more licensing information for your state, visit our Find Licensing Requirements page.
All skilled traders and home improvement contractors operating in the State of Connecticut are required to be licensed or registered by the State Department of Consumer Protection. License or registration identification is required to be on all advertising, business cards, signage, and contracts. You can check to see if a contractor or tradesperson is licensed or registered by going to:https://www.elicense.ct.gov/
General Information
Free Estimates
Ask for Details
Eco-Friendly Accreditations
No
Payment Options
Check
Senior Discount
No
Warranties
Satisfaction

Home revitalization & design (AutoCAD) and custom fabrication. One stop shopping for interior remodels including framing, drywall, and trim and paint; as well as decks and additions, welding & construction. A company founded upon the realization of design motif.

Based on a large service area (I travel to the work), I will not be the best GC in the world.... you would need to hire appropriate Plumbers, Electricians and HVACS. Can do very basic things... but beyond that we should hire the appropriate professionals.

ARTitectual Builders LLC is currently rated 5 overall out of 5.

No, ARTitectual Builders LLC does not offer eco-friendly accreditations.

No, ARTitectual Builders LLC does not offer a senior discount.

No, ARTitectual Builders LLC does not offer warranties.

ARTitectual Builders LLC offers the following services: Home revitalization & design (AutoCAD) and custom fabrication. One stop shopping for interior remodels including framing, drywall, and trim and paint; as well as decks and additions, welding & construction. A company founded upon the realization of design motif.

Are there any services ARTitectual Builders LLC does not offer?

Based on a large service area (I travel to the work), I will not be the best GC in the world.... you would need to hire appropriate Plumbers, Electricians and HVACS. Can do very basic things... but beyond that we should hire the appropriate professionals.