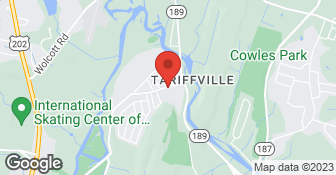 We are a family owned and operated business servicing all residential and comercial projects in the Farmington Valley since 1973....

Action Windows & Siding, LLC is home improvement/construction corporation organized with over 20 years in manufacturing, engineering and installing experience. Our extensive product line we have formed partnerships with over dozen of the leading manufacturers in our field. This allows us to offer an even larger selection in wood, vinyl, composite, aluminum and steel windows and doors.  …

Exteriors of CT, LLC takes great pride in the company’s experience, expertise, quality, and customer service that we as a team provide to meet our consumers' needs. It is our mission to provide excellent workmanship and total customer satisfaction from start to finish of every project. In order to understand the needs and expectations of our customers, we diligently work and communicate with every customer in a professional manner. Our reputation is based on dependability of service, safety, and quality, regardless of how large or small the job.  …

We employ family members, and do not use subcontractors to perform our work. Payment expected upon satisfactory completion of job.  …

Called for an estimate, owner shows up and throws out a number without getting up on the roof to see what the actual problem is. When I told him that it was going to be more involved he tells me he will send someone else to actually go up and take a look. No idea why someone would show up to give an estimate without intending to be thorough as this is a waste of my time. Sometime later I get voice mails from him and one of his employees with all the gloom and doom that they claim is my roof problems. But, I never actually saw anyone else. No one showed up and knocked at my door to ask permission to go up on the roof. Very unprofessional. Either they took it upon themselves to access my roof without asking me, or they made up an estimate without going up. I called and asked since I wasn't there to monitor, how do I know they didn't damage my roof? Owner gets all huffy, as expected. Not professional, even if I thought the estimate they gave was accurate, I would never hire a company that didn't have a basic understanding of what good customer service is. I would never just allow someone to come on to my property and wander around like that, it is very inappropriate and invasive. All the owner would say was that he told me someone else was going to come by to look at the roof.

We were very pleased with the work. The workers were very professional and considerate. They showed up on time and worked until the job was complete. And they cleaned up after themselves! I would definitely hire them again.

Went well. All the work was completed on time and on cost.

Description of Work
Fixed some roof issues i was having.

Arrived on time, gave me a quote, and set a date to do the work. Arrived and cleaned two of my roofs of mildew. Did a great job and the roofs look nice and clean. Would use them again

My roof had two layers of shingles with the top layer being more than twenty years old. Jim and his crew took the old layers off and put new fifty year shingles. The finished product looks so good and they were very professional and great to deal with. I would recommend Barrett Builders to any of my friends and family.

Description of Work
Tear off two layers of old roof and replace with new shingles.

I live near many trees. My roof was discolored with dark streaks. Barrett understood that the roof needed to be treated carefully and delicately. They came out promptly and did a wonderful job, exceeding my expectations.

I did not rate them on price because I haven't compared prices. Jim returned my call the same day I called. He came out within a day or 2 to give me an estimate which I thought was fair. A week or so later someone came out and cleaned the roof, parts of which were extremely mossy. A couple of weeks later the zinc strip was installed on the roof that had the most moss. I liked that Jim was responsive, licensed and insured. He did a good job of explaining what they would do and the results we could expect. Also, he did not attempt to upsell; we asked for the zinc strip he didn't try to talk us into it.

Description of Work
Cleaned the roof using chemicals, not pressure washer. Added a zinc strip to our porch roof.

The roofing did not last as long as was represented. The contractor did not accept responsibility for the material. The roof was replaced by another roofer.

Description of Work
Roll-type roofing was installed on an almost-flat section of the roof.

All went well and promptly except for some delays due to bad weather.

Description of Work
Very good job. Took longer than anticipated because of some rain, but no problem with that. Price was good. The job was very well done. I am very satisfied. The job required removal of the old roof. No underlayment damage was found, fortunately. Cleanup was adquate. Provided a written estimate. Their equipment was modern and in good condition. Very good attitude of all involved. I recommend this company.

The main front room was built around 1984. The 3 windows (2 southern face, one northern) were already used when installed and likely from the mid-1970's, single pane. They were badly weathered and not very weather tight. The front door was at least 15+ years old- rusted out, sun damaged, etc. Not weather -tight or efficient. Randy scheduled the crew for 8:30am, and they were waiting for me when I came in at 8:00am. They replaced the door and all the windows. The only difficulty was with the age of the building- walls and windows out of plumb. They finished the final interior work on the windows on July 3rd. For the door, they made sure the new concrete sill was at an angle like a ramp so customers wouldn't stumble or trip. They finished around 5:30, having taken a short lunch break.