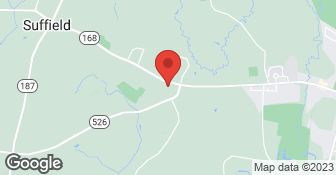 We are a design build company providing our services in Northern CT and Western MA. We design and install hard capes ranging from pavers to natural stonework. We custom build outdoor kitchens and fireplaces. We are NCMA & ICPI certified. We are also a Belgard authorized contractor and Techo-Pro....

showed up when he said he would for both estimate and job. work completed promptly and well done. would not hesitate to use again or recommend.

Lee dug out some grass areas to lay down a stone parking area we needed to expand our parking. It was not a huge job but Lee did a great job. Was very thorough, clean and it came out exactly how we wanted.

Fantastic. I wasn't present when they did the work but the results were obvious that a professional team had done a perfect job and to my exact requirements within reasonable cost.

Description of Work
Completed the blue stones in our patio to level them and put in sand that is solid between stones. They also finished the south end of the patio by putting in end rocks and shortened the west stone to match the exact location requested.

We got a fast quote from Lee and then even faster response for doing the work. He was already in the area with his machinery and was at our house within 2 days of agreeing to the contract. Patio was done beautifully and we can't wait to spend numerous evenings outside enjoying the fire pit. He leveled out some imperfections around the patio and filled in holes that were created from numerous trips to the back yard around one area. We couldn't be happier!

Lee is entirely professional and outstanding to work with. We contacted Lee based on a project he completed for a good friend of ours. His design for our back yard project was creative and tasteful. He developed computer generated pictures of the proposed project so we could see what we were getting into. He was attentive to our concerns and brought forth a design that really met our needs and hopes. If we remember correctly, the first project was approximately 6 weeks, due to the large scope. The team executed the work beautifully. They were consistently on time, with high standards for craftsmanship. The budget ended up being higher than anticipated, but that was because we loved what he was accomplishing, and so we added new features to the original design. When it came time to select the plantings for all our projects, he took us to the nursery on several occasions to pick out just the right specimens. We loved his stonework, and asked him to return the following summer to create a set of front steps for our home. He connected us with a contractor to complete the porch overhead, which worked out beautifully. Then the next summer, we needed to embark on a major landscaping effort due to the October snow storm which destroyed many of our plantings. Lee did a tremendous job with exceptionally large trees and bushes. He created a truly beautiful front yard planting scene using 6-8 very large evergreens, and also replaced a very large row of arborvitea hedges. Because the company does a beautiful job, a prospective homeowner may need to wait a bit for the project to begin. It will be worth the wait. And once they begin, they will be dedicated and earnest until the project is completed.

Description of Work
CS Landscaping has completed three major projects for us. The first involved creation of two large goshen stone patios, complete with water features and lighting, for our back yard. The second, smaller project, was completed the next summer, and entailed creation of a set of blue stone front steps and a front porch (constructed by a contractor he recommended). We loved both final products so much, we then had CS Landscaping serve as the contractor for a major planting project on both sides of our house the following year.

The contractor was able to start the work ahead of the original schedule. There was full communication during all aspects of the project. Every member of the crew was extremely polite and professional. The project was finished in 3 1/2 days in spite of weather issues and an originally unplanned step that was needed to meet code requirements. When cracks appeared in the asphalt apron from the driveway as a result of the tree removal, a quick design change was made (which I believe was more appealing than the original design) with no increase in material or cost. The cleanup was meticulous, and the results were much more than expected. This company also had the best warranty of all that we got estimates from. I would definitely recommend them.

Description of Work
The fence was taken down and 1 yew tree was removed. The existing front patio/walkway was excavated. Pavers were installed per design & layout and swept with sand. A new concrete step was installed. The fence was re-installed.

Our project involved removing and old retaining wall, walkway and front steps, and installing a new two tiered Goshen Stone retaining wall, with integrated steps and walkway. In addition, we added on a new front porch, which had two columns that were veneered with Goshen stone. Lee met with us in April to discuss the project and enter a bid. Lee spent two hours with us going over the details of the project and suggesting ideas. We met with 5 other landscapers, and while most of them required multiple calls to get answers to questions, or to come up with a quote, Lee was always responsive, and extremely helpful throughout. Several times I would email Lee with a question around 8 pm, and he would respond that same evening. When we asked Lee if he could bring over samples, he dropped them off that night, or first thing the next morning. Once the project started, Lee's crew was very courteous, and made an effort to keep the site as clean as possible. I get home from work late, so most nights I would get home after the crew was gone for the day. But if I called Lee with questions, he always responded that same night. Once, I had a question on a Friday night, and Lee came over first thing Saturday morning to take care of it. The work was done on time, and on budget. PLus Lee did several extras without me even asking. For example, part of the project included expanding part of my driveway, which Lee did. But then he took the time to fix a number of cracks and potholes in my driveway with the leftover asphalt. I am incredibly impressed both the workmanship and the customer service. I would happily recommend CS Landscaping to anyone.

" At Chaput Natural Stone & Pavers LLC, our team strives to deliver a superior product to each project. We constantly focus on the finer custom detail and set ourselves apart from any others in the field. We enjoy what we do and warranty our work from the ground up. A vast majority of projects undertaken are through recommendation by previous clients. We will work closely with you to turn your investment and vision into a reality. You can have the peace of mind knowing that we are licensed, insured and a member of ICPI"  …

We specialize in all types of masonry. We fulfill all your masonry needs. Give us a call so you can see what we can do for you.  …

All statements concerning insurance, licenses, and bonds are informational only, and are self-reported. Since insurance, licenses and bonds can expire and can be cancelled, homeowners should always check such information for themselves.To find more licensing information for your state, visit our Find Licensing Requirements page.
All skilled traders and home improvement contractors operating in the State of Connecticut are required to be licensed or registered by the State Department of Consumer Protection. License or registration identification is required to be on all advertising, business cards, signage, and contracts. You can check to see if a contractor or tradesperson is licensed or registered by going to:https://www.elicense.ct.gov/
General Information
Free Estimates
ask for details
Eco-Friendly Accreditations
No
Payment Options
Check, Visa, MasterCard
Senior Discount
No
Warranties
Yes

No, CS Landscape Design & Construction Inc does not offer a senior discount.

Are there any services CS Landscape Design & Construction Inc does not offer?