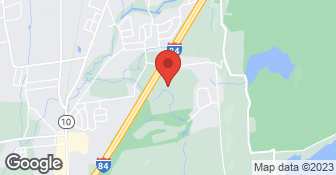 CT Complete Chimney is a full-service certified and licensed chimney contractor with twenty years of experience in all aspects of Chimneys. You can count on CT Complete Chimney for speedy reliable service when you need it most. No job too big or to small. We offer affordable solutions for everyone. Our Chimney experts are highly skilled and have all undergone rigorous training. Protect your investment home and family with a reliable chimney ....

We have been serving the area of Hartford, Connecticut for over 16 years - specializing in masonry projects. Our company's mission is to offer our customers the best service - fast and at affordable prices. All our employees have vast experience in the masonry field, and are able to offer their knowledge to improve your home! To see more examples of our work check out Facebook - Tani's Masonry -- https://www.facebook.com/tanis.masonry?fref=ts  …

These guys are awesome, hands down. They came to my house quickly and did a full inspection and quote the same day. Started work two weeks later and rebuilt both of my crumbling chimneys beautifully. Nelson, Kevin, Segundo, and Carlos - you are all excellent!

Hired CT Complete Chimney in October 2020 to fix active chimney leak and rebuild chimney. Since work was done leaks have continued and worsen. We have reported leaks in four different times and no fix has been done. As the previous review pointed out, Owner- Nelson and Foreman Kevin are blaming the issue on the roof- There are no leaks anywhere in our home except for the chimney. Step flashing was not installed and the lead barely makes the roof line. When this was explained to both owner and foreman they are looking to add on extra charges for a job that should have been done from day one. As a homeowner and female, the most recent interaction with the owner Nelson and Kevin was disrespectful and unprofessional- hanging up the phone, yelling in public and believing that their conduct is appropriate is not acceptable. My request to have our chimney leak fixed is not unreasonable. That's what we hired them and paid them for. CT Complete Chimney refuses to address the issue while they claim to guarantee their work for 10 years. For anyone looking to do chimney work and repairs, I strongly advice not using this service. I will keep this post updated and hope that CT Complete Chimney Lic/Reg #0671257 located at 96 Dunham Place, Southington, CT commits to repairing the issues they have caused and for the owner Nelson and his foreman Kevin to treat their employees, homeowners and females with courtesy and respect.

We had company perform all recommended services in order to fix the leak from the chimney. Company performed a full inspection prior to us hiring them. Told us they guarantee their work. So here is where you be careful. First big rain storm after work was completed the chimney leaked! Called company they came out and inspected. Now stated the leak was from an issue with the flashing (which we had caulked per their recommendation and inspection). States roofing material under the flashing needs to be replaced and the flashing also. How was this not caught when the original inspection was done? Company stated they could fix it for an additional amount (a significant amount). Felt the work should have been guaranteed and they should have known about flashing the first time. They bait you with one price, do half a job on a fix we didn't obviously need since it is still leaking, then rob you again to fix the right way. Very unprofessional. We were told it was not his problem??? Will be pursuing legal action.

CT Complete Chimney came and evaluated condition of chimney from 1969. Said I needed a complete rebuild but flashing was fine. I got new roof in 2016 but flashing still original. When work done, did not do entire chimney (22 of promised 30 courses), though expected full payment. Leaks continued, worse. They returned and replaced flashing. Leaks worse. Cutting my losses now and will not have them here again. Terrible cleanup; only reason I did not give Fs across the board is because the two young owners came back to detail cleanup when I refused to pay until it was done and bricks sealed (also promised). However, these two guys do not do any of the work themselves. They hire hispanic masons, probably for very little, who may or may not be fully qualified for the work. Certainly no one figured out the problem before partial reconstruction of chimney. Is the flue good? They say so. But they said the flashing was fine too. They did not pull a permit or contact building inspector (required in Massachusetts). I've since found they do even not have a permit to work in MA. I must now pay someone else to take entire thing down and start over, plus clean and tuck point the interior, if not rebuild from ground up inside the walls of the house. Contacting Attorney General's office on consumer protection and fraud. These clowns should stick to chimney sweeping and would be advised that refunding me will cost them less in the long run.

Description of Work
Chimney was leaking and need repair or rebuild

Scheduled an appointment that was convenient for me. Called on that day to say he was running a bit late, arrived shortly thereafter. Got the job done quickly and professionally. ****Update, six weeks later**** I awoke during a rainstorm and heard dripping inside the chimney cavity. Sure enough, there was water on the floor in the basement at the base of the chimney. I purchased roofing sealant at Home Depot and got on the roof myself. The previous sealant was visibly pulled away from the chimney bricks. This was definitely not something that had occurred in the six weeks since they had been there. Also, the old clay liner tile that protrudes above the chimney cap is falling apart. This is not a functional issue, as there is already a metal liner in the chimney. But it is an opportunity for pests to enter. I am very disappointed that they did not bring these two items to my attention at the time. Especially the sealant, since that is a critical issue.

Thank you for your business and review, we appreciate it!
2.0

On the original day, they showed up as scheduled. When they looked at our chimney, they said it would need a 40ft ladder, which they didn't have with them, and that they would have to return on Saturday with right equipment to have it done. Saturday came and didn't receive a call in AM saying when we should expect them. By afternoon, I started calling them to find out when they would be coming. After several messages/calls, someone called me an hour later. I was told they didn't have our house on their list and they didn't have 40ft ladder with them so they would have to reschedule. They have now wasted 2 of my days off when I could get fire wood and still don't have a fire to heat my house.

Description of Work
Plan was to have chimney inspected and cleaned

[member name removed], very sorry the normal secretary had a leave of absence in our busiest part of the season once again I apologize for the confusion with the wrong ladder. Yet like I said I want to try an make everyone happy your next cleaning is on us if you would allow us back out there, Thank you the owner Nelson.
5.0

A technician was sent out a few days after they received my message. Very courteous and professional, although works were not performed yet but definitely will use them in the future.

Thank you for your business and review, we appreciate it!
5.0

Chose them as the lowest cost of 3 bids for the job. They showed up on time, completed the job quickly and without issue. Quality appears good but I admit I know nothing about chimneys. Was impressed that they went out of their way to find a brickyard with a close match to my existing chimney.

Thank you for your business and review, we appreciate it!
5.0

Started early in the morning and didn't finish until 630 at night. Everything was cleaned up and the chimney looks great.

Thank you so much for your review, we appreciate it!